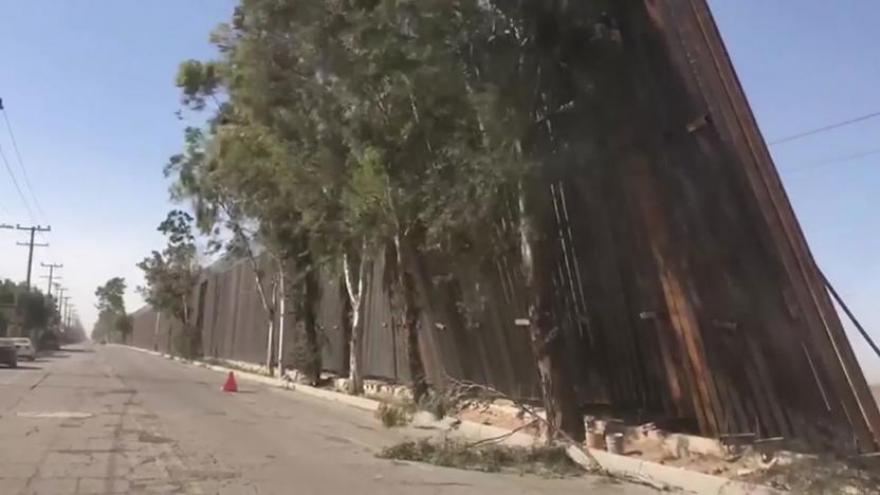 Newly installed panels from the US border wall fell over in high winds Wednesday, landing on trees on the Mexican side of the border.

(CNN) -- Newly installed panels from the US border wall fell over in high winds Wednesday, landing on trees on the Mexican side of the border.

The area is part of an ongoing construction project to improve existing sections of the wall.

Agent Carlos Pitones of the Customs and Border Protection sector in El Centro, California, told CNN that the sections that gave way had recently been set in a new concrete foundation in Calexico, California. The concrete had not yet cured, according to Pitones, and the wall panels were unable to withstand the windy conditions.

The National Weather Service reports that winds in the area gusted as high as 37 mph Wednesday. Video from CNN affiliate KYMA shows the metal panels leaning against trees adjacent to a Mexicali, Mexico, street as the wind whips up dirt from the construction site on the other side of the border.

"We are grateful there was no property damage or injuries," said Pitones.

Customs and Border Protection says local Mexicali officials diverted traffic from the area of the accident, and the agency is working with the Mexican government on the next steps to right the wall. Pitones said it is not currently known how long the construction work in the area will need to be suspended in order to allow for cleanup.

Three years into his presidency, President Donald Trump's signature campaign promise has faced a host of legal and logistical challenges. Even with funding, the administration will have to contend with private landowners whose property may be seized to build barriers along the border.

Trump has sought to pull hundreds of millions of dollars from several government accounts as his administration looks to construct 450 miles of barriers in the ramp-up to the presidential election.

Earlier this month, the administration announced that the wall had reached the 100-mile mark, the majority of which was replacing barriers with newer, enhanced designs, and around half a mile was constructed in the Rio Grande Valley where no wall previously existed.

The White House has pushed for construction on the US-Mexico border to be dubbed new wall, according to a former administration official. There was a "constant drumbeat" from the White House to call it "new wall" within the Department of Homeland Security, the official added. "There is a lot of pressure on the President to deliver in the campaign promise."

Acting Customs and Border Protection Commissioner Mark Morgan has previously said he feels "no pressure from the administration to build more miles of wall."