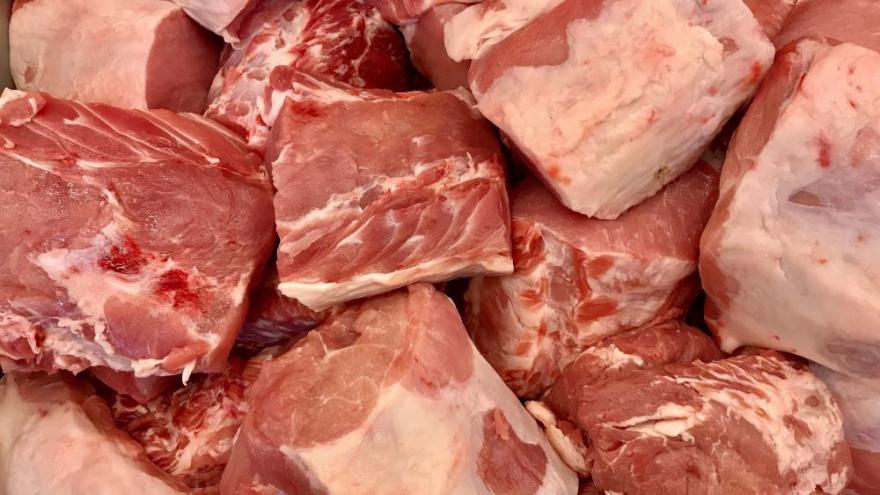 With meat-processing plants across the country shuttering due to the coronavirus pandemic, pork producers are asking the Trump administration to consider buying large quantities of meat, and other livestock farmers are seeking answers about the kind of support they can expect to receive from the latest stimulus bill.

(CNN) -- With meat-processing plants across the country shuttering due to the coronavirus pandemic, pork producers are asking the Trump administration to consider buying large quantities of meat, and other livestock farmers are seeking answers about the kind of support they can expect to receive from the latest stimulus bill.

The closure of several major facilities -- including one of the largest pork-processing facilities in the US and a major beef plant in Colorado -- has put pressure both on the supply of popular proteins for sale across the country and on the farmers who raise livestock for slaughter.

Meat-processing plant closures are threatening more than just the supply of meat on the market; experts say they are also threatening the farmers who could soon have more cows, pigs or other animals on their hands than they can afford to feed or house.

"You see pig values plummet significantly, so for many of our farmers, right now it costs more to care for the animal than the value of the hog," said Jim Monroe, a spokesperson for the National Pork Producers Council. "So our farmers are in a dire situation."

What the Agriculture Department will do with the $9.5 billion for agriculture producers that Congress included in the stimulus bill passed late last month is an open question.

Agriculture Secretary Sonny Perdue tweeted last week that his agency is "using all financial resources we have been given to develop a program that will include direct payments to farmers & ranchers hurt by COVID-19 & other procurement methods to help solidify the supply chain from producers to consumers."

The program, however, has not yet been finalized. "Details on the program will be forthcoming shortly," a USDA spokesperson said Tuesday.

Some industry insiders have warned of a potential meat shortage on the horizon; others have said the US is far from running out of protein while highlighting other consequences of plant closures.

Monroe said because pork producers operate under a "just-in-time" production system, when one group of pigs is ready to be harvested, another is right behind it. When meat plants close, the live animals can pile up.

"We are calling for massive USDA pork purchases as one solution to this," Monroe said. "If the USDA came in and purchased, you know, a large amount of pork, that would go a long way towards relieving this capacity issue."

The closure of Smithfield Foods' pork-processing facility in Sioux Falls, South Dakota, on Sunday touched off a new wave of fears about the food supply given the increasing numbers of sick or absent workers across industry plants, even those that for now remain operational.

Kenneth Sullivan, CEO of Smithfield, said in a statement that the shutdown of meat-processing plants "is pushing our country perilously close to the edge in terms of our meat supply."

"It is impossible to keep our grocery stores stocked if our plants are not running," Sullivan said. "These facility closures will also have severe, perhaps disastrous, repercussions for many in the supply chain, first and foremost our nation's livestock farmers. These farmers have nowhere to send their animals."

In addition to the Smithfield plant, several other facilities have recently closed their doors. JBS USA, a massive beef and pork producer, has shuttered two of its plants -- including a major beef facility in Greeley, Colorado, that the company announced on Monday it was temporarily taking offline after two employees died of Covid-19 and dozens more tested positive. Tyson Foods, another top meat producer, also recently closed a pork plant in Iowa.

Larger animals, but not empty shelves

Don Close, an industry expert at RaboResearch Food & Agribusiness, said consumers aren't likely to see meat shortages in the short term as long as the majority of processing plants remain operational, even if they have to scale down production.

"The big fear factor I have today is if we get into a scenario where we outright close a bunch of these processors all at the same time, it really gets scary really fast," Close said. "If we were to have one or two more of the really big beef plants closed, that would cause big grief."

Close noted that another problem with plant closures, beyond the rising numbers of animals left on farms, is that animals who aren't harvested will continue to get bigger -- and putting that additional meat on the market will drive prices down.

"When we are behind in slaughter... those animals continue to gain weight, so we are including both numbers of head and tonnage of product on the market," he said. "It puts tremendous pressure on farmers."

Not every sector of protein production is calling for USDA purchases or warning of empty grocery store shelves, however.

Colin Woodall, CEO of the National Cattlemen's Beef Association, stressed that the country is not facing a beef shortage due to Covid-19. But he said the loss of processing facilities can force ranchers to pay to feed and care for cows that pile up in their pastures.

"It is a significant economic impact to the cattle producers," Woodall added.

Lawmakers in some agriculture-heavy states pressed Perdue earlier this month to use some of the stimulus money for "targeted, temporary, equitable relief to cattle producers."

"While we do not know what the full market impact will be for the various commodities produced in our states, we recognize there is an immediate need for assistance for our cattle producers," wrote the bipartisan group of 145 lawmakers.

Woodall said the administration's efforts to address problems caused by the closure of processing facilities should include helping shuttered plants with access to coronavirus tests, masks and other personal protective equipment for workers hoping to return to the job.

"For us it's just continuing to have the government across the board -- not just USDA, but all the way to the White House -- have support for these packing plants."

A USDA spokesperson said the department is focused on helping to maintain the food supply chain as facilities struggle with worker absences and closures.

"USDA recognizes and supports the efforts of private industry and companies to maintain operational status of their facilities while also maintaining the safety and health of their work force. USDA will continue to support a locally-executed, state-managed, federally-supported emergency response system," the spokesperson said.

CORRECTION: This story has been updated to correct the name of the spokesman for the National Pork Producers Council. It's Jim Monroe.