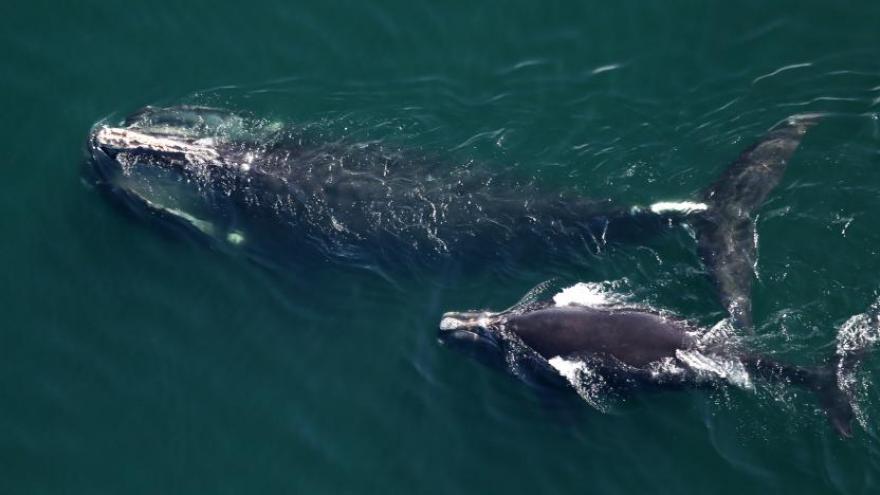 One of the rarest marine mammals in the world, the North Atlantic right whale, has declined 8% in the population over the past year, which researchers call deeply concerning for the species' survival.

(CNN) -- One of the rarest marine mammals in the world, the North Atlantic right whale, has declined 8% in population over the past year, which researchers call deeply concerning for the species' survival.

The North Atlantic Right Whale Consortium announced Monday the whale's population dropped to 336 in 2020. This is the lowest the population has been in nearly 20 years, according to the consortium.

"The new population and mortality estimates for North Atlantic right whales are upsetting and alarming," said Whitney Webber, campaign director at Oceana in the United States, in a statement. "Losing nearly 10% of a critically endangered species in one year is drastic and should be a wake-up call that the situation facing these whales is more dire and urgent than ever before."

The North Atlantic right whale is one of the world's most endangered large whale species, according to the National Oceanic and Atmospheric Administration (NOAA). The species has been listed as endangered under the Endangered Species Act since 1970.

Over the past decade, the whales' population has been on a downward trajectory and declined 30%, according to the consortium. In 2011, the species' population was at its highest with an estimated 481 whales.

"There is no question that human activities are driving this species toward extinction," said Scott Kraus, chair of the consortium, in a news release. "There is also no question that North Atlantic right whales are an incredibly resilient species. No one engaged in right whale work believes that the species cannot recover from this. They absolutely can, if we stop killing them and allow them to allocate energy to finding food, mates, and habitats that aren't marred with deadly obstacles."

Now human interaction is continuing to impact the species' decline.

"We as humans have put these whales in the predicament they are in, and we have the ability to help them out of it," said Heather Pettis, associate scientist in the New England Aquarium's Anderson Cabot Center for Ocean Life and executive administrator of the consortium. "Broad collaboration and a long-term commitment to ensuring this species' survival is required and urgent actions to prevent entanglements and collisions with vessels must be implemented."

Conservation organizations recommend that reducing the amount of vertical lines from fishing gear in the water and requiring ships to slow down will help save the species.

Calving season, which begins in mid-November and runs through mid-April, is extremely important for the species to regain population numbers. There are fewer than 100 females remaining.

Right whales do not reach reproductive maturity until about 10 years of age, according to Oceana. And they typically produce only one calf after a yearlong pregnancy every three to five years. But NOAA says it has noticed that on average, females are now having calves every six to 10 years.

One of the reasons biologist believe females are calving less often, according to NOAA, is the additional stress that entanglements have on the whales.

In 2021, scientists tracked 18 mother-calf pairs, a number that is cause for optimism yet well below the annual average of 23 pairs from the previous decade, according to the consortium.