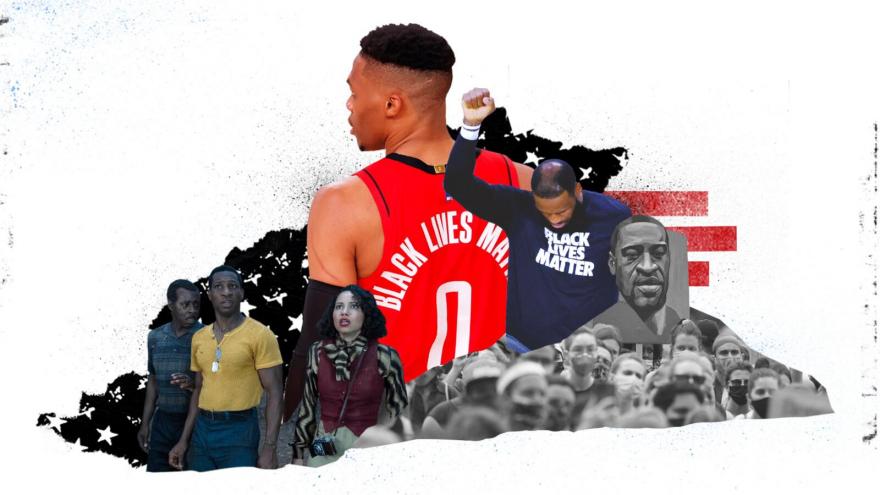 Popular culture made it impossible to ignore America's reckoning with racism in 2020.

(CNN) -- Whether you lived in rural America, the bustling streets of a big city or even another country, you couldn't ignore the nation's racial reckoning of 2020 -- and how Black Lives Matter resonated throughout popular culture.

From the basketball arenas and football fields, to Hollywood movie sets and grocery store shelves, the country was awakened to the inequities that Black and brown people have known for generations.

The death of George Floyd was the tipping point.

As video of the brazen police killing of Floyd spread through social media, protesters poured into the streets demanding racial equality. Civil rights leaders and historians say the movement's reach was incomparable to uprisings of the past.

"I think the Black Lives Matter movement is probably the first worldwide human rights movement that I've seen," civil rights leader Andrew Young told CNN. "I mean, everybody in the world saw George Floyd die. And there were people marching for Black Lives Matter in New Zealand, in Europe and Africa, some parts of Latin America. Because the authority of law enforcement is almost a problem everywhere."

After Floyd's death, companies and professional sports teams were suddenly pledging to remove racist names and branding, Nike and Twitter made Juneteenth a company holiday, Confederate monuments were toppled and LeBron James denounced the killings of unarmed Black people.

And this was all happening as a global Covid-19 pandemic was ripping through the country, disproportionately killing people of color.

The weight of the parallel crises led to a cultural shift that made 2020 like no other year.

"It really changed the consciousness for a while of America wanting to wrestle with systemic racism, wanting to grapple with the inequities that prevailed and how best to respond to them," said Michael Eric Dyson author of "Long Time Coming: Reckoning with Race in America" and professor at Vanderbilt University. "And popular culture followed through."

How athletes changed the game

The sports world played a pivotal role in America's awakening on racism this year.

When the NBA resumed its season in July, the words Black Lives Matter stretched across both ends of the court. Most players wore jerseys with social justice messages such as "Equality" "Black Lives Matter" and knelt during the National Anthem.

James was unwavering in his demand for equality, often using Instagram and Twitter to express his frustrations with the police killings of Black people and the lack of accountability for law enforcement.

James also spoke out against racist voter suppression. This summer, James launched More Than a Vote, a nonprofit that strives to combat voter suppression and recruit poll workers in vulnerable Black communities.

Karlos Hill, professor of African American Studies at the University of Oklahoma, said support from the NBA helped keep the issue of racial inequality alive.

"They made it impossible for those who love sports and love the NBA to look away," Hill said. "Particularly for White fans, if they wanted to watch LeBron James be one of the greatest athletes in the world, they also had to understand an issue that he really cares about it."

The WNBA also responded, dedicating its season to Breonna Taylor and the "Say Her Name" campaign.

New this season, they introduced a Social Justice Council of players and activists to push conversations around social issues forward. One team wore shirts with seven bullet holes in the back, a testament to the number of times Jacob Blake was shot in the back by a police officer in Wisconsin.

The NFL stood up against racial injustice painting "End Racism" in the end zones of its fields. It also opened the season with the Black national anthem "Lift Every Voice and Sing."

"With George Floyd and the international outrage around how he was brutally murdered, it created a narrative that the NFL couldn't ignore anymore," Hill said.

The league's stand against racism came three years after teams decided not to sign former San Francisco 49ers quarterback Colin Kaepernick, who was criticized for kneeling during the National Anthem.

Kaepernick said he kneeled to protest racism and the oppression of Black people. Kneeling in protest became politicized with President Donald Trump saying in 2017 that players who take a knee should be fired.

NFL Commissioner Roger Goodell admitted in August that he wished the league had "listened earlier" to Kaepernick when he was protesting.

Major League Baseball also confronted systemic racism with Cleveland's team announcing that it was removing "Indians" from its name after decades of protesting by Native American advocates.

"This is just another extraordinary win for Native people and I think for everyone in our fight against systemic racism," said Crystal Echo Hawk, executive director and founder of IllumiNative. "These racist native sports mascots fuel racism and cause psychological harm to Native American children."

The NFL's Washington team announced in July -- at the height of the racial reckoning-- that it was removing "Redskins" from its team name.

"We wear Black Lives Matter to affirm human decency," members of the team said in a statement posted on social media ahead of the game. "We protest against racial injustice and police brutality against Black people. We protest against the racist infrastructures that do not provide equal opportunity for Black and brown people to fulfill their dreams, including playing on this team."

Additionally, tennis star Naomi Osaka wore face coverings to her matches displaying the name of a different Black victim of alleged police or racist violence in the US including from Breonna Taylor and Tamir Rice.

Entertainers and celebrities also took a strong stance against racism in 2020 with letters, essays and social justice initiatives.

After news of Ahmaud Arbery's death drew national attention, musicians Jay-Z, Alicia Keys, Meek Mill and Yo Gotti released a letter to Georgia demanding swift justice for Ahmaud Arbery, a 25-year-old black man who was shot and killed in south Georgia in February.

"As a society we can no longer pretend that the racial inequities, which exist in every facet of our lives, don't invariably lead down the path to poverty, violence and death," the musicians wrote in the letter.

Pharrell Williams wrote an essay in TIME titled "America's Past and Present Are Racist. We Deserve a Black Future" that drew parallels between the history of America and the racial reckoning of 2020.

He wrote that "America was founded on a dream of a land where all men were created equal, that contained the promise of liberty and justice for all." "But all has never meant Black people," WIlliams continued.

Some celebrities responded to the uprising by launching businesses that catered to the Black community.

Glover said the bank specializes in financing Black and Latinx entrepreneurs who typically have a harder time securing loans from mainstream commercial banks.

Render said he wanted to create a banking system that was fair and equitable to people of color.

"Today, a dollar circulates for 20 days in the White community, but only six hours in the Black community," Render said in a written statement. "Black Americans are twice as likely to be denied mortgage loans by traditional banks, but minority depository institutions have a better track record of lending to non-White individuals."

Hollywood also drew attention to racial inequality. NBC's "This Is Us" highlighted the issue through the character Randall Pearson who discussed on the show how he was personally impacted by racism and the Black Lives Matter movement.

And the HBO series "Lovecraft Country" featured Black characters set in the 1950s who were being battling racism in the form of monsters.

Plans to change these symbols came as companies including the Aunt Jemima brand and Facebook pledged to donate millions of dollars to the Black community. Some donated to Historically Black Colleges and Universities.

Netflix also joined the movement adding a Black Lives Matter category with films and series about racial injustice and the Black experience.

God-is Rivera, global director of culture and community at Twitter, said corporations came to realize that their consumer demographic was impacted by racism and police brutality.

"This general consumer base is not just the Stepford wives and the suburbs and white America," Rivera said. "It is full of people who are affected and fighting for a human rights issue."

A pledge for more diversity in corporate America

In 2020, companies renewed commitments to racial equality by creating positions dedicated to diversity and inclusion and promising to hire more Black people.

In September, Target announced that it would increase its Black workforce by 20% in the next three years.

Rivera said the fight for racial equality was magnified by social media, particularly Black Twitter which is a network of users that draw attention to Black issues.

A survey by the Pew Research Center found that 23% of adult social media users said social media influenced them to change their views on an issue, with some citing Black Lives Matter.

"It showed how that shift happened and how it became such a huge part of public discourse," Rivera said.

Experts and activists say the nation's fight for equality will require athletes and other leaders in popular culture to remain committed to the cause.

"I have to be optimistic, but I know there is so much work to be done," Newsome said. "What I really want to see is this continued commitment to change."