Pope Francis touches down in Baghdad, hoping to boost an ancient Christian church and a war-torn country 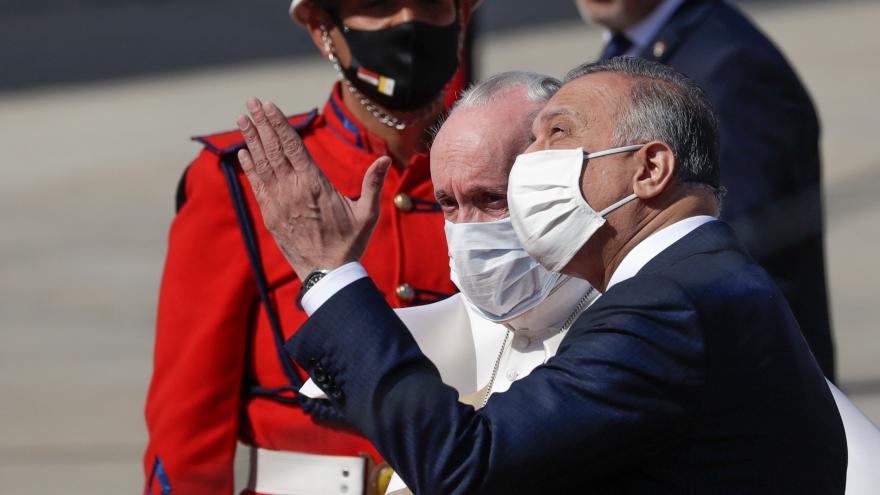 (CNN) -- Pope Francis landed in Iraq on Friday for a historic tour of the war-ravaged nation, where he is meeting with members of the country's dwindling Christian community, aiming to draw attention to their plight.

The trip, which marks the first-ever papal visit to Iraq, also includes meetings with the country's top political and religious officials. It is the pontiff's first trip outside of Italy since the start of the Covid-19 pandemic.

"I am happy to start trips again and this is a symbolic trip. It's a duty," the Pope told journalists traveling with him on the papal plane. "It has been a martyred land for too long."

On Friday, the pontiff held meetings with Prime Minister Mustafa al-Kadhimi and President Barham Salih. Rows of traditional dancers, none of whom wore masks, greeted the Pope as he arrived at Baghdad International Airport.

Pope Francis and his entourage have all been vaccinated against Covid-19.

He later met with clerics and otherofficials at a Baghdad church that was the site of a bloody 2010 massacre. A crowded of excited congregants greeted Francis in the churchyard, singing "the Pope is here, the Pope is here."

The Pope sat on a throne under a towering collage of the parish members who died in the terrorist attack. "We are gathered in this Cathedral of Our Lady of Salvation, hallowed by the blood of our brothers and sisters who here paid the ultimate price of their fidelity to the Lord and his Church," the pontiff said.

The Pope said he has come to Iraq as a "pilgrim."

"I come as a penitent, asking forgiveness of heaven and my brothers and sisters for so much destruction and cruelty," said the pontiff during a speech on Friday. "I come as a pilgrim of peace in the name of Christ, the Prince of Peace. How much we have prayed in these years for peace in Iraq."

Francis was widely expected to cancel the visit after a surge in coronavirus cases gripped Iraq in recent weeks, and a spate of new rocket attacks deepened security fears. But the Pope insisted that the visit go on as scheduled, referring to Iraq's ancient Christian community as "that martyred Church."

"For some time I have wanted to meet that people who suffered so much, Francis said on Wednesday. "The people of Iraq are waiting for us. They were waiting for St. Pope John Paul II, who was not allowed to go," he added, referring to a planned trip in 2000 which was canceled after a breakdown in talks between the Vatican and then President Saddam Hussein.

"The people cannot be let down for a second time. Let us pray that this trip can be carried out well."

Iraqi officials have hailed the visit as an important moment for the country, while privately admitting that the timing of the trip has proved a challenge for authorities.

Iraq has imposed a total curfew for the entirety of the four-day papal visit in an attempt to minimize health and security risks.

One of the key parts of the Pope's itinerary is a Saturday visit to Grand Ayatollah Ali al-Sistani, a widely revered Shia cleric. Sistani will receive the pontiff at his residence in the holy city of Najaf, to the south of Baghdad.

The papal meeting with the 90-year old Sistani -- who is rarely seen in public -- can be seenas one of the most significant summits between a pope and a leading Shia Muslim figure.

The meeting with Sistani is expected by some to serve as the Shia Muslim component of the pontiff's efforts to bolster interfaith relations.

'I hope the Pope stays for a month'

The Pope is also scheduled to visit several Iraqi areas and cities linked to the Bible, such as the plain of Ur, considered the birthplace of Abraham.

He is believed to have long wished to go to Iraq, which figures heavily in the Old Testament, and whose dwindling Christian minority has suffered greatly from the country's long cycles of violence.

Thought to be one of the oldest Christian communities in the world, prior to the 2003 US invasion, there were 1.5 million Christians in Iraq. Around 80% of them have since fled, according to leading Christian clerics there.

Members of the Christian minority, which was the target of repeated attacks by extremists, say they hope the papal visit will underscore the neglect they feel they have endured from Iraq's authorities.

Many in the country's Muslim majority, who loudly complain about government corruption and mismanagement, also have their hopes pinned on trip.

Tens of thousands of Iraqis staged months-long street demonstrations, some of which were violently quashed, in the months before the coronavirus pandemic began to spread here.

"The country needs services, security and peace," said 50-year-old Mohammed Jassem. "[The Pope] can't give us these things but we ask him to call on the leadership and the parties for these things."

"We call on him to unify its ethnicity ... the country requires unity and we hope he can bring us this," he added.

Iraqi authorities have been busy preparing for the papal visit, cleaning streets and re-paving others where the Vatican delegation is scheduled to go. New street lamps light the roads and many previously broken traffic lights are back in commission.

The irony is not lost on Iraqis. "The streets of Baghdad have become a lot better within a week," said 41-year-old shopkeeper Ahmad al-Assadi. "I wish he would stay for a month and tour all of Iraq ... maybe then they can fix the entire country."