Pope Francis says bishops should be pastors, not politicians in US debate on denying Biden communion over abortion 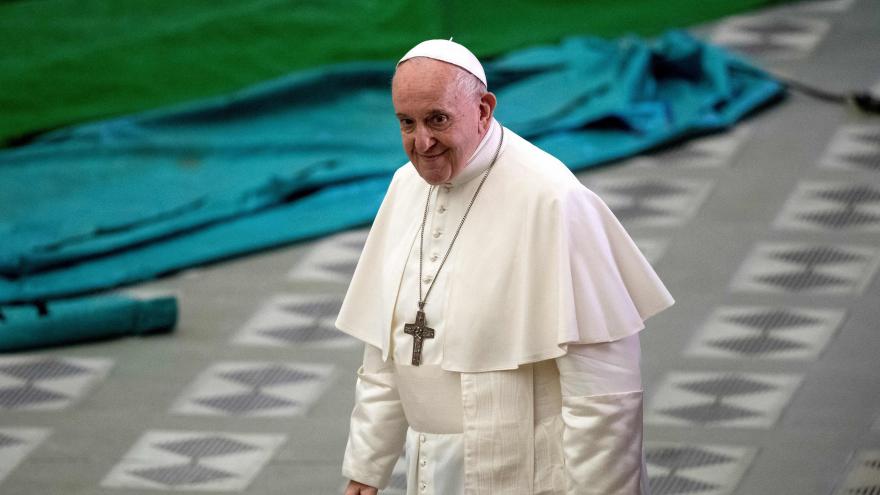 (CNN) -- Pope Francis on Wednesday said bishops debating whether to deny communion to public figures who support abortion rights, such as President Joe Biden, should make their decisions from a "pastoral" viewpoint and not a political one.

"The problem is not theological, it's pastoral," Francis told reporters while traveling from Slovakia to Rome on Wednesday. "How we bishops deal with this principle. We must be pastors, also with those who are excommunicated. Like God with passion and tenderness. The Bible says so."

His comments come amid a simmering debate within the US Catholic Church over granting communion to Catholic politicians who support abortion rights, including the nation's second Catholic President. Biden had been denied the sacrament in the run-up to the election and the issue drew new attention in June when the United States Conference of Catholic Bishops proceeded with a plan that could deny communion to such public figures, setting up a potential public rebuke of the President.

By a vote of 168 to 55, with six abstentions, the bishops had gone forward with plans for a report on the meaning of the Eucharist in the church. The vote is part of a longer process, and the Vatican would have to approve any action on behalf of the bishops.

Catholics for Choice, a liberal Catholic group that advocates for abortion rights, said at the time that it was "profoundly saddened" by the vote and condemned using the Eucharist "as a weapon of punishment."

"In a country and church already riven with tension and division, today the bishops chose to be partisan instead of pastoral, cruel rather than Christ-like," the group said. "They have chosen to disobey Jesus's command to 'feed one another,' but everyday U.S. Catholics -- 67 percent of whom oppose withholding Communion and other Sacraments from supporters of abortion rights -- will continue to know better and do better."

An abortion rights advocate and the first Catholic US president in nearly 60 years, Biden displays a devotion to regular religious services not seen from recent presidents, who were professed Christians but intermittently attended church or worshipped privately while in office.

He married his late first wife, Neilia, in a Catholic church, attends weekly Mass, and peppers his political speech with quotes from Scripture, Catholic hymns and references to the nuns and priests he learned from in school.

Pew surveys show more than half of US Catholics favor abortion rights and most American Catholics do not believe Biden should be refused communion.

"The pastor knows what to do. In every moment that he leaves the church's pastoral path he immediately becomes a politician," Francis said Wednesday.