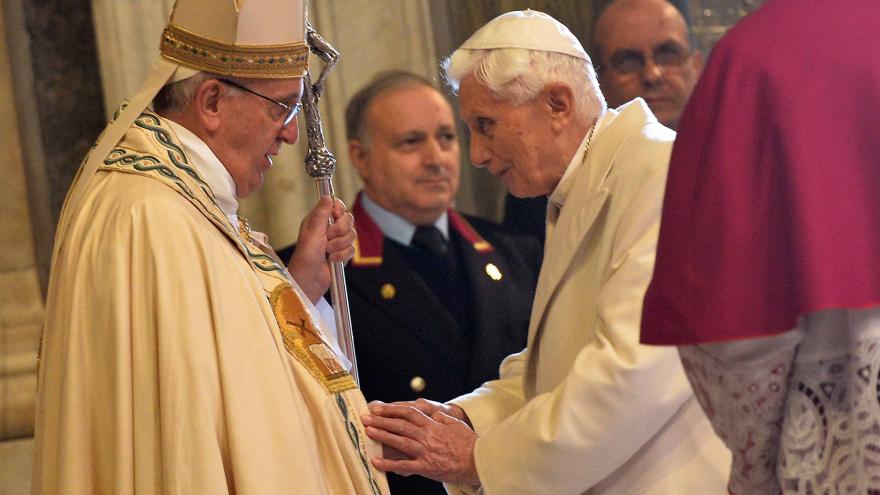 (CNN) -- Pope Francis and former Pope Benedict have received the first dose of a coronavirus vaccine, the Vatican said Thursday.

Vatican spokesman Matteo Bruni said in a statement that he was "able to confirm that within the vaccine program of the Vatican City State, to this date the first dose of Covid-19 vaccine has been administered to Pope Francis and Pope Emeritus."

The statement did not say when 84-year-old Pope Francis or his 93-year-old predecessor were inoculated. Vatican City began its vaccine program on Wednesday in a medical center set-up inside its main Auditorium Hall, where the pontiff often holds his weekly audiences. Both men are at higher risk of contracting the virus because of their age.

In recent weeks, Francis has spoken several times on the subject of vaccines. Over the weekend, he said people have an "ethical duty" to take the vaccine and confirmed he was in line to receive one once the Vatican's vaccination program got underway.

"I believe that ethically everyone should take the vaccine. It is not an option, it is an ethical choice because you are gambling with your health, with your life, but you are also gambling with the lives of others," the pontiff said in an interview with Italy's Canale 5 channel broadcast on Sunday night.

He also used his Christmas message to ask countries to share vaccines, adding that "they must be available to everyone."

"I beg all those in charge of states, of companies, of international bodies ... to promote cooperation and not competition and to seek a solution for everyone, vaccines for all, especially for the most vulnerable and needy in all regions of the globe," the Pope said during his traditional Urbi et Orbi (to the city and the world) message at the Vatican.

On Saturday, the Vatican's newspaper L'Osservatore Romano announced Francis' personal doctor, Fabrizio Soccorsi, had died as a result of "complications due to Covid."

Francis chose Soccorsi as his personal doctor in 2015, the news outlet said.

Soccorsi, 78, was hospitalized in a Rome on December 26 for a previous oncological disease, according to the Italian Bishop's Conference newspaper Avvenire. It's unclear exactly when he was last in direct contact with Pope Francis.