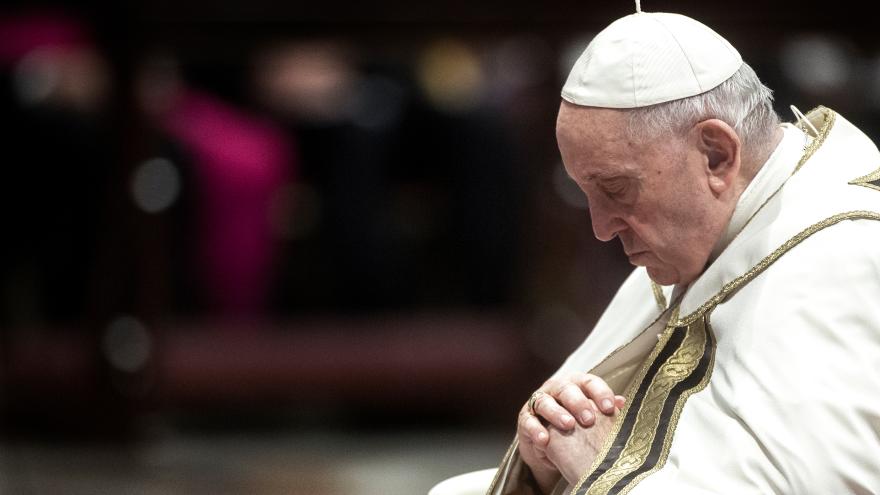 (CNN) -- Pope Francis says he has taken it on himself to rid the Catholic Church of sexual abuse, telling CNN's partner channel CNN Portugal that he was "responsible that it doesn't happen anymore."

In an exclusive, wide-ranging interview in Rome last month, the Pontiff said the church had "zero tolerance" for abuse and said that "a priest cannot remain a priest if he is an abuser."

The church's response to sex abuse scandals has become one of the defining themes of Francis' time as Pope, and he told CNN Portugal that every case of abuse within the church "hurts" him.

Multiple reports detailing decades of sexual abuse, systemic failures and cover-ups across multiple countries have been released since Francis became the leader of the world's 1.2 billion Catholics in 2013. While he was criticized for some of his actions -- such as when he defended a Chilean bishop accused of covering up a sex scandal in 2018, a decision he later described as a "grave error" -- he has since taken a firm stance on the issues and introduced some reforms.

In 2019, he abolished Vatican secrecy rules for cases of sexual abuse and put in place new rules that made it mandatory for the first time for all dioceses to set up systems for reporting abuse and cover-ups.

Two years later, he issued the most extensive revision to Catholic Church law in four decades, insisting that bishops take action against clerics who abuse minors and vulnerable adults. The rules also demanded action against priests who commit fraud or attempt to ordain women.

Addressing the topic, Francis said he didn't believe celibacy played a role in causing the abuse.

"I don't deny the abuse. Even if it was only one [case], it is monstrous. Because you, priest, you, nun, have to take that boy, that girl to God and with this you destroy their lives. It's monstrous. It is destroying lives. And then they come to you with questions. Could it be that celibacy [is to blame]? It's not about celibacy," he said.

"This is one thing about abuse, it is a destructive thing, humanly diabolical," he said. "In families there is no celibacy and all that and, sometimes, it happens. So, it is simply the monstrosity of a man or woman of the church who is psychologically ill or evil and uses their position for their personal satisfaction," he added.

The Pope also revealed that he has been in contact with the Ukrainian President Volodymyr Zelensky, speaking to him on the phone.

He said he has in the past met both Zelensky and his Russian counterpart Vladimir Putin when they visited him in Rome. But when asked what he could tell the two, the Pope said: "I don't know.

"I had a dialogue with both [of them]. They both visited me here before the war. And I always believe that in dialogue we always move forward," the Pope said. "You know who doesn't know how to talk? Animals. They are pure instinct."

Francis has been criticized for some of his comments about Russia's war on Ukraine. In a June interview with Italian newspaper La Stampa, Francis said the war "was perhaps in some way either provoked or not prevented." He said that before Russia invaded Ukraine he met with "a head of state" who "was very worried about how NATO was moving."

Last month, the Pope angered Kyiv by referring to Russian political commentator Darya Dugina, the daughter of an ultra-nationalist philosopher, as being among the "innocent" victims of the war after she was killed by a car bomb on the outskirts of Moscow.

The Ukrainian Ministry of Foreign Affairs summoned Apostolic Nuncio to Ukraine, Archbishop Visvaldas Kulbokas, to discuss Francis' statement, saying that it "unjustly" equates "the aggressor and the victim."

The Pope, who has previously indicated he would be willing to travel to Kyiv and Moscow, told CNN Portugal such a visit was "up in the air."

No Pope has ever traveled to Moscow before. Pope John Paul II traveled to Ukraine in 2001.

He said he was unable to travel at the moment because of issues with his knee, but said that his presence in Ukraine was "strong" because he sent several cardinals to Kyiv to represent him.