Pop is calling: Kids and grandkids on the line with President Joe Biden 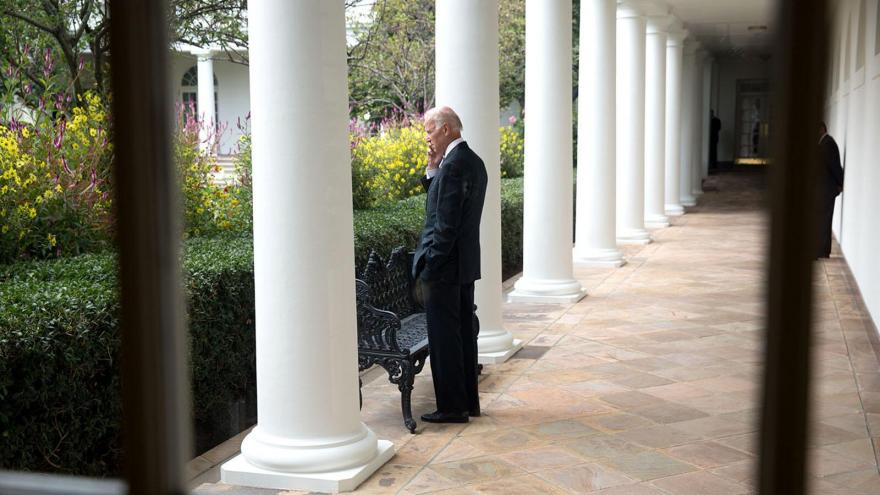 (CNN) -- Joe Biden says he has a strict rule about his phone: No matter what's happening, he always answers a call from one of his grandchildren.

Biden said on the campaign trail that he kept up with them every day of the pandemic with calls and texts, and now the ritual has carried over to his life in the White House. He checks in on his grandchildren with almost religious devotion, often reaching out multiple times a week, according to two people familiar with the first family's habits.

"No topic is off limits," one of them said, even if "sometimes the kids don't want to tell him everything."

It isn't just his family he's calling, of course. The Biden cold call is a feature of his decades-long political career in Washington, and just about every political veteran in town has gotten a surprise buzz at one time or another. And these days, he regularly picks up the phone to call key members of Congress, aides say.

But now that he's so deeply ensconced in the world's tightest security bubble, and remains somewhat sequestered because of the pandemic, Biden's phone line has become a lifeline to the people who bring him comfort. Biden alluded to that changed dynamic during a CNN Town Hall earlier this year, referring to life in the White House as a "gilded cage."

Biden, more than most, knows how tenuous family ties can be. He lost his first wife and baby daughter in a car accident in 1972, and he went on to raise his surviving sons, Beau and Hunter, with his second wife, Jill. Beau Biden died of cancer six years ago.

'SUBJECT: WHERE ARE YOU?'

The habitual check-ins with grandchildren, five of whom are of talking age, remain at minimum a text ("typically an 'I love you', or 'How are you?'" says one source) and at most a phone call.

The Defense Information Systems Agency, which oversees the agency responsible for supporting the President's communications, would not directly answer whether the President was using a secured mobile device to text and call.

"The White House Communications Agency provides the President with the communication devices and capabilities that are required for him to perform his duties," the statement said.

The texts and calls suggest how deeply he needs to know that they are OK, especially at the end of the day. His words are mostly private, but his grandchildren have shared some of them over time.

Granddaughter Naomi Biden shared several "Voicemails from Pop" on Twitter during the 2020 campaign.

"Hey Naomi, it's Pop. I just called to say I love you. We just landed in Iowa. When you get a chance let me know where you are. Get home alright, OK?" plays one voicemail recording of Biden.

The rest of the compilation shows a repeated pattern -- then-candidate Biden calling to say he loves his granddaughter, telling her where he's landed and sharing exactly what time it is.

Like many concerned parents and grandparents, when Biden hasn't been able to get a hold of his grandkids he's escalated to texting the entire Biden clan. And though Biden appears to be familiar with smartphones -- he once pulled out his iPhone to play "Despacito" on the campaign trail and has been spotted taking calls from a similar looking device since taking office -- his granddaughters still poke fun at his texting style and constant concern.

"On a day where we're all busy, he texts us, 'Just tried calling you guys. Missed it,'" Maisy Biden said in an interview on NBC in January.

"He has this weird thing where he can put stuff in bold letters," granddaughter Natalie says.

Maisy also recalled "Pop" staying up "until 10 p.m." to make sure his grandkids got to their family lake house safely, even though they say they have Secret Service traveling with them.

The President also clearly has another family member in particular on his mind: his surviving son, Hunter Biden, who has struggled with addiction in recent years. In his new book, Hunter Biden makes clear how much his father needs to check in on him.

Hunter Biden said he talks to Joe Biden "at least every night," during a CBS interview around the time of his book release earlier this month. Similar check-ins happen with the President's daughter, Ashley, and the rest of the grandchildren, Hunter Biden said.

"Usually, he calls me right before he goes to bed just to tell me that he loves me," he said of his dad.

That's what Joe Biden has long done, he said, because he "knows what it's like not to be able to pick up the phone and talk to your son."

'It will disappoint me greatly'

Much like his daily four-hour commute as a senator -- two hours each way -- between Delaware and Washington to be with his sons, frequent calls with other lawmakers were a longtime hallmark of Biden's communication style in the Senate.

Since his inauguration, Biden has maintained the habit with members of Congress, seeming to relish in direct conversations with the people he still refers to as his "colleagues." He's been on the phone with members of Congress -- advancing his legislative agenda or at least attempting to preserve his options. According to White House press secretary Jen Psaki, the President is regularly on a direct line with House Speaker Nancy Pelosi, Senate Minority Leader Mitch McConnell and one of the Senate's most moderate Democrats, West Virginia's Joe Manchin.

Maine Republican Sen. Susan Collins says she got a call "out of the blue" to try to sway her on the coronavirus relief bill earlier this year, and has also said Biden phoned her last November to congratulate her for her Senate reelection.

Allies like Vermont Democratic Sen. Patrick Leahy -- the senior-most member of the Senate -- have gotten multiple calls from the President since Inauguration Day, according to his office. And the President also phones longtime friends like Pennsylvania Democratic Sen. Bob Casey. The senator's office says Biden recently rang to wish Casey a happy birthday and talk infrastructure.

Biden's high value on maintaining a direct line on family life has also spread to how he treats his staff.

So...As vice president, Biden once wrote to his staff that he did not want any of his employees "to miss or sacrifice important family obligations for work."

"In fact," he wrote in that 2014 memo, "... if I find out that you are working with me while missing important family responsibilities, it will disappoint me greatly. This has been an unwritten rule since my days in the Senate."