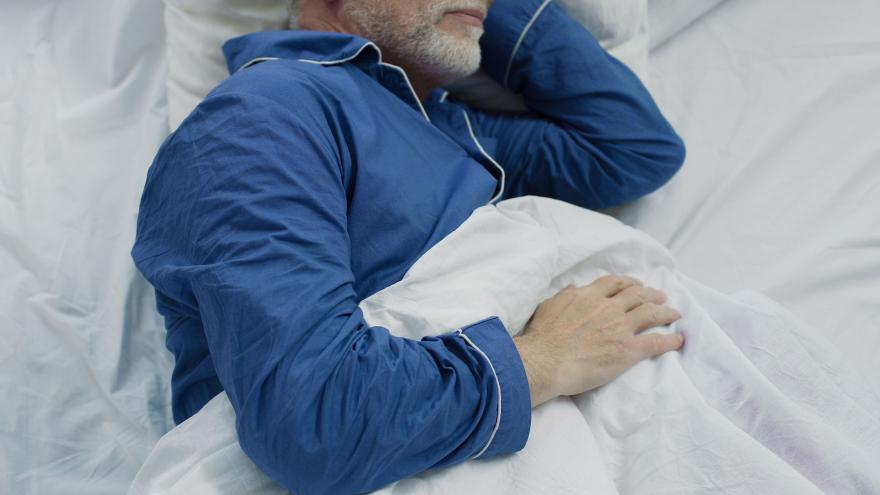 (CNN) -- Older adults who have significant difficulty falling asleep and who experience frequent night awakenings are at high risk for developing dementia or dying early from any cause,a new study finds.

"These results contribute to existing knowledge that sleep plays a very important role, each and every night, for reducing our longer term risk for neural cognitive decline and all cause mortality," said study author Rebecca Robbins, an instructor in medicine at Harvard Medical School who specializes in sleep research.

The connection between sleep, dementia and early death from any cause is especially worrisome, experts say, due to the sleep habits of Americans and people around the world. According to the World Sleep Society, sleep deprivation is threatening the health of up to 45% of the world's population.

Depending on our age, we are supposed to get between seven and 10 hours of sleep each night. But one in three Americans don't get enough sleep, according to the US Centers for Disease Control and Prevention.

In addition, 50 million to 70 million Americans struggle with sleep disorders such as sleep apnea, insomnia and restless leg syndrome, which can ruin a good night's shuteye.

The CDC calls that a "public health problem," because disrupted sleep is associated with a higher risk of conditions including diabetes, stroke, cardiovascular disease -- and dementia.

The study, published recently in the Journal of Sleep Research, analyzed data collected by the National Health and Aging Trends Study (NHATS), which conducts annual in-person interviews with a nationally representative sample of 6,376 Medicare beneficiaries.

Data from between 2011 and 2018 were examined for the new study, with a focus on people in the highest risk category -- those who said they had sleep issues "most nights or almost every night."

Self-reported sleep difficulties by participants in the study were then compared to each participant's medical records.

Because the NHATS study collected annual sleep data, the new study was able to follow the totality of sleep difficulties for each person over the entire eight years, instead of just capturing a snapshot in time. This was a strength of the study, Robbins said, because "sleep health can ebb and flow over the years."

Another strength of the study was the ability to tease apart the impact of having a good bit of trouble falling asleep versus frequent nighttime awakenings on any risk of dementia and death.

"We found a strong association between frequent difficulty falling asleep and nighttime awakenings and dementia and early death from any cause, even after we controlled for things like depression, sex, income, education and chronic conditions," Robbins said.

But it was the people who had a lot of problems falling and staying asleep that had the highest risk of either dementia or dying early from any cause.

"We found a 56% increased risk of dementia and an 80% greater risk of all cause mortality over the following eight years among those who experienced both concurrent sleep difficulties -- falling asleep or waking from sleep," Robbins said.

A 2017 study found healthy middle-aged adults who slept badly for just one night produced an abundance of beta amyloid plaques -- one of the hallmarks of Alzheimer's disease. Beta amyloid is a sticky protein compound that disrupts communication between brain cells, eventually killing the cells as it accumulates in the brain.

A week of disrupted sleep increased the amount of tau, another protein responsible for the tangles associated with Alzheimer's, frontal lobe dementia and Lewy body disease, the study found.

Yet another 2017 study compared dementia markers in spinal fluid against self-reported sleep problems, and found subjects who had sleep issues were more likely to show evidence of tau pathology, brain cell damage and inflammation. That held true even when other factors like depression, body mass, cardiovascular disease and sleep medications were taken into account.

Not getting a full seven or eight hours of sleep a night is also linked to dementia, according to a study published in April. After following nearly 8,000 people for 25 years, the study found a higher dementia risk with a "sleep duration of six hours or less at age 50 and 60" as compared to those who slept seven hours a night.

In addition, persistent short sleep duration between the ages of 50, 60 and 70 was also associated with a "30% increased dementia risk," independent of "sociodemographic, behavioural, cardiometabolic, and mental health factors," including depression, the study said.

Medical science has no current cure for dementia, but there are things you can do to reduce your risk.

Stop smoking, drink only in moderation -- if you drink at all -- eat a well balanced diet, exercise, stay mentally active and keep your blood pressure and cholesterol levels in check are excellent ways to keep brains and bodies healthy, experts say.

You can also tackle any sleep problems by training your brain for better sleep. Experts call it "sleep hygiene," and suggest setting a bedtime routine designed to relax and soothe, which includes no TV, smartphone or other blue-light emitting device at least one to two hours before bed.

Other tips include having a comfortable bed and pillow, keeping the bedroom cool, quiet and dark and avoiding caffeine and alcohol for hours before bed.

Sign up for for CNN'S Sleep, But Better newsletter. You'll get science-based guidance for sleeping better tonight and every night.

Whatever you do, don't stay sleep deprived: If you try these tips and can't seem to relax, or your sleep continues to worsen, be sure to reach out to your doctor or a sleep health professional.