Pompeo: 'I was on the phone call' with Trump and Ukrainian President 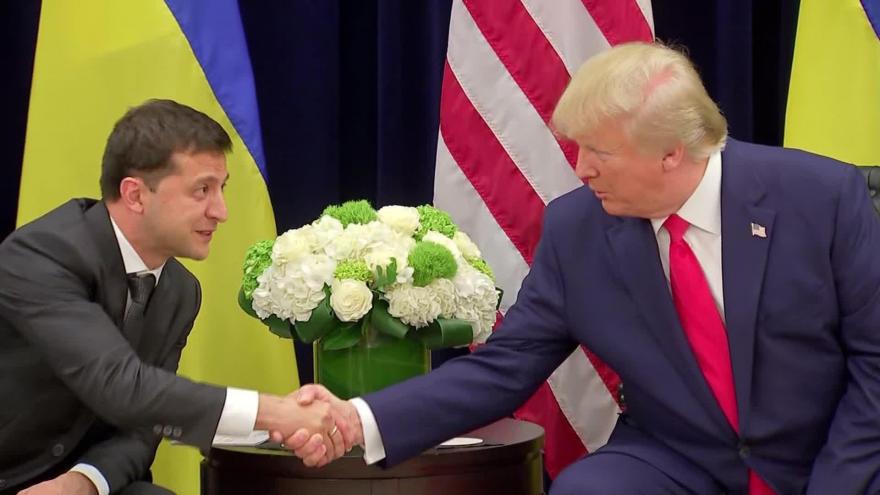 The Trump administration has informally notified Congress that it will soon announce the approval of an arms sale to Ukraine involving Javelin anti-tank missiles, a US official and congressional aide told CNN this week.

"I was on the phone call," Pompeo said Wednesday during a news conference in Rome with Italy's foreign minister, hours before the State Department's inspector general's "urgent" private briefing he requested with senior congressional staff members about documents related to the Ukraine scandal.

The phone call was part of a whistleblower's complaint that alleged Trump sought "to solicit interference" from Ukraine in the upcoming 2020 election, and that the White House took steps to cover it up. Trump has denied doing anything improper.

Pompeo's remarks on Wednesday was the first time the top US diplomat confirmed that he was on the July call between Trump and Zelensky — after previously evading questions on what he knew about the conversation and news reports from Monday that revealed he was on the call.

During the news conference Wednesday, Pompeo was asked if he heard anything on the call that gave him any concerns or raised a red flag, but he dodged the question.

"The phone call was in the context of -- now I guess I've been secretary of state for coming on a year and a half. I know precisely what the American policy is with respect to Ukraine. It's been remarkably consistent, and we will continue to try to drive those set of outcomes," Pompeo told reporters.

"It's what our team, including Ambassador (Kurt) Volker, were focused on was taking down the threat that Russia poses there in Ukraine. It was about helping the Ukrainians to get graft out and corruption outside of their government and to help now this new government in the Ukraine build a successful thriving economy. It's what the State Department officials that I've had the privilege to lead have been engaged in. And it's what we will continue to do. Even while all this noise is going on."

The Wall Street Journal first reported -- and CNN confirmed -- that Pompeo was on the call with Trump and Zelensky, where Trump asked Zelensky for a "favor" -- investigate Biden, a 2020 candidate for the Democratic nomination, and his son, Hunter Biden. There has been no evidence of wrongdoing by the Bidens.

Pompeo was asked about the whistleblower complaint last week while in New York for the United Nations General Assembly, but he said at the time he had not yet read it in full.

He gave a similar answer to ABC News during a September 22 interview, where he was asked what he knew about the conversation.

"You just gave me a report about a (intelligence community) whistleblower complaint, none of which I've seen," Pompeo told ABC News at the time.

Late last week, Pompeo was subpoenaed by the chairmen of the House Intelligence, Foreign Affairs and Oversight committees over his failure to produce documents related to Ukraine.

In addition to the subpoena, the chairmen informed Pompeo in a separate letter that they had scheduled depositions for five State Department officials who have been mentioned in relation to the inquiry. Pompeo had responded Tuesday that the proposed timetable for witnesses to testify in the coming days was too compressed, and Democrats warned Pompeo that any effort to prevent those officials from speaking to Congress "is illegal and will constitute evidence of obstruction of the impeachment inquiry."

In Rome Wednesday, Pompeo said he objected to the demands that "deeply violate fundamental principles of separation of powers," saying that the House Democrats had directly contacted the five officials and told them not to contact legal counsel at the State Department.

"We will, of course, do our constitutional duty to cooperate with this co-equal branch," Pompeo said. "But we are going to do so in a way that is consistent with the fundamental values of the American system. And we won't tolerate folks on Capitol Hill bullying, intimidating State Department employees. That's unacceptable, and it's not something that I'm going to permit to happen."