Poll: Two-thirds of Americans say life is at least somewhat back to pre-pandemic normal 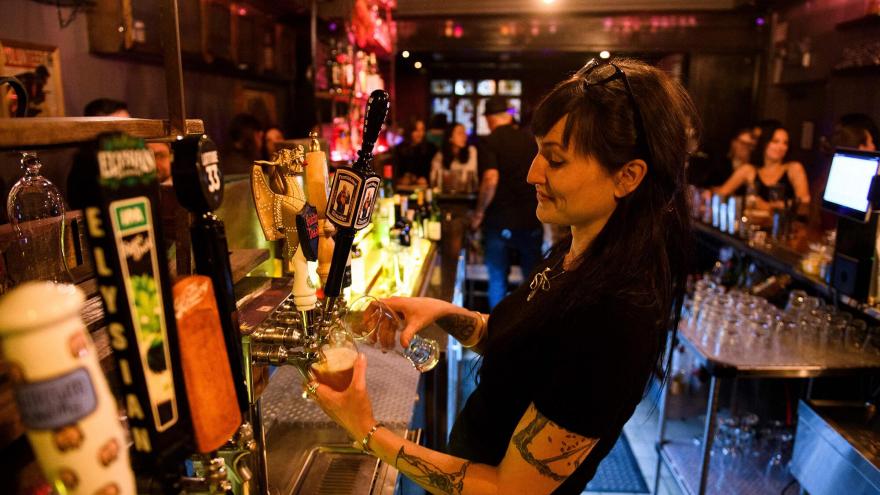 Two-thirds of US adults now say their lives are at least somewhat back to normalcy, according to a new Gallup survey. Pictured a bartender pours beers in California on May 21.

(CNN) -- Two-thirds of US adults now say their lives are at least somewhat back to normalcy, according to a new Gallup survey, reflecting a major shift in sentiments since last fall. Americans are more optimistic and less worried about coronavirus than at any point previously in the course of the pandemic, although disruptions due to the virus -- and partisan divides over its impact -- persist.

There are few notable demographic divides on whether things are edging back toward normalcy, according to Gallup, with similar results across gender, age, regional and financial lines. There are, however, clear partisan differences. Last fall, Republicans were 46 percentage points likelier than Democrats to say things were at least somewhat back to normal. That gap has narrowed with Democrats' improving outlook, but Republicans are still 20 percentage points more likely than Democrats to say things are at least somewhat normal.

An 84% majority of Americans say the coronavirus situation in the US is getting at least a little better, a new high. The share saying they're even somewhat worried about contracting coronavirus themselves has dropped to a low of 20%. And, for the first time in Gallup's polling since the start of the pandemic, Americans favor advising healthy people to "lead their normal lives as much as possible," rather than "stay home as much as possible to avoid contracting or spreading the coronavirus."

Most Americans say they're still affected by the pandemic in some ways, but its repercussions are no longer felt as universally as they once were. About half, 52% say their life continues to be disrupted in at least some ways by the pandemic, down from a high of 81% who said the same last spring. And while 57% think disruptions from the coronavirus will continue through the end of the year, that's dropped 10 percentage points in only the last month.

The data on the public's increasing optimism comes amid similarly encouraging numbers on the trend of the pandemic itself. The US recorded a seven-day average of fewer than 20,000 new daily Covid-19 cases this week for the first time since March 2020. A 63% majority of adults in the country have received at least one dose of a Covid-19 vaccine.

A 78% majority of Americans say they're satisfied with the vaccine rollout. Fewer agree that the government has communicated a clear plan of action on coronavirus: Just 35% say the Centers for Disease Control and Prevention has done so, with 45% saying the same of their state's governor, and 48% of President Biden

Gallup used a nationally representative online panel to survey 3,572 US adults between May 18-23, with an error margin of plus or minus 3 percentage points.