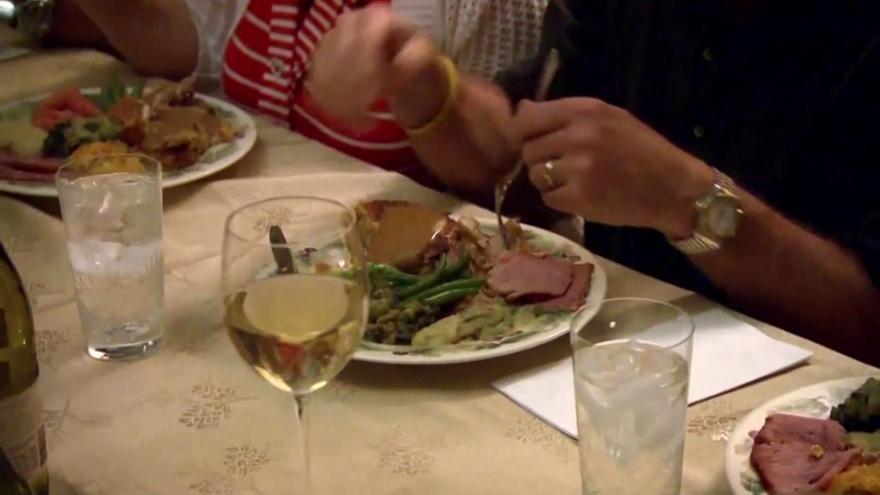 WASHINGTON (AP) — Bring on the turkey — but maybe hold the politics.

Thanksgiving is Glenn Rogers' favorite holiday when people gather around the table and talk about things to celebrate from the past year. But Donald Trump's presidency isn't something everyone in the Rogers family is toasting.

"For the most part, we get to the point where we know that we're not going to agree with each other and it gets dropped," says the 67-year-old manufacturing consultant, who says he voted less for Trump than against Democrat Hillary Clinton.

Rogers is among more than a third of Americans who say they dread the prospect of politics coming up over Thanksgiving, compared with just 2 in 10 who say they're eager to talk politics, according to a new poll by the Associated Press-NORC Center for Public Affairs Research. Four in 10 don't feel strongly either way.

Those who do think there's at least some possibility of politics coming up are somewhat more likely to feel optimistic about it than Americans as a whole. Among this group, 30 percent say they'd be eager to talk politics and 34 percent would dread it.

The debate over whether to talk politics at Thanksgiving — or not — is about as American as the traditional feast itself. By Christmas 2016, 39 percent of U.S. adults said their families avoided conversations about politics, according to the Pew Research Center.

But Americans are still trying to figure out how to talk about the subject in the age of Trump, and amid the sexual misconduct allegations that have ignited a new debate over standards for conduct between men and women. The conversation, some analysts and respondents say, touches on identity among people who group themselves by other factors, such as family, friendship or geography.

Ten months into Trump's difficult presidency, he remains a historically unpopular president and a deeply polarizing force in the United States. His drives to crack down on immigration in the name of national security and the economy cut right to the question of who is an American. And his defense on Tuesday of Republican U.S. Senate candidate Roy Moore, the former Alabama judge accused by six women of pursuing romantic relationships with them when they were teenagers and he was in his 30s, comes amid a wider deluge of sexual misconduct scandals. Those engulfed include an array of politicians and policymakers — past, present, aspiring and presidential — of all partisan stripes.

For any mention of Moore, who denies the accusations against him, there's Democratic Sen. Al Franken of Minnesota, who has apologized or said he feels bad about the allegations against him. For every mention of the "Access Hollywood" tape in which Trump could be heard bragging about touching women without their consent, there are allegations that Democratic President Bill Clinton assaulted women. Both men deny the accusations.

Trump won the 2016 election, even though more than a dozen women accused him of sexual misconduct, and roughly half of all voters said they were bothered by his treatment of women, according to exit polls. Trump called the allegations false and said he would sue the women, but that hasn't happened.

Then there's the broader national conversation about what to do with the art, public policy work and legacies of public figures accused of sexual harassment or assault.

In the past, the Emily Post Institute Inc. received Thanksgiving etiquette questions that were typically about how to handle difficult relatives, says author Daniel Post Senning.

"Now, I am hearing questions like, 'I don't want to go,' or 'I can't imagine sitting at a table with someone who has this perspective and staying through the meal,'" he says. "My impression is that it's still out there. ... The shock of that election is a little further in the rearview mirror, but I think people still have strong feelings about it."

Fort Worth, Texas, resident Greg McCulley saw that firsthand last year. He recalls that of a dozen adults gathered around the Thanksgiving table, all but one was celebrating Trump's election. That was his sister-in-law, who fumed about Trump and the "Access Hollywood" tape. Tension seethed.

"It was like, you say Donald Trump was bad, then someone says Bill Clinton was bad, so that extended to Hillary Clinton," says McCulley, 43, an Air Force retiree who voted for Trump but doesn't dispute that Trump's recorded remarks were troubling. He does expect politics to come up this year, probably about sexual assault.

"The conservatives have more of a bigger bone. They'll say look at Al Franken," says McCully, who nonetheless looks forward to the conversation. "But it may be that my sister-in-law keeps her mouth zipped and says, 'I don't want to wade into those waters again like last year.'"

The AP-NORC poll of 1,070 adults was conducted Nov. 15-19 using a sample drawn from NORC's probability-based AmeriSpeak panel, which is designed to be representative of the U.S. population. The margin of sampling error for all respondents is plus or minus 4.2 percentage points.