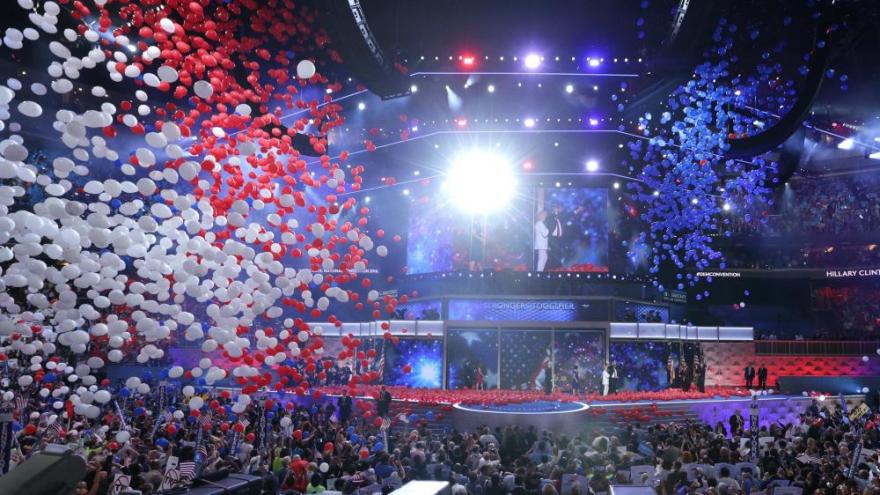 Democratic presidential candidate Hillary Clinton and vice presidential nominee Tim Kaine stand with their families at the end of the fourth day of the Democratic National Convention at the Wells Fargo Center in Philadelphia.

(CNN) -- Democrats and Republicans might as well be planning their coronavirus-impacted conventions in entirely different universes.

Whereas Democrats are moving forward with a cautious approach -- setting their convention back by a month and openly acknowledging that this year's event may need to be virtual -- Republicans are insisting that the pandemic has not changed their plans and are bluntly ruling out the possibility of a virtual event.

The dramatic differences highlight the political divides that have cleaved open around coronavirus, and mimic what is happening nationally as states controlled by Democrats and Republicans take different approaches to reopening.

Republicans, led by Republican National Committee Chairwoman Ronna McDaniel, have outright denied that any alternatives are being considered for their August convention in Charlotte, North Carolina, claiming the planning is "full steam ahead."

McDaniel told reporters this week that the party "will not be holding a virtual convention."

"I have not heard any concerns yet from our delegates, our state party chairs or national committee members about concerns," McDaniel said. She noted that the party has hired a senior adviser for health and safety planning to help prepare for the convention.

Democrats, on the other hand, have started to remake their convention plans, moving the four-day event, originally set for July, to August and openly acknowledging that possible wholesale changes could be coming.

"We're not going to put our public health head in the sand, but we're optimistic we can do so because we put it off for five weeks," Democratic National Committee Chair Tom Perez said this month.

The committee's powerful Rules and Bylaws Committee even approved plans this month that allow convention planners to seek alternate voting methods ahead of the gathering, including virtual voting.

Former Vice President Joe Biden, the party's presumptive nominee, has floated the idea of holding the convention virtually for the first time in history, and the Democrats' host committee in Milwaukee cut more than half of its staff.

Joe Solmonese, CEO of the Democratic convention, told CNN he has "for a while now felt like this convention planning narrative that you're hearing from both parties is aligning very much with the narrative of the election cycle."

"I think that most people seem to think we have two choices: Either everybody's coming or nobody's coming, and there's a moment in time where we have to flip the switch one way or the other," Solmonese said. "And the fact of the matter is that we're going to fall somewhere along that spectrum."

Conventions are as much the venue to nominate the party's standard bearer as they are a multi-day fundraising bonanza for each party. They are also media-driven events, with each party hoping the days of coverage will provide its candidate with a boost as the election cycle reaches its final months.

But there is so much uncertainty around coronavirus that the only thing clear about this year's conventions is that they will be unlike any in recent history.

"They're planning on having it, getting everything in place, but depending on Covid it may just not happen," said former Virginia Gov. Terry McAuliffe, who ran the Democratic convention in 2000.

McAuliffe told CNN that a decision would have to be made by late June about whether to hold an in-person convention, with another option being a "scaled-down" event.

"Plenty of contingency plans are being made today," McAuliffe said.

Republicans, on the other hand, have been resistant to any changes, even as the pandemic was only beginning to unfold. President Donald Trump said in March that there was "no way" he was going to cancel the convention.

Another reason for the optimism, according to a Republican source with knowledge of the plans, is that it is far harder to raise the money needed to host a virtual convention, so any acknowledgment that the event will not be in person directly impacts the money coming in to host the event. The source said Republicans have until late June or early July to make a final decision on whether the convention should go forward as planned.

If the conventions move to an entirely virtual space, gone will be the arenas full of people and balloons dropping once the nominee is announced. Conventions build toward the nominee's speech in front of thousands of supporters, and many politicians draw energy from the crowd. Convention speeches also have been launching pads for future party leaders, like then-Sen. Barack Obama's speech at the 2004 Democratic convention, which helped propel him onto the national stage.

"It's a little bit like rock and roll -- performers get energy from the crowd," said Julian Zelizer, a professor of history and public affairs at Princeton University. "If Obama did that as a Zoom call, it wouldn't have been quite so dramatic."

Holding a convention virtually would save a lot of money, both public and private, at a time when the jobless rate is at its highest since the Great Depression. In the middle of a pandemic that has caused widespread economic hardship, companies may also not be as willing to sponsor conventions that have run more than $100 million each.

"Companies are struggling to figure out how they're going to pay their own bills. Why would you pony up hundreds of thousands of dollars for this party for politicians?" said Eric Heberlig, a professor of political science at the University of North Carolina at Charlotte.

Heberlig said a smarter move for businesses, from a public relations standpoint, would be to donate to relief efforts for the pandemic that has killed more than 90,000 in the United States.

American Airlines, which reportedly donated $1 million to the Democratic convention in 2016, said it is not donating to either convention this year. The Wall Street Journal reported several companies that cut large checks in 2016 are not donating now. Facebook, which sponsored both conventions in 2016, and Microsoft, which provided technology products and services to the RNC and sponsored some host committee activities for the DNC, declined to comment to CNN on whether they were donating again this year.

In addition to donations from corporations and individuals, tens of millions of taxpayer dollars are needed to stage conventions that draw delegates from every state to formally nominate the party's presidential nominee. But when the federal government is being called on to rescue businesses and help millions of newly unemployed Americans, many see taxpayer spending on a several-day political extravaganza as unwise.

The Charlotte City Council narrowly voted at the end of April to approve the $50 million grant from the Department of Justice to cover law enforcement, emergency medical services and other costs for the convention, according to The Charlotte Observer.

Tariq Bokhari, a Republican member of the City Council, told CNN that he feels everything about the convention is up for discussion.

"There are conversations of people brainstorming and throwing concepts on the wall ... essentially building a tool kit or a playbook of what plays to call depending on where the next four months goes," Bokhari said.

The Republican city leader said businesses have been hit hard by the fallout of the pandemic, and canceling or scaling back the convention would be a second hit that could harm hotels, restaurants, car rentals and other businesses already reeling.

"Knocking out over a hundred million dollars of economic impact that's going to come in, I mean, that's something that the data needs to absolutely imperatively tell us that we should not do, cannot do, before we just say, 'Yup, better safe than sorry. Let's just cancel it and we'll do it again the next time.' "

In Milwaukee, Cavalier Johnson, the president of the city council, agreed that the August convention would be a sorely needed "economic shot in the arm."

But he said lives are at stake, so they are waiting to learn more and receive public health guidance related to Covid-19 transmissions.

"The only for certain thing," said Johnson, "is that the way we should approach it is with a public health lens first."