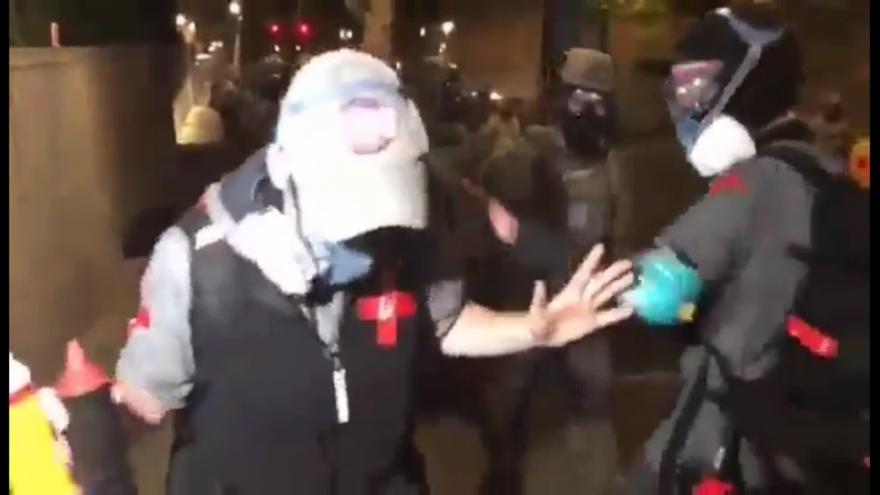 A viral video showing a volunteer medic being shoved to the ground by law enforcement officers in Portland is raising new questions about the tactics being used by authorities to handle ongoing protests in the city.

(CNN) -- A viral video showing volunteer medics being shoved to the ground by law enforcement officers in Portland is raising questions about the tactics being used by authorities to handle ongoing protests in the city.

The ACLU has filed a lawsuit on behalf of several volunteer medics who say they were involved in a physical encounter with authorities as the medics attempted to treat an injured person.

CNN interviewed two of the plaintiffs, Christopher Durkee and Savannah Guest, on Tuesday night near the downtown Portland federal building, which has served as the epicenter for ongoing protests for over 55 days.

Durkee, a trained EMT and mental-health professional, and Guest, a former emergency medical services volunteer, said they came to Portland from outside the area in order to help treat protesters who are periodically injured during routine clashes between demonstrators and law enforcement officers.

They described an incident from early July 12, which was caught on video and posted to social media. In the video, the two medics with red crosses on their clothing appear to be treating an injured man on the ground while a line of law enforcement officers approach them.

Durkee said he and Guest were called by protesters to help treat the man, and, as officers attempting to clear the area of demonstrators came towards them, the two volunteer medics signaled they intended to stay and treat the man laying on a sidewalk.

In the viral video, which has sparked widespread outrage in Portland and on social media, the pair of volunteer medics are seen walking backwards as one tactical officer in camouflage directs them to retreat. Another officer is then seen rushing in from the side and shoves one of the medics to the ground.

One officer begins swinging a baton into the air around the medics and then repeatedly slams the baton on the cement.

"As officers approached, we began backing up as they were commanding us to do," Durkee told CNN, adding that he was then pushed to the ground by law enforcement. "My partner also fell to the ground and my partner was hit with a baton repeatedly."

The volunteer medics said tear gas was then deployed by officers in the area where the man on the ground was laying, dispersing the group of protesters who had gathered.

In a statement to CNN, a spokesman for the US Marshals said, in part, "We can confirm that the uniformed personnel in the video were clearly marked as POLICE U.S. Marshals. He added, "US Marshals engage in crowd control only when necessary to protect the functioning and security of the federal courthouse."

The statement indicated the agents in the video were engaged in clearing the area of violent protesters and others after the local police had declared a riot in the area and requested federal assistance. A medically trained deputy US Marshal stayed with the man seen on the ground, who was later determined not to be injured, according to the statement.

The spokesman said responding agents gave verbal and physical instructions to the people in the area to clear out, adding, "Sometimes physical pressure is used by law enforcement officers when necessary to safely ensure compliance to the lawful orders."

CNN has also reached out to the Department of Homeland Security and the Portland Police Bureau for comment.

Since the death of George Floyd at the hands of Minneapolis police officers, demonstrators have gathered in Portland seeking accountability for law enforcement officers they believe have acted with impunity and used excessive force.

Ahead of the July Fourth weekend, the Trump administration dispatched teams of federal agents to the city as part of an effort to guard federal monuments. The President says federal resources were sent to protect the downtown federal building -- which has periodically been targeted by rioters setting fire and launching fireworks at the building -- but some protesters say it is the large increase in federal forces that continues to fuel their anger.

While protests during the daylight hours have been overwhelmingly peaceful -- marked by marches, unity gatherings, and even the singing of songs -- clashes at night between some protesters and federal officers have resulted in the repeated vandalism of the US courthouse in downtown Portland and the tear gassing of demonstrators.

In one incident earlier this month at the courthouse, police say a person was arrested after assaulting a federal agent with a hammer.

The video showing the medics shoved by officers is not the only recent encounter to generate widespread controversy and allegations of excessive use of force by law enforcement.

On Saturday night, 53-year-old Navy veteran Chris Davis told CNN he was beaten by a federal agent with a baton outside the court house and sprayed with pepper spray at close range. His account appears to match video of the incident.

When contacted by CNN, a spokesperson for the Portland Police Bureau said that their officers were no involved in the incident.

Customs and Border Protection also told CNN that their officers were not involved. CNN has reached out to the Department of Homeland Security and US Marshals for a comment but did not get a response.

In another video that sparked national outrage from activists and government officials, two federal officers in camouflage tactical uniforms approached and detained a man, placed him inside an unmarked van and drove away. After refusing for hours to respond to CNN's requests for comment on the incident, US Customs and Border Protection eventually released a statement identifying the officers as belonging to that agency, and indicated the man was wanted for questioning regarding a possible crime. However, a DHS official said he was later released.

On Thursday, the US Justice Department's independent watchdog agency said it will investigate the use of force by federal law enforcement officers in Portland, Oregon, and Washington, DC, where violent crackdowns on demonstrators have punctuated a summer that's been rocked by protests against police brutality.

This week's ACLU lawsuit, which alleges local and federal officers violated the Constitutional rights of four individuals, asks for "monetary damages and prospective injunctive relief" so that the volunteer medics "can continue their efforts to aid protesters," the complaint says.

"Targeting protest medics limits their ability to support protesters with medical care," the complaint says. The ACLU argues that the four medics "wish to continue treating protester injuries and doing their part to create a safer protest environment."

"As long as people need help we'll be here," Guest told CNN. "That's just kind of the role that we've accepted as medics, and that a lot of people as medics have accepted, regardless of whether or not we're brutalized."