Police were called to a California home. They found a mountain lion trapped in the bathroom. 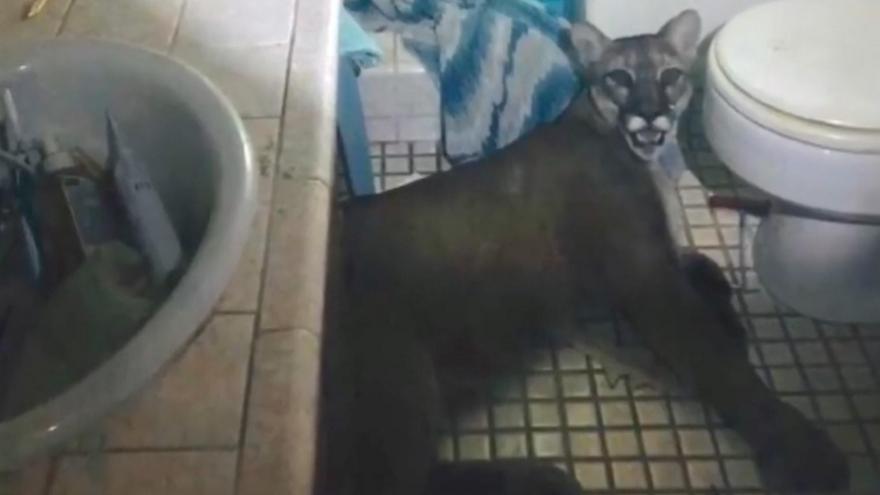 This mountain lion made its way into a California home and somehow locked itself in the bathroom.

(CNN) -- A California couple watching TV at home Sunday evening got an unwelcome visitor: a mountain lion that wandered in through their open door.

Edward and Kathy Sudduth of Sonora heard a loud slam and were soon met by the big cat, which they think must have been chasing a neighbor's pet. It took them a moment to register what was going on, the pair told CNN affiliate KTXL.

"His tail was pretty close to me so I just 'thwipped' it a little," said Edward Sudduth, 84.

That touch and the couple's noises sent the animal running into the bathroom, where it became locked inside.

Sudduth and his wife, 87, barricaded themselves safely into another room, then called 911 for help to get the unwanted visitor out of their home.

"911 had a hard time understanding what I was talking about because I probably was jabbering a lot," Sudduth said.

The Department of Fish and Wildlife and Tuolumne County Sheriff's deputies broke the bathroom window and coaxed the mountain lion to leap out of the window.

"He did get a stern warning about the break-in before being released," the Tuolumne County Sheriff's Office joked on Facebook.

Mountain lions are not considered a threat to humans unless they're exhibiting aggressive behavior. A person is 1,000 times more likely to be struck by lightning than attacked by a mountain lion, according to the California Department of Fish and Wildlife.

No one has seen the mountain lion since it jumped out of the window. A neighbor claims to have heard it, and was worried about her own cat's safety.

One thing is for sure: The couple "won't be leaving the door open anymore," Sudduth said.