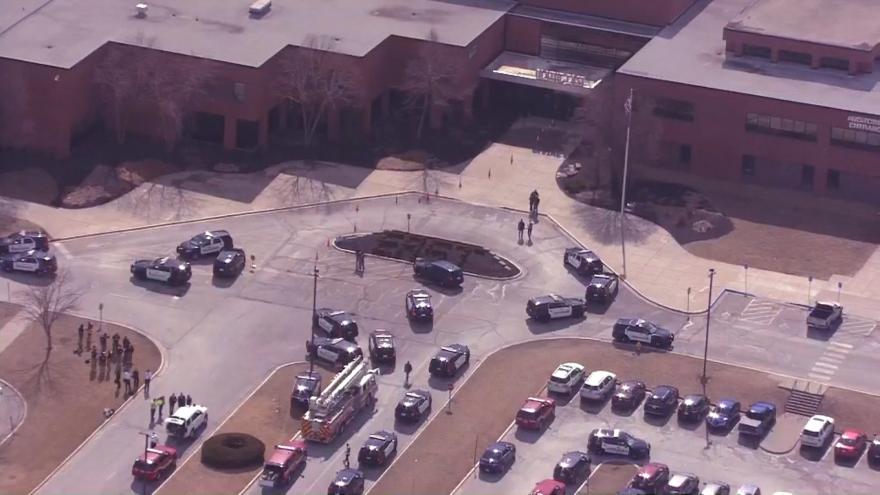 (CNN) -- A Kansas high school principal and school resource officer were shot at Olathe East High School in Kansas Friday, and Olathe Police say a student was the shooter.

The school resource officer returned fire, wounding the suspect, who is expected to survive, according to Olathe Police Department spokesman Sgt. Joel Yeldell.

It was Yeldell's understanding, he said, the suspected shooter attended Olathe East High. He had no other information on the suspect, he said, adding "We have no students injured at this time other than the suspect."

The officer, the principal, and the student were taken to the hospital for treatment. Two have been released, though it was unclear Friday evening which patient remained hospitalized. "Two victims have been discharged from the hospital," said Christine Hamele with Overland Park Regional Medical Center. "One adult male victim remains in critical condition."

There is no longer an active threat, Yeldell told reporters.

"If your loved one was injured, you would have already been contacted by the police department," the school district tweeted.

Information was thin Friday, but it appears school administration "contacted" the student in the school's office area before the student shot the administrator, Yeldell said. Police received a report of shots fired around 10:30 a.m. (11:30 a.m. ET).

"I did hear just shortly before we started that our officer is fine. He's talking to people at the hospital," Yeldell said. "Our administrator is also in stable condition and, I believe, expected to survive, as well as the suspect that's in custody."

Authorities will release more details on the victims later, he said.

Yeldell had no more information about what led to the shooting, what sort of firearm was used or how many shots were fired, he said.

"We had an SRO, it sounds like, that did his job, so that's great news and the injuries are expected to be survivable," Yeldell said.

The sergeant asked parents to remain patient during the reunification process.

Pupils who walk or ride to school with their parents can be picked up at California Trail Middle School. Students who ride the bus and special education students can take their buses home, and students with their own cars "will be released in a staggered fashion and escorted to their vehicles," according to the school district.

"Our thoughts are with the entire Olathe East High School community today," Kelly said in a tweet.

Hours after the incident, the Olathe Police Department tweeted investigators are aware of a video circulating on social media showing someone with a rifle "gaining access to the school." The person in the video is a responding Olathe police officer, the tweet said.

The incident marks the 12th shooting at an American campus with K-12 students in 2022, according to a CNN tally.

Olathe East High, which has roughly 2,000 students, is located about a 30-minute drive southwest of Kansas City.