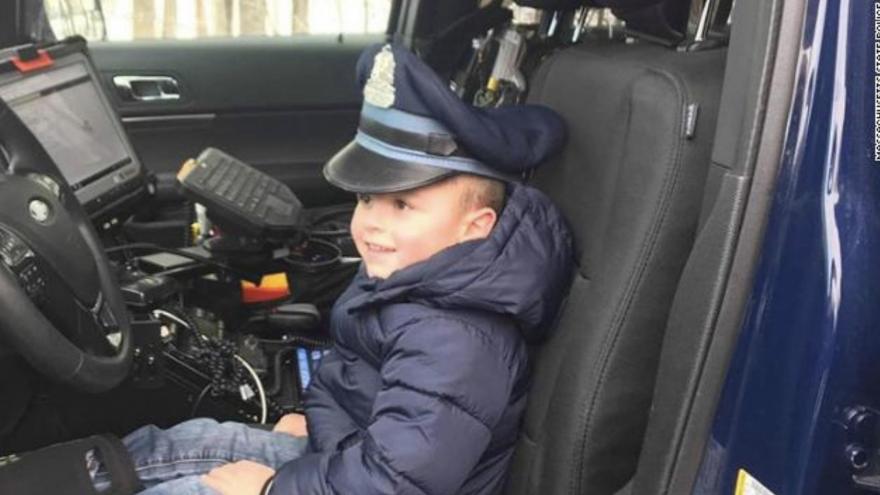 Jaiden "JJ" Clifford's mother was stabbed to death in November 2019. Her killer was caught a week later. Leominster Police Officer Dan Cantois wasn't content to let JJ's Christmas be blue. Officers from 10 police departments around the state came to visit and surprise Jaiden with gifts.

(CNN) -- For many 4-year-olds, the holiday season means trips to see Santa, gifts under the Christmas tree and fun with family members.

But for one little boy in Leominster, Massachusetts, this year is going to feel a bit different.

In November, Jaiden "JJ" Clifford's mother was stabbed to death. Her killer was caught a week later.

He learned that JJ liked police and their cars and hats. And as President of the Leominster Police Association, Cantois reached out to neighboring police departments to help brighten JJ's holiday.

"That's the thing with the smaller police departments out here," he told CNN. "You make a phone call and we're all pretty interested and excited to help out."

And that's just what happened.

Officers from 10 police departments around the state, plus Massachusetts State Police, answered that call, and the departments decided to surprise JJ outside his grandparents' home.

"I spoke to the grandmother, so JJ kind of had an idea that we were coming, but I think they were just expecting a few cruisers," he told CNN. "I don't think they were expecting 20 cruisers to pull up on their street."

Some departments threw in gifts for JJ: Vincent Pusateri II, the city solicitor for Fitchburg, donated a bicycle, according to Fitchburg Police Department's Facebook page. Leominster Walmart donated toys, too.

"We only had maybe a week of preparation, but every agency we called in the area was very excited to send someone down and try to make JJ smile," Cantois said.

JJ, who is now being raised by his grandparents, couldn't stop beaming.

An overwhelmed JJ got it in police cruisers, put on their hats and receive lots of gifts from his new friends.

"We were there for about an hour, and he had a smile on his face the whole time," Cantois said. "That was the best part."

Christmas will feel different for JJ and his family without his mother, but the Massachusetts officers wanted the family to know one thing -- "We're here for you."

"We just wanted to brighten his day, put a smile on his face and help out the family," Cantois said.