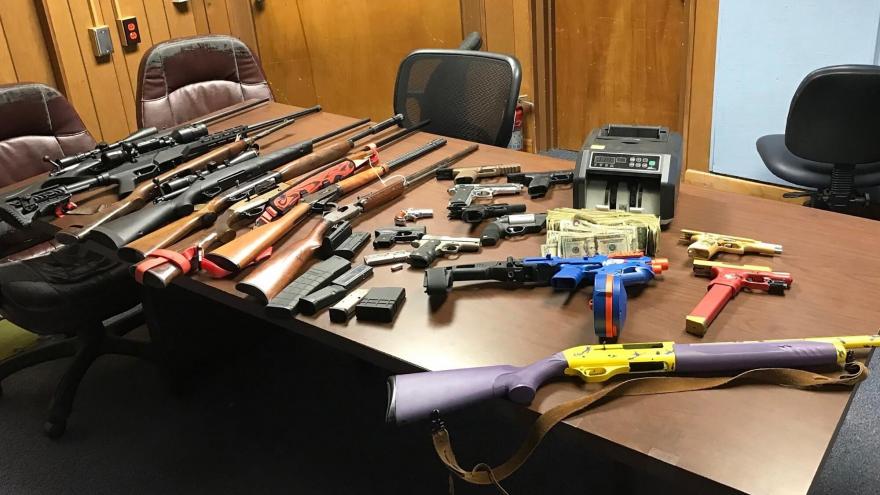 (CNN) -- Police in North Carolina found a real gun disguised as a Nerf toy while conducting a drug raid in Catawba County, north of Charlotte, this week.

The Glock 19 pistol, along with a 50-round drum magazine, had been painted blue and orange and labeled with the Nerf logo to look like a toy, the Catawba County Sheriff's Office said in a news release on Facebook.

The firearm was among 20 guns -- pistols, rifles and shotguns -- that investigators found during the home search Wednesday, along with cocaine, psilocybin mushrooms and marijuana. Police also seized about $2,300 in cash.

"Firearms of this type, while not illegal to possess, are concerning to law enforcement," the release said. "Firearms, in general, are commonly seized in conjunction with searches where felony amounts of narcotics are present."

CNN is trying to reach him or an attorney representing him for comment.

Catawba County Sheriff's spokesman Capt. Aaron Turk said Burch was released on a $20,000 unsecured bond on Wednesday. Burch was formally advised of the charges against him at a first appearance in Catawba County District Court on Thursday.

Turk said he did not know when Burch's next court date is or if he is represented by an attorney. He said investigators do not have a motive for why the gun was made to look like a Nerf toy.