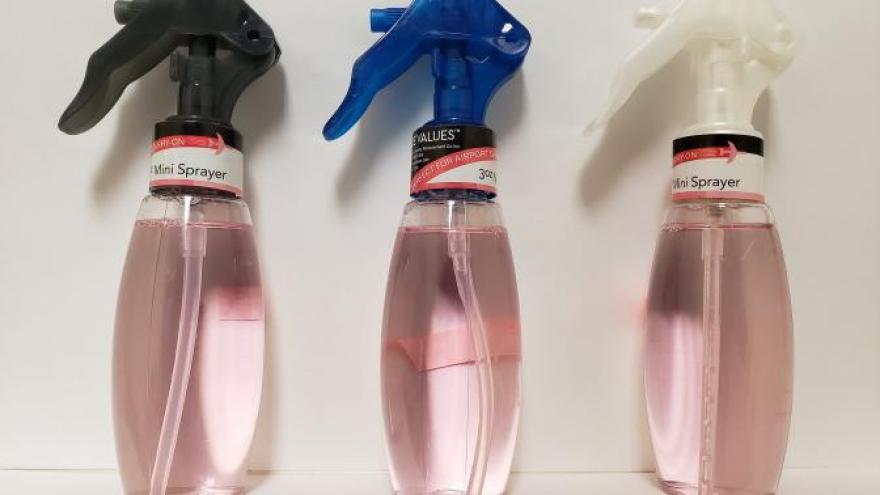 The sprays, shown here, have now been pulled from shelves at the 7-Eleven location.

(CNN) -- If you've purchased hand sanitizer without a recognizable label in recent days, watch out.

The owner of a New Jersey 7-Eleven store has been charged with endangering the welfare of a child and deceptive business practices, after New Jersey police responded to the store on Monday night after reports that four young boys had been burned by an item sold there as "Spray Sanitizer."

Officers with the River Vale Police Department paid the store a visit after photos posted to social media showed chemical burns to the boys' arms and legs, according to a statement posted to the department's Facebook page. Police seized the remaining bottles, the statement read.

The owner of the store had mixed commercially available foaming sanitizer not meant for resale with water and packaged it to be sold at the store, according to a statement from the New Jersey attorney general's office. Fourteen bottles of the mixture were sold at the store, and five were turned over to the police department. Currently, nine bottles are unaccounted for, the statement read.

"While further investigation is underway, our first priority is to make the public aware that they should not use this item if they purchased it at the River Vale 7-Eleven," Lt. John DeVoe said in a statement.

CNN reached out to the River Vale 7-Eleven store, but multiple calls to the business went unanswered.

The Division of Consumer Affairs has opened an investigation into the store's practices regarding the sale of health and sanitation products, the statement said.

"Let me be perfectly clear: if you try to take advantage of our residents during a public health emergency, we will hold you accountable," said Attorney General Gurbir S. Grewal in a statement. "Retailers who try to make a quick buck by exploiting others will face civil and criminal consequences."

The River Vale 7-Eleven location is owned by a 7-Eleven franchisee. According to a statement to CNN from 7-Eleven Inc., franchisees operate with independent business owners and "are obligated to comply with all federal, state and local laws related to the operations of their stores."

"The safety and well-being of 7-Eleven customers is of utmost importance and our hearts are with this young man at this time," the statement read. "We understand the severity of this situation and are cooperating with local law enforcement. We are reviewing this matter internally and will take appropriate action."

Photos of the sanitizer showed no discernible label, suggesting it may have been homemade in the face of widespread hand sanitizer shortages due to the spread of the novel coronavirus.

In neighboring New York, Gov. Andrew Cuomo announced the state will be producing its own hand sanitizer as a result of widespread shortages caused by the novel coronavirus.

Others have gone the DIY route, making their own hand sanitizing products despite wariness from experts.

More than 4,000 people around the world have died from the virus

In the United States alone, there have been hundreds of cases of the novel coronavirus and 29 deaths. More than 113,000 people are infected around the world, and more than 4,000 have died.

The Centers for Disease Control and Prevention have said washing hands is the best prevention against the virus, along with keeping mouths covered when sneezing or coughing and refraining from touching your face.

Products such as hand sanitizer can be good substitutes for washing hands. Wiping surfaces down with disinfecting wipes such as Lysol can also help prevent the spread of the virus.