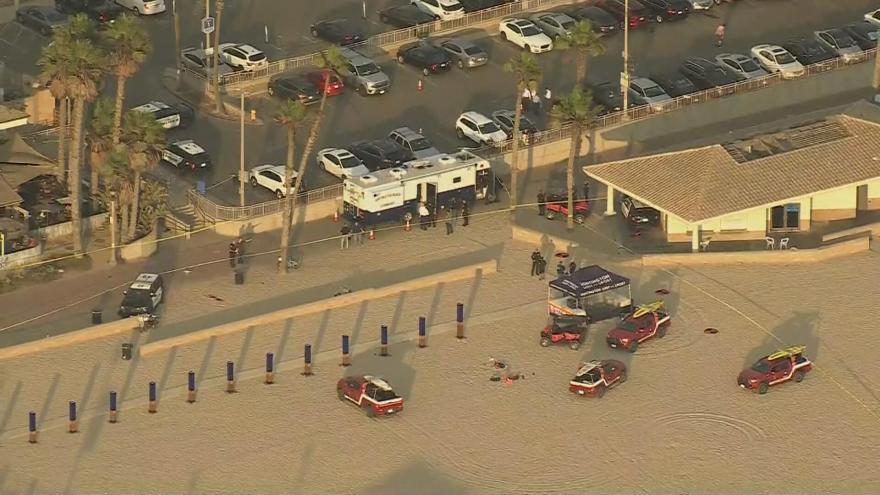 The scene of an officer-involved shooting in Huntington Beach, California.

Police received a call at approximately 3:15 p.m. about "a suspicious man with a gun," according to a news release from the department.

Officers arrived to find the man in the sand, south of the pier, HBPD said, near where the six-day surfing competition was taking place.

The man was "non-compliant to the multiple commands given and an officer involved shooting occurred," the release said.

"Obviously, heard the shots and everyone dropped to the ground," Brittany Turner, who was dining nearby, told CNN affiliate KCAL/KCBS.

"Some people were running. Everyone was looking around, like, what's going on, was it fireworks, was it a gunshots? Like, no one really knew."

"Then there were people on the ground, which made more people drop to the ground. So, it's kind of an intense situation," Turner said.

Police rendered lifesaving measures at the scene and the man was transported to an area hospital where he died, according to HBPD.

The Orange County Sheriff's Department later said on Twitter the coroner had identified "the decedent from the September 25 officer involved shooting in Huntington Beach as Ronnie Andrew Garcia, 43, unknown city of residence."

A gun was discovered at the shooting scene, police said.

Per department protocol, the Orange County Sheriff's Department will lead the officer-involved shooting investigation, according to HBPD.