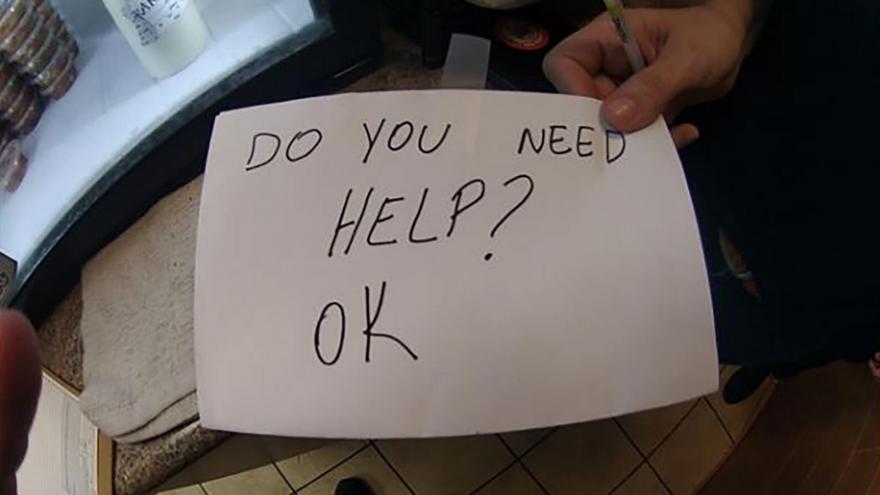 A waitress reached out to a boy with this note.

(CNN) -- An 11-year-old boy was removed from his home and his parents are in jail after police say an Orlando waitress noticed something was wrong and used a note to ask him if he needed help.

Flavaine Carvalho was not scheduled to work a shift at the Mrs. Potato restaurant on New Year's Day but someone called in sick, so she filled in, her boss Rafaela Cabede said during a press conference Thursday afternoon.

It had been busy the rest of the day since it was a holiday, but things had slowed down finally and that family was the last table of the night, she said.

"We truly believe that this was a holy provision, and we were very blessed that we were able to help this child," Cabede explained.

"Because of her, two children... were saved," Orlando Police Chief Orlando Rolon said at the press conference. "We probably would have been talking about a potential homicide investigation if she had not intervened when she did."

Carvalho said the boy was wearing a mask and hoodie as he sat at the table along with two adults and a young girl.

Although she couldn't see much, Carvalho said she noticed that he had a scratch in between in his eyebrows and that he did not order anything and wasn't eating, even though food had been brought to the table.

'You don't deny food for a kid'

Carvalho said she thought it was strange that the child wasn't eating and that he was quiet while the others were talking and playing.

She asked the table if their food and drinks were OK. When the one of the adults replied that the boy would eat his dinner at home, Carvalho said she began to think something else was going on.

"You don't deny food for a kid, especially in a restaurant," Carvalho said.

She then saw bruising on the side of the boy's face and arm and decided to see what she could do to help him.

"I just thought I need to do something," Carvalho explained. "I could not see him go away without any help."

Caravalho wrote a note asking the boy if he was OK and stood behind the parents where they couldn't see.

The boy nodded no. "I knew it -- that he is afraid or he is not comfortable saying that he needs help," Carvalho said.

So she decided to write another note.

This one said, "Do you need help?" Carvalho said the boy nodded yes and "made a movement with his hands showing he didn't know what to do."

Carvalho called her boss and then called 911.

In a 911 call, Carvalho tells dispatchers she's worried about the boy.

"One of the kids is with a lot of bruises on his arms and on his face and the parent is not giving food for him but is giving to the other kids that are with them," she said in the recording sent to CNN by the Orlando Police Department. "I'm super concerned and I don't know what to do. Can you give me some advice?"

Police arrived and questioned the child, who told detectives he had suffered abuse at the hands of his stepfather, identified by police as Timothy Lee Wilson II, Detective Erin Lawler with the Orlando Police special victims unit said during the press conference.

The boy told detectives he had been hit with a wooden broom, hung upside down from a door, and was regularly denied food as punishment, according to an Orlando Police Department news release.

Wilson was arrested at the restaurant, and the boy's mother, Kristen Swann, was taken into custody on January 6 after the boy made additional disclosures of alleged abuse, Lawler said.

The stepfather is charged with multiple counts of aggravated child abuse and neglect, court records show.

An Orlando Police Department press release said Swann admitted to detectives she knew about the abuse and failed to seek medical care for her son. She is charged with two counts of child neglect, court records show.

A 4-year-old child was removed from the home following the arrests of the parents and was found to not have suffered any abuse, according to Lawler.

'It shocks your soul'

Lawler said the boy is Swann's child and the 4-year-old is Swann's and Wilson's child.

After Carvalho called 911, the boy was taken to a hospital for his injuries, where he was found to be 20 pounds underweight for his age, according to Lawler.

Bruises across the boy's entire body in various stages of healing were also noted, Lawler said.

"What this child had gone through it was torture," Lawler said with tears in her eyes. "I'm a mother and seeing what that 11-year-old had to go through... It shocks your soul."

"If Ms. Carvalho would not have said something when she saw it that little boy would probably not be with us much longer," she added.

Lawler said the boy told investigators he had been abused on Christmas Day when the parents said Santa had suggested he be punished. The punishment included him being handcuffed to a furniture dolly, Lawler said, with his hands behind his back with rachet straps on his ankles and was made to set himself free. He was also hung upside down from his ankles in a doorway with ratchet straps, Lawler said.

The detective said the parents said they would punish him by making him do planks for 30 minutes and beat him when he couldn't do it.

Wilson and Swann were both booked in the Orange County Jail.

CNN has reached out to an attorney for Wilson but has not yet heard back. CNN has not been able to determine if Swann has legal representation.

They both remain at the Orange County Jail, Heidi Rodriguez, spokeswoman at the Orlando Police Department, told CNN in an email Thursday.