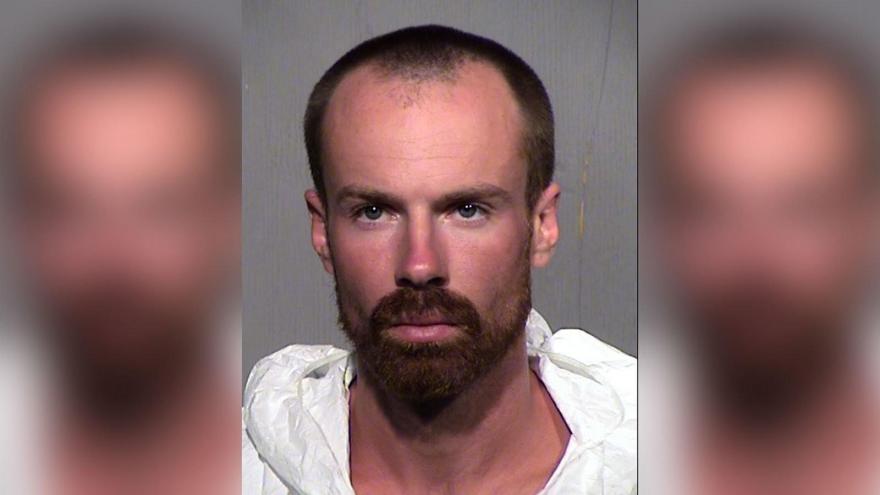 Michael Adams has been charged with first-degree premeditated murder.

(CNN) -- Police say a man accused of fatally stabbing a 17-year-old in the throat at an Arizona convenience store told them he felt threatened because the teen had been listening to rap music.

The incident occurred in Peoria, Arizona, near Phoenix, early Thursday.

Witnesses told police that the man, who's been identified as Michael Paul Adams, 27, walked up behind the teen, grabbed him and stabbed him in the neck, according to a probable cause statement obtained by CNN affiliate KPHO/KTVK.

Family members said the teen, Elijah Al-Amin, had gotten off of work about 11:30 p.m. on Wednesday and had spent some time with his girlfriend before stopping at the store.

Police said a witness was trying to help Al-Amin by applying pressure to his neck when they arrived at 1:42 a.m. Police and fire personnel provided medical care and he was taken to the hospital, where he was pronounced dead at 2:05 a.m.

The witnesses told police that Al-Amin hadn't done or said anything to provoke the attack. One said Adams didn't say anything to the teen before stabbing him.

Police stopped Adams as he walked away from the store. He had blood on his left forearm, hand and foot, and officers found a pocket knife on him. He was taken into custody without incident.

Adams had been released from prison July 2, according to the Arizona Department of Corrections.

Adams told a detective that he stabbed Al-Amin in the back and cut his throat, according to the statement.

He said Al-Amin didn't do anything threatening but that the youth had been listening to rap music in his car in the parking lot, according to the statement.

He told police that he felt threatened by the music, not by Al-Amin. Adams is white, and Al-Amin was black, white and Latino.

"Adams felt he needed to be 'Proactive rather than reactive' and protect himself and the community from the victim," the documents said.

Adams has been charged with first-degree premeditated murder and is being held at the Maricopa County Jail in lieu of $1 million bail.

Jacie Cotterell, who represented Adams at an initial court appearance but is no longer his attorney, said Adams has a history of mental illness, according to KPHO/KTVK.

No public defender has been appointed.

'He loved music and working'

Al-Amin's mother told CNN she didn't understand how anyone could think he was a threat.

"My son is so special and so loved and everyone loved him," Serina Rides said. "He's so compassionate and caring, so caring about everyone."

She said he was going to be a senior in high school and was turning 18 on July 28.

He worked at Subway and Taco Bell and was hoping to get a third job.

"My son didn't drink, smoke, do drugs, party. He loved music and working. He was focused on his goals," she said.

She said he wanted to be just like Jay-Z, who Forbes says is the first billionaire rapper.

"He started mowing lawns at 13 and saving money because he wanted to own his own business very young," she said. "He recruited other kids to work for him in the lawn business, and he was so good. I was so proud of him."

Rides was getting ready for her son's funeral on Monday.

"My son's not aggressive. My son's never been in any gang in any affiliation with anything," she said. "He's a good boy. He's a good baby. He's my baby, and I have to bury him. I'm on my way to bury him right now."