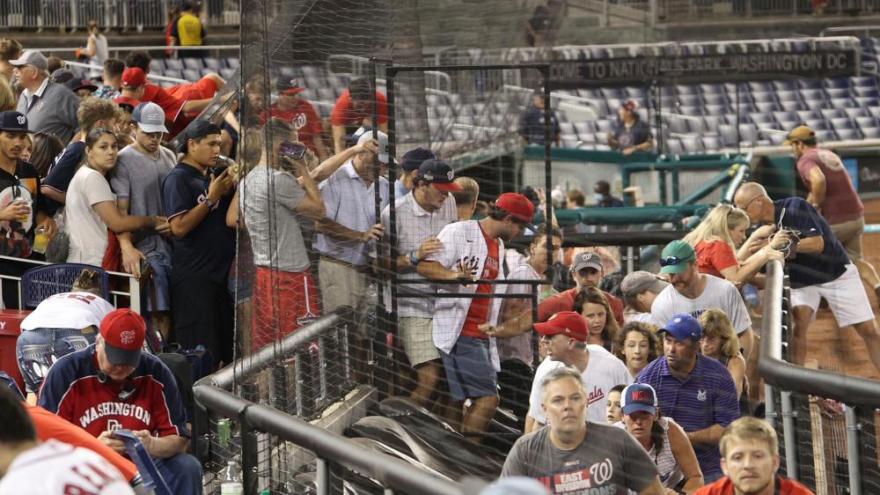 Fans leave their seats as a shooting took place outside Nationals Park during an MLB game in Washington, DC, on July 17.

A fan outside of the stadium was one of three people wounded, according to Ashan Benedict, executive assistant chief of police for DC's Metropolitan Police Department.

The fan who was shot, a woman, is expected to recover, Benedict said. Police initially said in statements posted on Twitter that four people were shot.

The two other people wounded in the shooting were associated with a recovered vehicle and are now in the hospital being questioned by police, according to Benedict. It's unclear what their exact involvement was in the incident. Benedict also said those individuals were known to law enforcement.

CNN journalists inside the stadium reported hearing multiple loud bangs during the bottom of the 6th inning in a game between the Washington Nationals and San Diego Padres.

Fans fled their seats and sought shelter after hearing the gunfire. Benedict said there ultimately was no threat to people inside the stadium.

"I just want to assure the public that at no time during this incident were individuals inside the stadium attending the game in any kind of danger. This was not an active shooter incident and it's not being investigated as such. Everything took place outside the stadium," he said.

Benedict told reporters that two vehicles were involved in a "shootout" on a street outside of the stadium during the game. Police recovered one of the vehicles but the other remains at-large.

On Sunday, the Metropolitan Police Department released images of the at-large vehicle, which they identified as a gray Toyota Corolla with a missing hubcap on the rear driver's side. Police said the car, seen in photos captured by surveillance cameras in the area, has dark-tinted windows and investigators believed it had a temporary Virginia tag.

Members of the public who can identify the vehicle are asked to notify police via their tip line.

The Washington Nationals had fans shelter-in-place inside the stadium during the immediate aftermath of the gunfire, according to Scott Fear, vice president for public safety and security for the Washington Nationals. A message on the scoreboard shortly after the shooting told fans to remain inside the baseball park, but it was later updated to say it was safe for fans to leave the stadium.

"We held shelter in place for approximately 10 to 15 minutes. At that time we said fans were allowed, not that they had to, but they were allowed to exit through Center Field Gates and Right Field Gates on the other side of the stadium, because MPD had let me know that it was safe enough that they could go outside, out of the gate that way," said Fear.

In a joint statement Sunday, Washington, DC, Mayor Muriel Bowser and Mark D. Lerner, managing principal owner of the baseball team, condemned the shooting, saying they "stand together against senseless acts of gun violence in the city we love."

"Gun violence -- no matter where it occurs in our city -- is unacceptable and will not be tolerated."

A police spokesperson said the Metropolitan Police Department had increased patrols in the area surrounding the park.

Washington Nationals Manager Dave Martinez told reporters Sunday that when he heard the gunshots, he believed they were coming from above the the third base dugout.

"I didn't know what was going on, but I wanted to make sure that everybody was safe," he said at a news conference. "As things went on, fairly quickly I heard that it was outside the stadium. But like I said, everything happened so quickly, fans started getting a little bit frantic, which we don't blame."

"When a situation like that arises you try to follow protocol," he said. "But honestly, protocol is to get to safety and take care of your families and hope that everybody stays safe."

Martinez thanked first responders and ballpark security, reiterating that everyone was safe within the stadium.

"I hope that the fans come back and that the fans understand, hey, this happens everywhere, unfortunately," he said. "It's scary when it happens this close to us, but as you all know, this is not just us -- it's happening everywhere."

San Diego Padres Manager Jayce Tingler became emotional as he described about how the players helped usher fearful fans to safety inside the dugout.

"They thought maybe the dugout could have been the safest place, and they led, welcome and guided people in there," Tingler said at a news conference.

"I couldn't be any more proud to be a Padre, to be with the men in there."

San Diego Padres star Fernando Tatis Jr. posted on Twitter his appreciation for those who responded to the shooting.

"Hope everyone is safe! Just keep the prayers up thank you everyone that help in the front line! God bless," he said.

The Nationals thanked fans for their conduct following the shooting in a post on Twitter Sunday, writing, "you handled yourselves in a very admirable manner. You stayed calm. You helped one another."

"We have always known that we have the best fans in baseball," the post said. "Last night, you showed it. Davey Martinez said it best -- our fans are our family. Thank you."

This story has been updated to reflect that DC's Metropolitan Police Department revised the number of people it reported injured in the shooting.