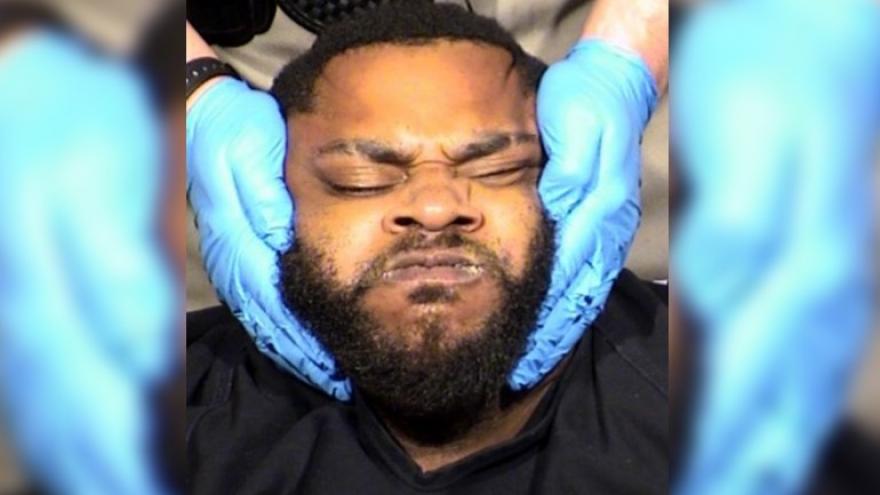 In one morning, a Las Vegas woman lost her infant daughter, had her apartment catch fire, killing her dog, and now the man who was her soon-to-be husband faces a prison sentence.

She wasn't breathing after the 22-ft. fall.

On Jeffreys Street, in the south Las Vegas Valley, a neighbor arrived home that morning to see the aftermath. She started CPR on the infant, who would later die at the hospital.

The couple's downstairs neighbor told police she heard screaming and banging upstairs, looked out and saw Martin, who she knew only by face. He allegedly left the apartment saying, "Burn, [expletive], burn. This is what you get for cheating on me."

When Las Vegas Metropolitan Police were on scene, they heard a crash from the woman's white Mercedes Benz hitting a Toyota Corolla as it left the apartment complex, driven by Martin.

The neighbor and officers noticed smoke coming from the apartment at the same time an ambulance was arriving for the infant. The Clark County Fire Department responded to the "fully involved" fire. Seven other apartments had to be evacuated due to the damage.

Police later said a poodle was found dead inside the home, "likely succumbed from exposure to the heat and smoke due to the fire."

At 4 a.m., 15 minutes after the initial 9-1-1 call, Martin was inside McCarran International Airport trying to open a locked door, according to his police report released Monday. He wasn't wearing a shirt, said an airport employee. When she approached Martin, he allegedly crawled into the baggage conveyor belt into a secure area of the airport.

The breach was reported to security and Las Vegas police officers followed closely behind.

Police say in the break room, Martin was able to obtain a TSA Security shirt. He put on the shirt and took off his pants. Then near the tarmac, Martin placed items into an American Airlines employee's work van. Martin was placed in custody after kicking an officer in the leg, reportedly yelling "Burn [expletive]! Jeffreys Street, Jeffreys Street!"

Martin was taken in custody to University Medical Center.

Nearing 5 a.m., police say baby London was pronounced dead. A GoFundMe has been set up for the woman to cover the funeral costs and loss of her home.

The infant's mother told police they had been together four years and that he was her fiance. She said Martin had mental health issues in the past "but she had not seen any issues until the last three days," the report states. He hadn't eaten or slept in that timeframe.

She fell asleep with her baby about 1 that morning. She told police she woke to Martin kicking her and the baby to the floor. She took the baby to the living room and sat on the couch. That's when she says Martin pulled the baby from her arms and went onto the porch. He stepped back inside a moment later without the baby.

The woman ran outside to see her infant daughter on the ground.

Martin was booked in absentia for open murder, arson in the first degree, killing an animal, battery on a protected person and duty to stop at the scene of an accident. He's expected in court later this week.