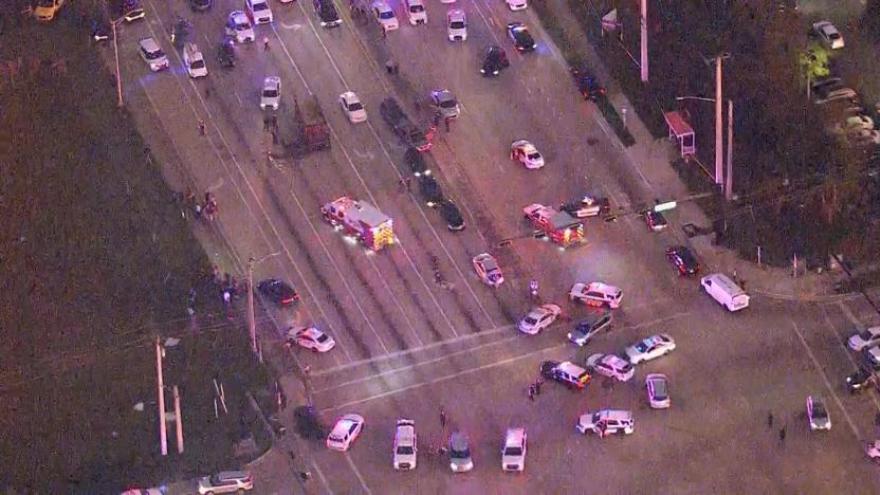 After a police chase in Florida ended in a shooting at a crowded intersection last week, leaving four people dead, authorities released audio of several 911 phone calls that depict the chaos and fear prevalent among the bystanders.

(CNN) -- After a police chase in Florida ended in a shooting at a crowded intersection last week, leaving four people dead, authorities released audio of several 911 phone calls that depict the chaos and fear prevalent among the bystanders.

Many of the calls came from people who found themselves in a police shootout when a hijacked UPS truck came to a stop at a crowded intersection in Miramar, a city in South Florida.

As gunfire erupted, the vehicles stopped at the traffic light became shields for the police officers trying to stop two suspects, who had taken over the UPS truck after robbing a jewelry store.

Of those who called, many did so to report bullet holes in their cars. The calls were released by the Miramar Police Department.

One woman said her car was right next to the UPS truck. She managed to wiggle out, she says in her call, but her car was still damaged.

Another man, whose truck was caught in the crossfire, told the operator the bullets passed "all the way through my truck," including his daughter's car seat. "Thank God" she wasn't there, he said.

One woman, calling from a beauty salon close to the incident, said she saw all her coworkers running, though she didn't hear the gunshots herself. Another man called on behalf of his wife, who was at a nearby beauty salon, heard the gunshots and got scared.

Another woman's tire was shot, leaving her car stranded. When asked if she was OK, she said, "I'm all right, I just got a little shaken up. But I was able to get away eventually."

Richard Steven Cutshaw, a 70-year-old union field representative, was driving home from work when the shootout erupted, and he was killed. His family wants authorities to investigate what led to his death.

"What happened to Richard is a tragedy that no other family should have to bear," his family said in a statement Friday. "He was sitting in his car on his way from a job he loved, when the intersection around him erupted into a war zone. We cannot make sense of what happened to him; it's unfathomable."

Adrian Mendiondo, an attorney representing Cutshaw's family, urged anyone who has any information, photos or videos about the shooting to contact authorities.

"They deserve a comprehensive investigation into the sequence of events that led to his death," Mendiondo said. "We need to make sure this incident is not overlooked or swept under the rug. It is a miracle that only two innocent persons were killed, and we have promised Richard's family that we will do everything in our power to hold those responsible accountable."

How a robbery turned into a police chase

The shooting in Miramar began when two suspects robbed Regent Jewelers in Coral Gables, authorities said. At least one woman was hurt in the initial robbery.

While attempting to flee the crime scene, the suspects hijacked the UPS truck, taking the driver hostage and speeding away. The suspects made it at least 25 miles away, hopping curbs, maneuvering around other vehicles and dodging police.

The chase ended at the intersection of Miramar Parkway and Flamingo Road, just over an hour after the initial robbery. The truck was boxed in by rush-hour traffic, and more than 40 police and emergency vehicles were in its wake.

Officers exited their vehicles and used the surrounding cars as shields to approach the UPS truck. It is unclear who opened fire first.

In the chaos, the two robbery suspects, the UPS truck driver taken hostage and Cutshaw, were killed, authorities said.

The UPS driver was Frank Ordonez, a 27-year-old man who relatives say had been substituting for a colleague who had called out from work that day.

The slain robbers and hijackers were Lamar Alexander, 41, and Ronnie Jerome Hill, 41, both of Miami-Dade County, the FBI said.