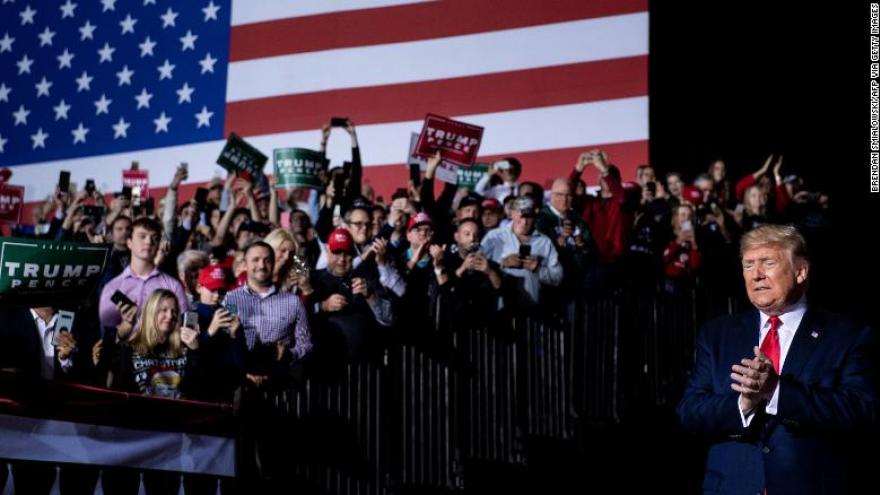 Law enforcement officials have arrested a man they say drove a van through a tent in a Walmart parking lot Saturday in Jacksonville, Florida, where Trump campaign volunteers were registering people to vote.

(CNN) -- Law enforcement officials have arrested a man they say drove a van through a tent in a Walmart parking lot Saturday in Jacksonville, Florida, where Trump campaign volunteers were registering people to vote.

The Jacksonville Sheriff's office arrested Gregory Timm, the office said in a series of tweets early Sunday. He faces charges including aggravated assault, criminal mischief and driving on a suspended driver's license.

The local sheriff's office is investigating whether the incident was politically motivated. There were no injuries reported.

Timm appeared in court on Sunday afternoon and was held pending bond. He is scheduled to appear in a hearing next month.

Six Trump campaign volunteers say they were targeted while getting out the vote, according to the Duval County Republican Party and the Trump reelection campaign.

Lt. Larry Gayle of the Jacksonville Sheriff's Office told CNN affiliate WJXT that at some point after the man driving the van stopped, he recorded a video and "flipped off" the people inside the tent before driving away.

CNN has reached out to the sheriff's office for comment.

"We don't know if this is politically motivated," Gayle told WJXT.

The Duval County GOP, in a series of tweets, says at approximately 2:45 p.m., a brown and gold van driven by a man accelerated toward a crowd of volunteers in a tent registering people. The party said the volunteers narrowly avoided being injured after the van drove through the tent hitting a table.

Jacksonville Mayor Lenny Curry called the incident "outrageous" and said the "hate is toxic and dangerous."

Although police have not determined the motivation of the incident, GOP leaders, including President Donald Trump, swiftly weighed in on social media.

Trump campaign spokesman Tim Murtaugh wrote in a tweet Saturday, "This is reckless intimidation & someone could have easily been killed."

Trump wrote in a Saturday tweet, "Law Enforcement has been notified. Be careful tough guys who you play with."

The president of the Duval County Democratic Party also released a statement condemning the attack.

"The Duval County Democratic Party condemns this cowardly act of violence," Daniel Henry wrote. "No one's life should be placed in danger for exercising their first amendment rights. As Democrats, but more importantly, as residents of this great city of Jacksonville, we call on our fellow citizens to act with dignity, civility and respect for one another during this election cycle and beyond. We look forward to JSO's arrest of the perpetrator."

Florida Republican Sen. Rick Scott posted on Twitter that he was thankful no one was hurt.

"This appears to be a politically-motivated attack on hard-working volunteers in Duval County. Thankful that no one was hurt. @DuvalGOP will not be silenced or intimidated. They will redouble their efforts to support strong Republicans in NE Florida and around the state!"

Florida Republican Sen. Marco Rubio echoed those sentiments in a tweet, "Thanking God that no one was injured in today's politically motivated attack against @DuvalGOP volunteers today."