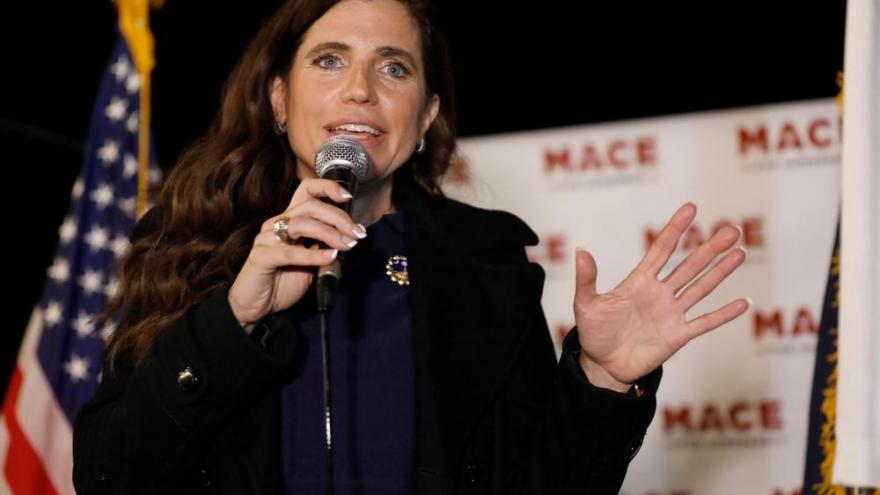 (CNN) -- The Charleston South Carolina Police Department has opened an investigation into a vandalism incident that occurred at the home of Republican Rep. Nancy Mace, a spokesman for the department told CNN.

Mace announced Tuesday that her home in Charleston was vandalized with profanity and graffiti, as the question of how members secure themselves in their home districts continues to be a challenge, especially in the wake of the January 6 violent insurrection at the US Capitol.

In a video posted Tuesday, Mace detailed the vandalism on and around her house, showing where phrases such as "pass the pro act" -- a reference to a bill encouraging unionization -- as well as "all politicians are bastards," "F*ck you Nancy," and 3 Antifa symbols were spray-painted.

"I woke up this morning to my house being vandalized last night," Mace said in the video. "What makes me so angry is this is a house that I live in with my kids, my two kids."

Charleston Department of Police Public Information Officer Charles E. Francis confirmed to CNN that the department is investigating the incident, but no arrests have been made. On Wednesday, a spokesperson for US Capitol Police told CNN that the law enforcement body is also "aware and investigating" the incident.

Thanking her local police department for responding to the incident, Mace said in a press release, "I sincerely appreciate law enforcement doing all they can to find the criminal trespassers who vandalized my home with Antifa symbols and profanity on Memorial Day."

Mace also used the instance of vandalism at her home to address the fraught nature of the current political environment.

"There is a significant difference between nonviolent protests, and criminal acts of intimidation and vandalism. We should all be able to feel safe in our own homes, regardless of our political beliefs," Mace said. "I urge everyone to take a moment to think about their words and their actions at this time. And it's not just social media, but our words impact real people and impact real lives. We should think about taking it down a notch."

"I hope people realize just how hard I'm working with both sides of the aisle -- a particularly difficult task -- given the vitriol in our current political environment. We can and we should do better for our communities and for the American people" Mace added.

US Capitol Police announced on May 7 that there has been a 107% increase in threats against members of Congress this year compared to 2020, with that number expected to increase.

As members continue to grapple with how to secure themselves in their home districts, the House of Representatives passed a $1.9 billion spending bill to increase security at the US Capitol in response to the deadly January 6 insurrection with money specifically allocated for the personal security of members and their district offices.

The plan would have $7.4 million set aside to increase security for lawmakers, including threat assessments, and $10.6 million would go toward security measures and the installation of camera systems in district offices for members.

Now that the House has approved the bill, it will need to pass the Senate before it can go to President Joe Biden's desk.