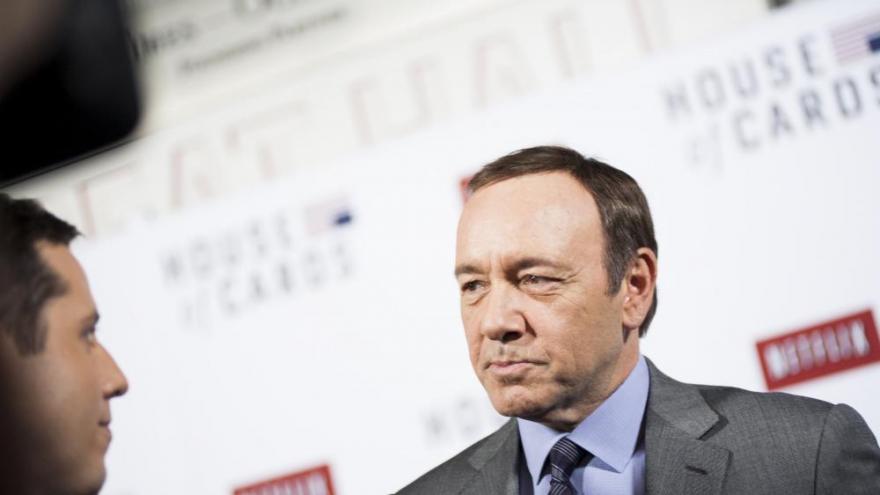 The 18-year-old who said that actor Kevin Spacey groped him at a Nantucket bar in 2016 took Snapchat video of the alleged assault, and investigators have that video, according to a criminal complaint filed in Nantucket District Court.

(CNN) -- The 18-year-old who said that actor Kevin Spacey groped him at a Nantucket bar in 2016 took Snapchat video of the alleged assault, and investigators have that video, according to a criminal complaint filed in Nantucket District Court.

The complaint from Massachusetts State Police details an incident between Spacey and a busboy at the Club Car, a restaurant and bar on Nantucket, late on July 7 into July 8.

The busboy, who was 18 at the time, told Spacey he was 23 and studying business at Wake Forest University, according to the complaint. That night, Spacey bought him a number of alcoholic drinks, bragged to him about the size of his penis, and tried to get the busboy to go back to his house afterward, the accuser told police in the complaint.

Later, as the two stood near the piano player in the bar, Spacey reached over and began to rub the busboy's thigh, the complaint states. Spacey then unzipped the accuser's pants and rubbed his penis, both in and out of his pants, for about three minutes, he told police.

In his interview with police, investigators showed the busboy that video and confirmed his and Spacey's clothing that night.

The complaint comes more than a year after the alleged victim's mother went public with the allegations against Kevin Spacey. Heather Unruh, a former TV news anchor in New England, held a press conference in November of 2017 saying her son her son had been sexually assaulted by Spacey.

Spacey faces a charge of indecent assault and battery, Cape & Islands District Attorney Michael O'Keefe said Monday. He is scheduled to be arraigned on January 7. CNN has reached out to Spacey's attorney for comment.

Girlfriend confirms she saw the video

In a separate interview, the busboy's girlfriend told police that he had indeed texted her that Spacey was hitting on him. She confirmed that she received a Snapchat video from him showing Spacey touching the front of his pants by his crotch, though she couldn't give any more details on it, the complaint states.

Generally, videos taken on Snapchat disappear from the app after they are watched, though users are sometimes allowed to replay a video. Snapchat's law enforcement guide says that the company often cannot retrieve user content, except in very limited circumstances.

After several minutes of the alleged groping, Spacey got up to go to the bathroom, and the busboy left the bar. While on his way home, Spacey texted him, "I think we lost each other," and the busboy did not respond, the complaint states.

He said that he told his younger sister what happened when he got home. She called their mother. He also returned to work the next afternoon and told his boss about the incident, the complaint states.

The accuser's younger sister told police in an interview that he was acting unusual when he got home late that night, the complaint states.

Investigators also interviewed several employees at the bar who confirmed that Spacey and the busboy had been seen together that night, although none witnessed an assault.

He said the incident was embarrassing but has not had a profound emotional effect on him, according to the complaint. He decided to come forward and tell police because he did not want what happened to him to happen to someone else, he told police.

In a hearing last week to determine if there was enough evidence for Spacey to be charged, his lawyers questioned a Massachusetts state trooper about the video.

Their questioning hinted at their strategy, focusing on the amount of time it took the accuser to go to police, and his behavior on and off camera.

Trooper Gerald Donovan said the accuser gave his first full statement to police on November 22, 2017. He told police that he lied about being a 23-year-old college student, Donovan said. According to the accuser, the encounter lasted about 70 minutes, during which time he consumed 8 to 10 drinks, including beers and whiskey.

The video is less than one second long. It shows a hand making contact with a shirt, but no body parts are visible in the video, Donovan said. In the video, the accuser is wearing a blue shirt, even though he told police he was wearing a red one, the trooper said.

Donovan said he learned that, before the alleged assault, the accuser gave Spacey his phone number, went outside to smoke, and went back inside with Spacey.

Under questioning from lawyer Alan Jackson, Donovan said he found no witnesses to corroborate the accuser's claim that Spacey groped him for three minutes.

Once one of Hollywood's most famous and recognizable actors, Spacey's career collapsed in November 2017 following several allegations of sexual assault and harassment.

First, actor Anthony Rapp accused Spacey of making a sexual advance toward him in 1986 when he was 14 years old and Spacey was 26, Rapp told BuzzFeed News.

In a Twitter statement, Spacey said he did not remember the incident but offered an apology. In that same statement, he came out as a gay man, a decision sharply criticized for its seeming attempt to conflate his sexuality with a serious allegation of wrongdoing.

"Coming out stories should not be used to deflect from allegations of sexual assault," Sarah Kate Ellis, president and chief executive officer of GLAAD tweeted at the time. The actor did not respond to CNN's request for comment.

Netflix fired Spacey days later following a CNN report in which several current and former members of the "House of Cards" production staff came forward with allegations of sexual harassment. One former production assistant told CNN that Spacey sexually assaulted him during one of the show's early seasons.

Spacey had been silent since his apology until Monday, when he posted a video to his Twitter account speaking directly to the camera in the persona of his "House of Cards" character Frank Underwood. The character was killed off in the show after Spacey was fired.

"Of course some believed everything and have just been waiting with bated breath to hear me confess it all," he said with the character's Southern accent. "They're just dying to have me declare that everything said is true and that I got what I deserved. Wouldn't that be easy if it was all so simple? Only you and I both know it's not that simple, not in politics and not in life."