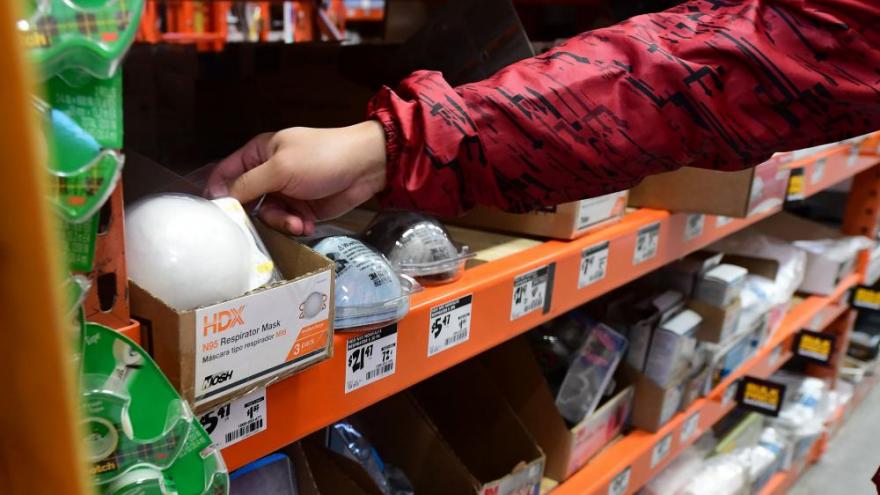 A man reaches out for a mask at a Home Depot store in Los Angeles on January 22.

(CNN) -- As the coronavirus pandemic continues to affect nearly every area of life, law enforcement agencies around the country are changing the ways they respond to service calls to reduce officers' contact with possible carriers of the virus.

Police officers and other law enforcement personnel come into contact with countless people in their communities on any given day. Now that this highly contagious disease is spreading across the US, their jobs carry a new risk -- both for officers themselves and for the communities they serve.

Here's what some police departments are doing to contain the spread of the virus in their precincts.

Some departments are closing their front desks

Many police departments are asking residents to report non-emergency incidents online or over the phone.

The Los Angeles Police Department said in a statement that it is closing the front desks and walk-up service at area stations beginning Wednesday. Instead of visiting stations in person, the department advises that the public email those front desks.

"Rest assured, we will still respond to crimes in progress or a crime in need of immediate follow up, as Watch Commanders will dispatch patrol officers to those incidents," the statement reads.

Police departments in the California towns of Bakersfield and Delano also said they were closing their front lobbies, according to CNN affiliate KGET.

Some say they won't respond to non-urgent calls

The Syracuse Police Department in New York said it would not be responding to non-emergency calls, which would instead be directed to its phone or online reporting systems.

Authorities in Arlington County, Virginia, tweeted a graphic on Monday advising the public to use its online reporting system for incidents including credit card fraud, theft, harassing phone calls, vandalism or vehicle tampering.

The department said its officers were continuing to patrol around the county and would still respond to in-progress crimes or emergencies where there is "an immediate threat to life, health or property."

In Lyndhurst, New Jersey, the police department said officers would take reports for certain non-emergency calls over the phone, such as those that don't require an investigation on the scene or the collection of evidence.

"We feel that because our officers interact with many people throughout the day, limiting as much exposure as possible will aid us in contributing to our social distancing responsibility to the public," the department said in a news release.

"We're going to do you a solid. We're not going to bring germs to you," the department wrote in a Facebook post on Tuesday, adding that it would take reports for incidents that didn't require officers to be physically present over the phone.

"This 1) saves us one of dozens of face-to-face contacts that have the potential to spread the virus, and 2) does not require you to get dressed and brush your teeth because you are having guests (us)," the department continued.

"So, we will still respond to your call, just not in person. If you NEED us to come to you, we will do that just as we have for almost 200 years. But we'd prefer if you at least put on pants."

When officers do have to respond in person, many of them will be following social distancing protocols and other guidelines recommended by the Centers for Disease Control and Prevention.

The Arlington County Police Department said that people who report or witness emergency incidents could be asked to step outside to speak to officers. Officers, meanwhile, might be wearing gloves, masks or goggles.

In New Jersey, the Lyndhurst Police Department said that officers who have to make in-person visits will keep a "safe distance" and refrain from shaking hands.

The CDC says that law enforcement personnel who make in-person visits should protect themselves from coronavirus exposure by maintaining a distance of at least six feet, practicing proper hand hygiene and not touching their face.

People who might have the virus should be transported to healthcare facilities by emergency medical service personnel or technicians rather than law enforcement, according to CDC guidelines.

For law enforcement personnel who must make contact with people who are confirmed or suspected to have the virus, the CDC recommends they wear appropriate personal protective protective equipment.