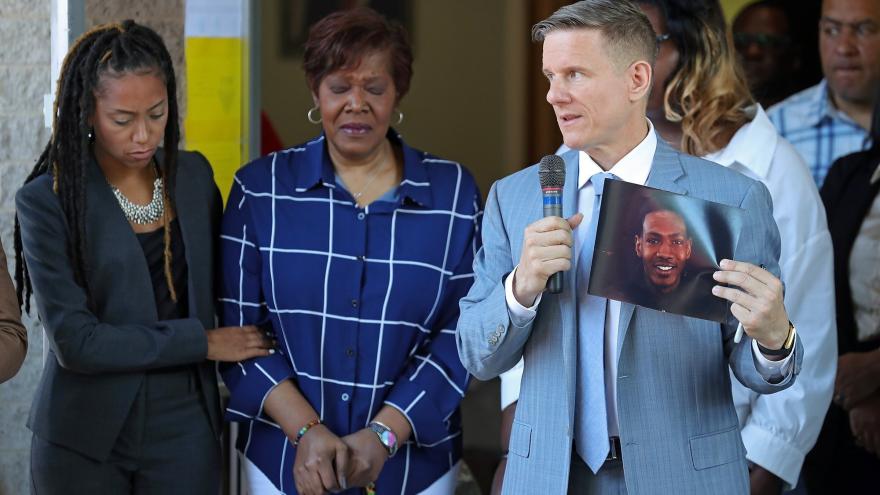 (CNN) -- The Akron, Ohio, police chief said the handcuffing of Jayland Walker after he was shot dozens of times by city police officers was in accordance with department policy, but added the city will review its policy.

In an interview with CNN affiliate WEWS, Akron Police Chief Stephen Mylett said his officers restrained Walker's hands behind his back after shooting him with a barrage of bullets.

Walker, 25, was killed June 27 after he fled what police said was an attempted traffic stop, leading officers on a car chase and then a brief foot chase. It ended after he quickly stopped and officers believed he was reaching toward his waist and moving into a "firing position," officials have said.

Eight officers fired dozens of bullets. Walker suffered at least 60 gunshot wounds, authorities have said. Walker fired what appeared to be a gunshot out the window during the car pursuit and a gun was found in his car after the shooting, but Walker was unarmed when he was killed.

Akron police, the city and police union have not responded to CNN's repeated requests for comment about the practice of restraining suspects even after being shot by officers.

In the interview with WEWS, Mylett said policy requires after all officer-involved shootings, a suspect be handcuffed because they may continue to pose a threat.

A preliminary autopsy report previously reviewed by CNN contained several pages of thumbnail photos showing Walker dead and handcuffed at the scene and after his body arrived at the coroner's office.

Mylett said the restraints are left on to preserve the crime scene.

Jada Walker, Jayland's sister, has set up a GoFundMe to help with funeral costs.

On Friday, Akron Mayor Dan Horrigan announced starting Monday, he and the police chief will host daily press briefings to "provide timely and consistent safety updates, and to more quickly relay information to both the public and the press."

The city will also launch an incident website which will include safety information and serve as "a collective hub for all the information available to the public" in relation to Walker's shooting, according to a news release from the city.

"I know that the situation in Akron is ever-evolving, and our community needs to have the most up-to-date information as quickly as possible," the mayor said in a statement. "Our new dedicated site and these daily briefings will help us better commit to our promise of transparency and allow our residents to have a clearer understanding of exactly what is happening as it occurs."

In a video posted on social media, the mayor also called for peace in the city after protests during which authorities said they made dozens of arrests and there was property damage done.

The demonstrations also prompted Horrigan to issue a curfew for downtown Akron.

"I know we've had many, many peaceful protests over the last week and I fully support, and it's my duty to support our citizens' right to let their voices be heard," the mayor said in Friday's video. "But what I cannot allow, however, is the type of violence and lawlessness that we've seen at some of these late night protests."

"I can't allow violent protests to come to my house and threaten me and my family," he added, saying he was committed to transparency, community dialogue and engagement.

"We have to allow this independent investigation to run its course, because there can be no healing without truth," Horrigan said.