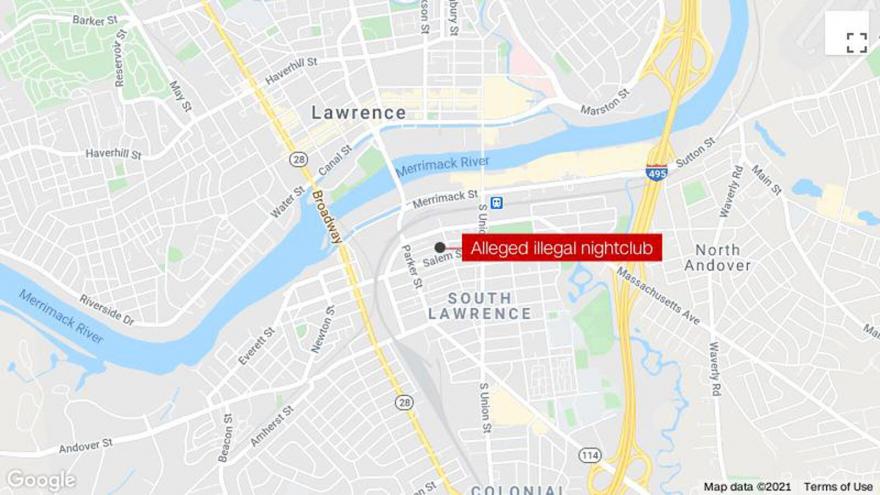 Police in Massachusetts broke up an "illegal night club" in a residential basement with a full bar and a waitress -- and the city is investigating possible Covid-19 restriction violations.

(CNN) -- Police broke up an "illegal nightclub" with a full bar and waitress that had been set up in the basement of a Massachusetts residence -- and authorities are investigating possible violations of Covid-19 restrictions.

After a complaint of loud music in a residential area of Lawrence early Monday, police initially did not find anything but officers saw "a large amount of foot traffic" heading to a home on Springfield Street.

"Upon further investigation, the Officers observed an 'illegal nightclub,' complete with a waitress and full bar," according to a statement posted on the police department's Facebook page.

The building had an estimated 100 people inside along with charcoal hookahs and external propane heaters being used, police said.

CNN affiliate WCVB reported that 20 tables and a bar were set up in the multifamily home's basement, along with a whiteboard listing menu items. Police confiscated nearly 50 bottles of alcohol and liquor, WCVB reported.

"You wouldn't be able to tell looking at it from the outside, that's the whole point," Police Chief Roy Vasque told WCVB. "They basically set up the basement like an elaborate club."

Vasque told WCVB that authorities were concerned about the possibility of Covid-19 infections due to so many people crowding into a small room.

"This could be one of those super spreaders, you know, type of situations that you hear about," Vasque told WCVB. "So absolutely inappropriate, irresponsible and stupid."

Vasque said fines could be levied against the building's owner for safety violations, including a lack of smoke detectors. The property owner told police that the basement was supposed to be empty and police are still investigating who was running the establishment, WCVB reported.

Lawrence is about 28 miles north of Boston and has a population of 80,028 people, according to the latest Census Bureau estimate.

The city has reported 16,403 cases of Covid-19 and 211 deaths, according to the Lawrence Board of Health. It currently has enough daily Covid-19 cases to place it in the red zone of Massachusetts' coronavirus restrictions, the highest tier. For communities in the red zone, indoor gatherings at private residences are limited to 10 people.