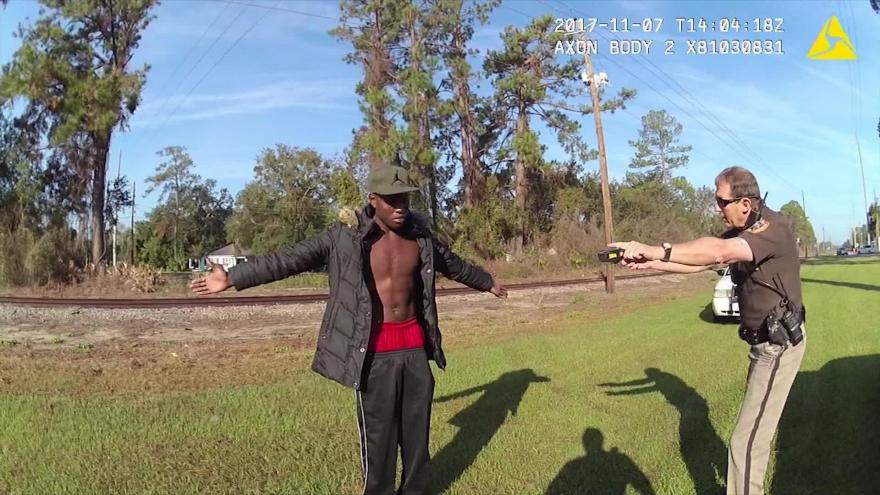 Police in Glynn County, Georgia, attempted to use a Taser on Ahmaud Arbery during an incident in 2017, according to a police report and police body camera video obtained by CNN.

(CNN) -- Police in Glynn County, Georgia, attempted to use a Taser on Ahmaud Arbery during an incident in 2017, according to a police report and police body camera video obtained by The Guardian.

The events captured on the body camera do not appear to line up entirely with what the first responding officer wrote in his report.

According to a police report from that incident, an officer was patrolling Townsend Park on November 7, 2017, when he noticed a vehicle parked in an area "known for drugs and other criminal activity."

Attorneys for the family confirm it is Arbery -- who was shot and killed during a confrontation while jogging in February -- in the 2017 video.

In the body camera video, the officer checks Arbery to see if he has any weapons on him.

Arbery repeatedly demands to know why he is being questioned and begins to argue with the officer, who asks to search his vehicle.

"He raised his voice and approached me," the officer wrote. "I observed veins popping from his chest which made me feel he was becoming enraged and may turn physically violent toward me."

Though Arbery is agitated, he complies with most of the officer's demands. However, he tells the policeman not to touch him and not to search his car and repeatedly challenges the reasons given for his questioning, the video shows.

Another officer arrives a short time later, and the officer already on the scene fails to disclose to his colleague that he's already checked Arbery for weapons, the video shows.

After Arbery again declines to let the officers search his car, he heads toward the driver door and the officer who just arrived tells him, "Don't reach in it, buddy," and draws his Taser. Arbery backs at least three steps away from the car, the video shows, and his hands drift toward his pants pockets.

The officers instruct Arbery to take his hands out of his pockets, which he does immediately, holding them out wide in plain view. Still, one of the officers then deploys his Taser, which does not work. He curses and orders Arbery to the ground, the video shows. Arbery complies again, and only then does the original officer inform his colleague that he has already checked Arbery for weapons.

The police incident report suggests that Arbery posed a danger to the officers.

The original officer wrote in his report that after Arbery was instructed to remove his hands from his pockets, "Arbery did not take his hands out of his vehicle; therefore, (the other officer) attempted to deploy his Taser to protect himself and I from the possibility of death or serious bodily harm."

Arbery, 25, was jogging in a neighborhood outside Brunswick, Georgia, on February 23 when a former police officer and his son chased him, authorities said. They stopped their truck in his path and during a confrontation, Arbery was shot and killed.

The men, Gregory and Travis McMichael, were arrested more than two months later and charged with aggravated assault and murder.

In a statement to CNN, S. Lee Merritt, Benjamin Crump and L. Chris Stewart, attorneys for Arbery's family, said, "The video released today regarding an incident involving Ahmaud Arbery from 2017 clearly depicts a situation where Ahmaud was harassed by Glynn County police officers. This type of behavior by the department is well-documented."

"Initially, Mr. Arbery is rightfully upset by what he perceives as being approached for no legitimate reason," attorneys for Arbery's family said in the statement. "The officer acknowledges that he hasn't done anything wrong. Ahmaud Arbery maintains his composure, however, even when the second officer to arrive on the scene immediately escalates the situation, pulls out his Taser and attempts to use it on Mr. Arbery for no justifiable reason. Ahmaud was not arrested or charged with any crime."

"This appears to be just a glimpse into the kind of scrutiny Ahmaud Arbery faced not only by this police department, but ultimately regular citizens like the McMichaels and their posse, pretending to be police officers," Merritt, Crump and Stewart told CNN.