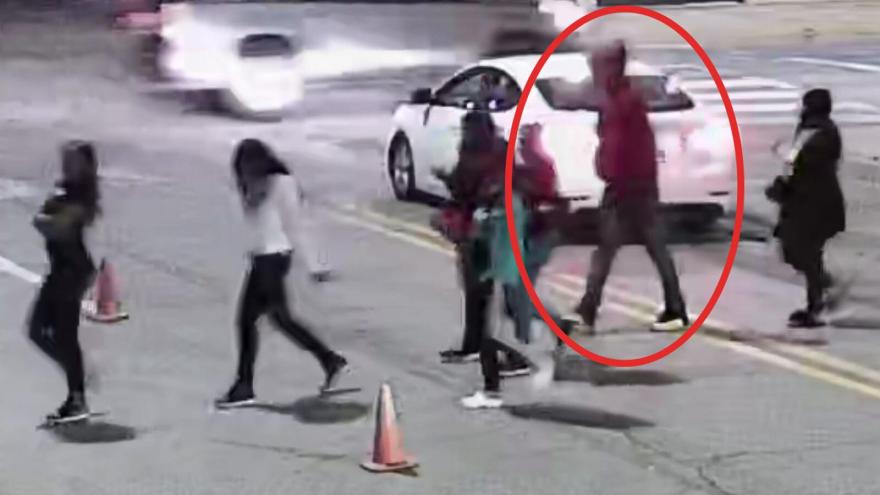 The suspect is said to be about six feet tall and was wearing an orange sweatshirt and jeans. CNN placed a red circle on the image to show the suspect as indicated by the Oakland County Sheriff's Office.

(CNN) -- Detroit police are asking for the public's help in identifying a potential suspect in a homicide that occurred outside a popular haunted house.

Deputies responded to a call about a shooting early Sunday morning at the Erebus Haunted House in Pontiac, Michigan. Erebus opened for the season on Friday, and was ranked the number one haunted house in the US by USA Today in 2019.

Police said the victim and his girlfriend were waiting in line at the haunted house when the alleged suspect, who was ahead of them, would not move.

"The victim and the suspect exchanged words as the suspect thought the victim had cut in line ahead of him. The victim then stated to his girlfriend that he was going to his vehicle," the Oakland County Sherriff's Office said in a Facebook post.

Police said that the 29-year-old victim was struck in the side, neck, and chest. He was taken to McLaren Oakland Hospital where physicians pronounced him dead.

Witnesses said that the suspect was wearing an orange sweatshirt and jeans and raced from the scene in a blue sedan.

Police are offering a reward to anyone with information and is asking the public to contact the department or Crime Stoppers with tips.

A spokesperson for Erebus Haunted House did not immediately respond to CNN's request for comment.