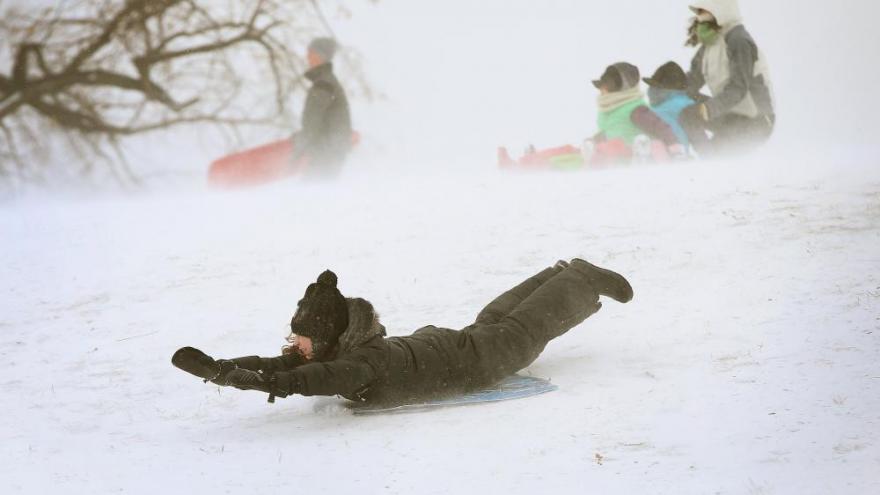 The coldest air in a generation is spilling out across the US thanks to a break down in the polar vortex.

(CNN) -- The coldest air in a generation is spilling out across the US thanks to a breakdown in the polar vortex.

The icy blast it's sending southward is the biggest visitor from the North Pole since Santa Claus. The gifts it brings, however, are chilling and generally unwelcome.

Seventy-five percent of the continental US will dip below freezing at some point this week, leading to record low temperatures across the country. CNN meteorologists Brandon Miller and Judson Jones answer a few pressing questions about this phenomenon.

What is a polar vortex? What distinguishes it?

The polar vortex, as its scary name suggests, is a circulation of strong, upper-level winds that normally surround the northern pole, moving in a counterclockwise direction -- a polar low-pressure system.  These winds tend to keep the bitter cold air locked in the Arctic regions of the Northern Hemisphere. It's not a single storm. On occasion, this vortex can become distorted and dip much farther south than you would normally find it, allowing cold air to spill southward.

How often does this polar vortex distortion occur?

The upper-level winds that make up the polar vortex change in intensity from time to time. When those winds decrease significantly, it can allow the vortex to become distorted, and the result is a jet stream that plunges deep into southern latitudes, bringing the cold, dense Arctic air spilling down with it.

Where on Earth can this happen?

The polar vortex can lead to major cold air outbreaks in any portion of the Northern Hemisphere -- North America, Europe and Asia.

How dangerous is a polar vortex distortion as compared to a tornado or hurricane?

They are completely different types of systems. A cold air outbreak caused by the polar vortex is much more widespread and lasts longer than a single storm. With the widespread drop in temperature, however, you can see significant winter storms develop, especially when the cold air is initially advancing into a previously warm region -- much like the nor'easter during the past week.

When did the last one hit a densely populated area?

Serious cold snaps happen several times a year, though in different regions of the world and with different degrees of severity. Most notable was the polar vortex in the winter of 2014 when cold arctic air spilled out across North America.

It was the first year that the phrase polar vortex was used extensively in the mainstream media. The term took off, especially on Twitter, and meteorologists have been trying to clarify what the name means.

If you get caught up in one, what should you do?

Again, it's not a "storm" that you get caught in. But when faced with significant cold temperatures, you should stay inside whenever possible, layer clothing if you must be outside, winterize your home and car, etc.

Is it a side effect of global warming and should we expect more events like this?

This is a hotly researched topic. In short, yes, it could be. It seems counterintuitive that global warming could cause significant cold snaps like this one, but some research shows that it could.

We know that different types of extreme weather can result from the overall warming of the planet, melting of the Arctic Sea ice, etc.

This includes extreme distortions of the jet stream, which can cause heat waves in summer and cold snaps in winter.