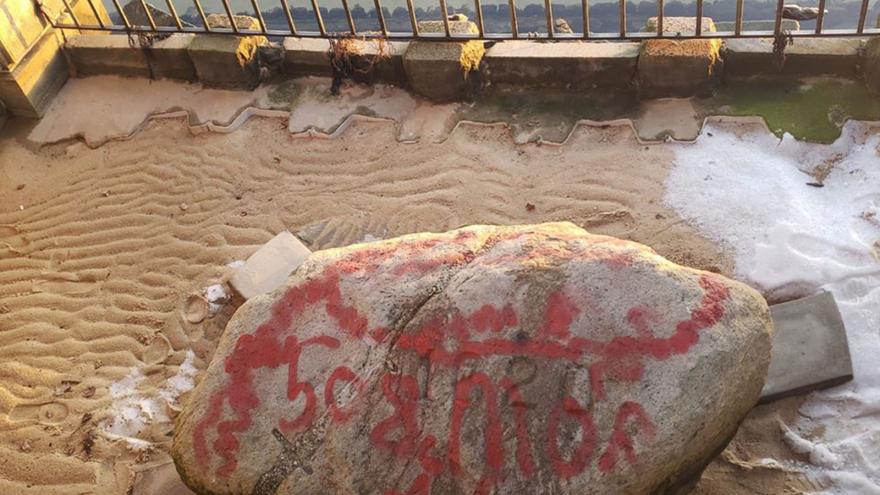 (CNN) -- Preparations to celebrate the 400th anniversary of the Pilgrims arriving in the New World were in full swing in Plymouth, Massachusetts. But then residents woke up to find that the beloved landmarks that make their city special had been vandalized.

Plymouth Rock was one of them.

The iconic landmark, which is inscribed with the year 1620 to mark the year William Bradford and other Pilgrims first set foot on American land, was found on Monday to be covered with red graffiti.

Vandals also spray-painted the Pilgrim Maiden statue and the National Monument to the Forefathers, according to CNN affiliate WBZ.

"We are saddened and sickened by the recent vandalism in our historic town," Plymouth Town Manager Melissa Arrighi tweeted. "We will begin clean up as soon as possible and the police are investigating."

Peter Sullivan, a resident of Plymouth, discovered the graffiti on Plymouth Rock while walking around the Pilgrim Memorial State Park.

He said the graffiti was everywhere.

"They vandalized everything. All the statues, monuments. These people went around town all night and did all kinds of damage," Sullivan told CNN. He noted it's not the first time.

Four artworks in the shape of scallop shells were also vandalized, according to the Plymouth Area Chamber of Commerce. The shells were a project by the Chamber to celebrate the upcoming anniversary.

The shells have already been cleaned by Plymouth Department of Public Works, according to the Chamber, which added that anyone with information reach out to police.