Planet-warming emissions from cow burps have been seen from space 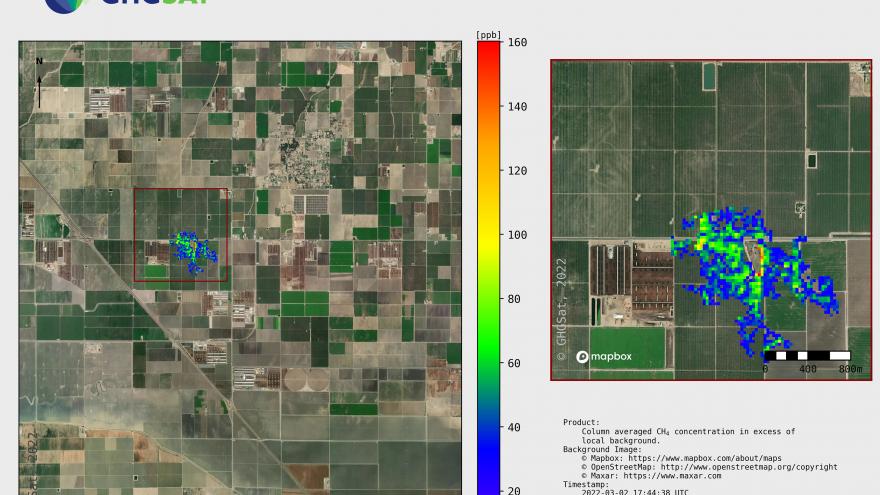 (CNN) -- Methane emissions burped up by cows have been observed from space.

The emissions were detected by environmental data company GHGSat's high-resolution satellites in February, according to a news release from the company. In April the company's analysis confirmed that the emissions came from a cattle feedlot in California's Joaquin Valley.

The satellites recorded five emissions, says GHGSat. If these emissions were sustained for just one year, enough gas would be released "to power 15,402 homes," the company said.

Methane emissions from cattle have been identified as a significant contributor to climate change. As cows digest their food, they release methane, mostly through their gassy burps. But the methane they burp up is a powerful greenhouse gas that traps heat in the atmosphere. The Food and Agriculture Organization (FAO) says that farm cattle contribute to 10% of greenhouse gas emissions worldwide generated by human activity.

And cattle farming is a major industry in California: The state has 650,000 beef cows as of 2019, according to the California Cattlemen's Association.

Brody Wight, the sales director at GHGSat, told CNN this is the first time the company knows of in which scientists were able to use satellite imagery to pinpoint methane emissions from cattle farming. The company has three high-resolution satellites in orbit, which it has previously used to measure emissions from open-pit coal mines. Each satellite is just the size of a microwave oven, says GHGSat.

"This is really pushing the envelope of our capabilities," said Wight. "What's unique about us is we can really kind of get to the source" of emissions, focusing in on specific feedlots.

Each satellite flies over a designated location for just about 20 seconds, taking a quick "snapshot" of emissions, Wight said. Over time, regular monitoring with these satellites could create a "temporal picture" showing the change in emissions over time, allowing farmers to, for instance, test out the impact of different diets on cows' methane emissions.