Plane that crashed in Louisiana was in the air for just over a minute, NTSB says 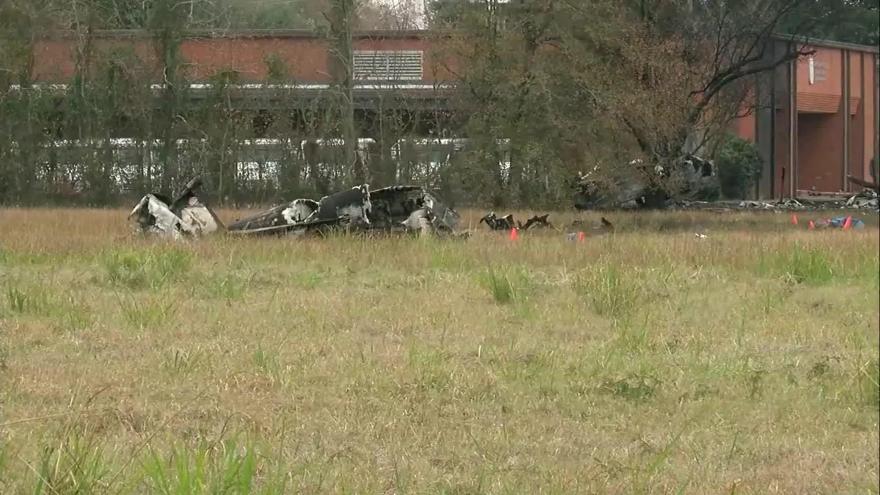 A plane crash in Lafayette, Louisiana, killed five people on board.

(CNN) -- The airplane that crashed in Lafayette, Louisiana, killing five people on board, was intact when it hit the ground, the National Transportation Safety Board said at a news conference Monday.

The plane was in the air for just over a minute before it crashed, NTSB Vice Chairman Bruce Landsberg said.

Landsberg says that investigators with the NTSB are reviewing surveillance video of the crash and are seeking audio that may have been caught by home surveillance systems in the neighborhood.

Six people were aboard the eight-passenger plane Saturday as it headed from Lafayette Regional Airport to Atlanta for the college playoff game between Louisiana State University and the University of Oklahoma. It crashed moments after takeoff, Landsberg said.

Stephen "Wade" Berzas, the lone survivor of the crash, remained in critical condition Monday night after suffering burns on more than 75% of his body, according to Dr. Joey Barrios, medical director of the Our Lady of Lourdes Burn Unit.

Landsberg said Monday that the pilot had flown the plane, identified as a 1980 Piper PA-31T, before and had more than 1,500 hours of flight time. His latest medical certificate was issued in November, according to Landsberg.

The plane was most recently flown from Houston, Texas, to Lafayette on December 18 and had its most recent maintenance completed in October, Landsberg said.

While weather was overcast with a visibility of only three-quarters of a mile Saturday, it was "flyable," Landsberg said.

Witnesses reported seeing the plane close to the ground and shaking before making a left turn into power lines, NTSB investigator in charge Jennifer Rodi said over the weekend.

A resident, Alexis West, told CNN that the plane "was really low to the ground and shaking and it looked like it was coming to land. ... And then it just skidded through the parking lot at the post office and then exploded. There was a big wall of fire."

There was no distress call from the plane and no cockpit voice recorder in the aircraft, investigators said.

A preliminary report on the crash will be available in a week or two while the final report will take at least a year. "We don't rule anything in or rule anything out," Landsberg said.

Investigators have already determined that the debris field is smaller than they first thought, only 700 feet rather than the quarter mile, Landsberg said Saturday.

When the plane crashed and began to burn, people nearby rushed to the scene.

Michelle Rawls told CNN she ran barefoot into traffic and toward the scene as the wreckage burned. Her son had already seen the plane tilted, with no engine sound, as it came through a post office parking lot and into a field.

"I could hear a woman screaming. And that was whenever I was running. My feet were already burning. So I couldn't go any further. It ignited more, and then I could hear one more 'help me,'" Rawls said.

Rawls' son and others ran toward the burning wreckage of the plane to help Berzas.

"I'm not no hero. I'm just somebody that wants to save as many as I can. Since we all need at least somebody to help us," Rawls said.

The Lafayette community is grieving for those victims lost in the crash, Rawls said.

Among those killed were a sports journalist and an IT company executive.

The journalist, McCord was a sports reporter with WDSU in New Orleans. She served as in-game host for the New Orleans Saints and the New Orleans Pelicans and was the daughter-in-law of Louisiana State University Offensive Coordinator Steve Ensminger.

Crisp was an executive for nearly 10 years at Lafayette-based IT company Global Data Systems.

More recently, he was vice president of business development and field services for the company, according to the company's website.