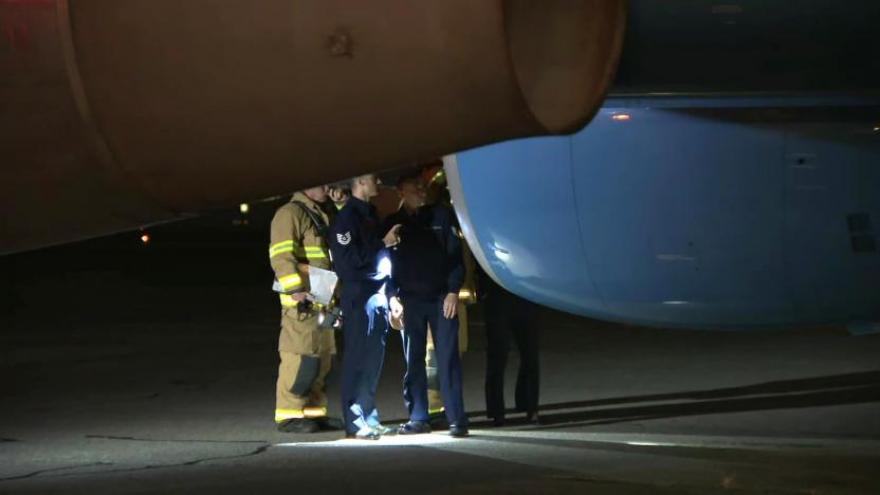 Air Force Two is inspected after an apparent bird strike on Tuesday, September 22.

(CNN) -- Air Force Two -- the plane used to fly Vice President Mike Pence -- safely landed at a New Hampshire airport on Tuesday after hitting a bird in flight, a spokesman for the vice president confirmed to CNN.

The plane was flying Pence back to Washington, DC, after his speech at a Trump campaign rally in Gilford, New Hampshire, when it struck the bird. The pilots decided to return to the airport from which the plane had just taken off out of an abundance of caution, Devin O'Malley, Pence's spokesman, said.

After landing, Pence and his staffers used a cargo plane to return to Washington, according to CNN's travel pool crew.

Notably, this isn't the first plane-related incident Pence has faced on the campaign trail.

In October 2016, the campaign plane carrying Pence skidded off the runway at LaGuardia Airport in New York.

"We're fine," he told CNN's Alisyn Camerota on "New Day" during a phone interview at the time. "It was about 10 seconds of uncertainty last night, but we're just so grateful to the pilots and to the first responders on the scene and (that) everybody came off the plane safely."

None of the 48 people on board were injured in the 2016 incident.