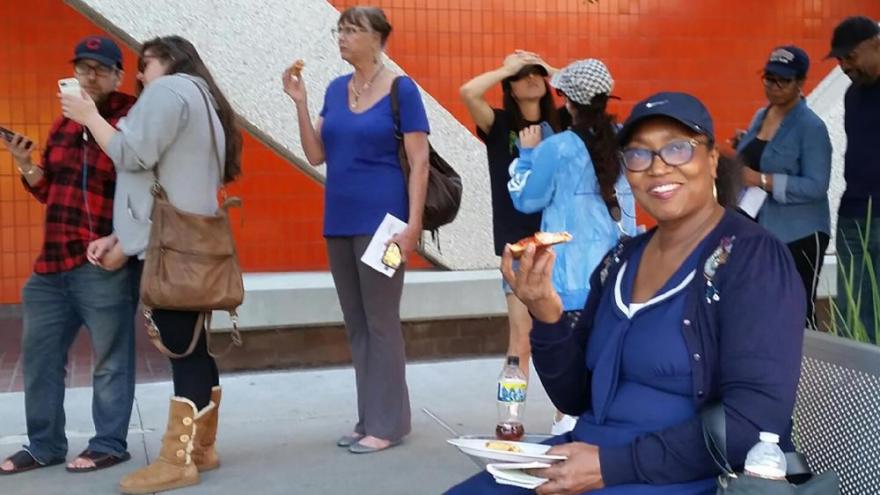 Pizza to the Polls relies on social media to identify where its services are needed on Election Day.

(CNN) -- A staple at birthday parties, bar crawls and bowling, few foods bring Americans together like pizza. And this election season, a new group aims to bring America's favorite pie to those stuck waiting in long lines.

Pizza to the Polls, a nonpartisan grassroots organization, has so far sent 2,068 pizzas to voters casting their ballots in 19 states around the country in the 2020 election. The group hopes to grow its ground game even more as the election gets closer -- and the need is expected to grow.

"There's going to be a ton of lines this year," Scott Duncombe, Pizza to the Polls' co-founder and director, told CNN. "And so we will hopefully be good to go and spend that pizza money as fast as it comes in."

The group, formed in reaction to long lines during the 2016 election, does not align with a political party. It started small -- at a few polling places in Ohio, Florida and Illinois, the group's website says -- and then expanded to expecting its "pizza delivery recruits" to supply hundreds of polling places in 2020.

In 2018, Pizza to the Polls says, it provided almost 11,000 pizzas to 611 polling places in 41 states, according to the group's website. The majority of the pizza is paid for by small-dollar donors, Duncombe said. "The average donation is under twenty bucks, so it's just a lot of folks buying other people pizza."

So far, Duncombe's prediction of long lines in 2020 seems accurate. Although the coronavirus pandemic has led to an unprecedented use of absentee ballots, many Americans still plan to vote in person.

Lengthy wait times were ubiquitous on Super Tuesday -- including in densely populated states like Texas and California. And in June, long lines plagued Georgia, where voters waited for hours in the boiling heat.

Jim O'Conner, a voter in Fairfax County, Virginia, told CNN last week that he was voting in person to make sure his ballot was counted. "I don't trust the mail right now, that's why (I'm voting today). If I got to stand here all day, I'm going to vote today."

Due to the pandemic, Pizza to the Polls has implemented new safety measures in 2020.

"Before, you could walk around with an open pizza box. Nowadays, that's not really what you want to be doing," Duncombe said. The organization has begun to send clearer handoff instructions for delivery drivers, and recently, it provided food trucks to park around the outskirts of lines.

Of all the foods in the world, though, why pizza?

First, there is a pizza place in almost every city in the country, Duncombe said. And as temperatures drop in November, "it helps to have something warm in your stomach."

And lastly, "pizza brings people together," Duncombe said. "It puts a smile on their face. And that's exactly the kind of attitude we want to have going into the polling booth."