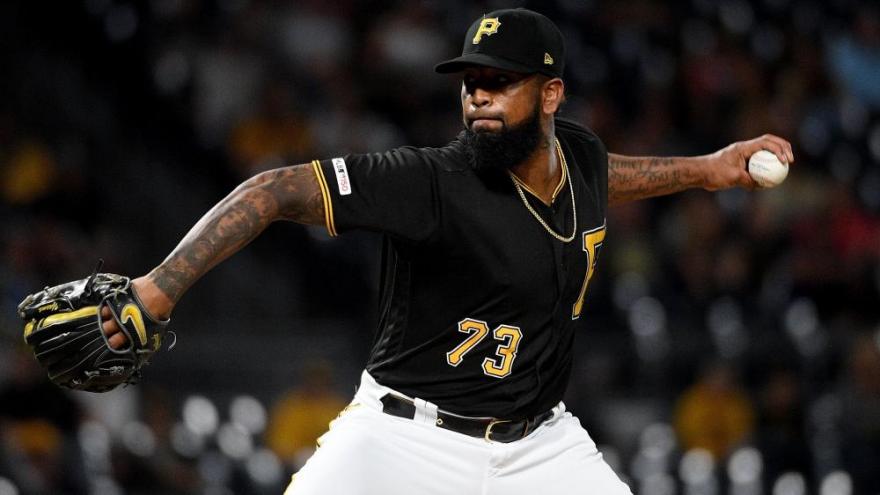 Pittsburgh Pirates' reliever Felipe Vazquez delivers pitch in the ninth inning of a game against the St. Louis Cardinals at PNC Park on September 6.

(CNN) -- Pittsburgh Pirates' all-star closer Felipe Vázquez was arrested Tuesday on a felony count of soliciting a child for unlawful sexual conduct using computer services or devices, and also faces serious charges in Pennsylvania, according to statements from authorities and court documents.

Vázquez, 28, a two-time All-Star who's among the National League leaders in saves this season, was arrested in Pittsburgh on a felony warrant from Lee County, Florida, according to a Florida Department of Law Enforcement statement.

He also faces one count of giving obscene material to a minor, the statement said.

He did not enter a plea in court, according to Pennsylvania State Police Trooper Stephen J. Limani.

Vázquez was also accused Tuesday in Pennsylvania of statutory sexual assault of a person who is under the age of 16 by someone who is at least 11 years older, unlawful contact with a minor, corruption of a minor by a defendant who is 18 years old or older, and indecent assault on a person less than 16 years old. The first two charges are first degree felonies.

Attorneys for Vazquez provided the following comment to CNN:

"We are in the process of reviewing both the Pennsylvania and Florida charging documents, as well as the underlying facts of the matter," attorney Jay K. Reisinger and attorney Michael A. Comber said. "At this time, any comment would be premature."

Vázquez was denied bail, according to a spokesperson for the arraignment court in Allegheny County, Pennsylvania.

"We take this matter, and these charges in particular, extremely seriously," Coonelly said in a statement. "We need to be respectful to all involved and the ongoing legal proceeding. As a result, the organization, our staff and players cannot comment any further at this time."

"Right now, as far as we know, they're just allegations," he said. "There's not a whole lot that we can say. But I do have a 14-year-old sister so it's something that hits home."

The team "talked about a lot of different emotions that were stirred up today in a lot of different places," manager Clint Hurdle added. They also discussed ways they can hold themselves accountable on and off the field, he said.

Vázquez's locker in PNC Park in Pittsburgh has been cleaned out, a Pirates spokesman told CNN Sports Tuesday. Signs featuring the left-handed pitcher at the ballpark have also been removed.

Florida law enforcement agents and Pennsylvania State Police served a search warrant at Vázquez's Pittsburgh apartment, where several electronic devices were seized, according to the statement.

The investigation began in August after authorities received information that Vázquez had "a reported sexual relationship" with a Florida resident who was 13 at the time, the statement said. The victim is now 15.

The statement said the girl continued to have "a relationship with Vázquez via text messaging and received a video in July from him in which he is shown performing a sex act." Vázquez allegedly told the victim via text message that they would meet for sex after the baseball season, the statement added.

Vázquez allegedly sent the victim photographs and a video from his cell phone on July 16, according to a state court affidavit filed in Florida. The Pirates had a game in St. Louis on that date.

The affidavit said the photos and video did not show the suspect's face but authorities were able to identify him through "numerous tattoos" about his body that are "unique and distinguishable."

The girl's mother discovered the photos, video and exchanges and texted Vázquez on July 23 to say her daughter is a minor, according to the affidavit.

The affidavit said Vázquez's cellphone was the "originating source" of the evidence, and that the victim referred to him by his first name in the exchanges.

The criminal docket paperwork for the Pennsylvania case said the alleged incident occurred in Scottsdale Borough on August 1, an off-day for the Pirates. The filing says Vázquez is awaiting a preliminary hearing on those charges.

Vázquez, who is from Venezuela, is being held in the Allegheny County Jail and faces extradition to Florida, authorities said.

Vázquez, who represented the Pirates at the 2019 All-Star Game in Cleveland, had a 5-1 record, with 28 saves and a 1.65 ERA this season. His 37 saves last season were the most by a left-handed pitcher in Pirates history.