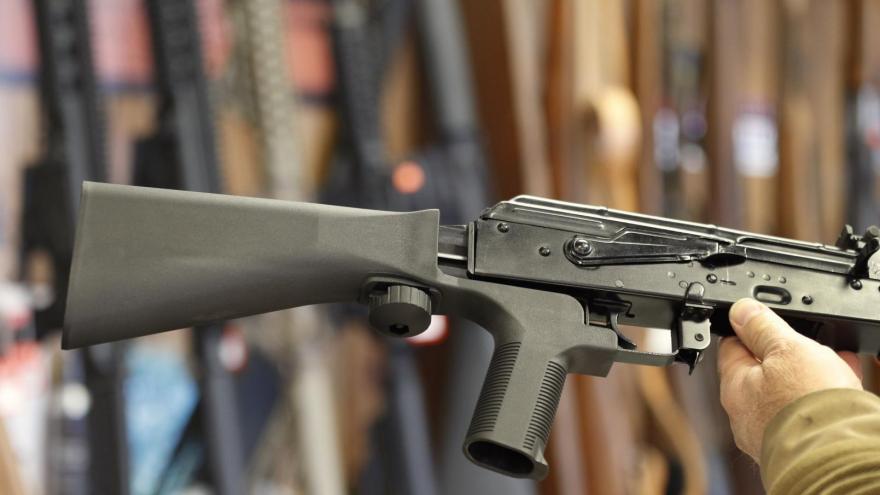 Three gun control measures were brought before the Pittsburgh City Council on Tuesday, less than two months after a man shot and killed 11 worshipers at Pittsburgh's Tree of Life synagogue.

(CNN) -- Three gun control measures were brought before the Pittsburgh City Council on Tuesday, less than two months after a man shot and killed 11 worshipers at Pittsburgh's Tree of Life synagogue.

If passed, the proposed laws will ban assault weapons and extended magazines from the city, as well as allow courts to temporarily take guns away from individuals deemed to pose a significant danger to themselves or others.

The proposals, which were unveiled on Friday, the sixth anniversary of the mass shooting in Newtown, Connecticut, are likely to face legal challenges from gun-rights advocates, who say the city council's proposed measures are illegal.

Erika Strassburger, city council member for the Squirrel Hill neighborhood where the synagogue shooting took place, said Monday that the effort shouldn't be seen solely as a reaction to the deaths at Tree of Life.

"Although that provided the momentum, this shouldn't be seen as a response to that event," she said.

Strassburger said the proposed laws were a response to "decades and decades of gun violence" in Pittsburgh and an "epidemic of suicide" nationwide.

"We acknowledge that there have been efforts at the federal level and by state lawmakers to amend our firearms laws," she said. "In light of those efforts going nowhere, we felt the need to take action on the local level."

Among the weapons that would be banned are any rifles with a pistol grip, folding stock and detachable magazine. The legislation specifically bans several AR-15 style weapons by name. The weapons — semi-automatic variants of the M-4 and M-16 type weapons issued to US troops — have been used in a plethora of shootings in the past few years, including the October 27 attack on the Tree of Life synagogue.

The proposals will also limit ammunition capacity in detachable magazines and most semi-automatic firearms to 10 rounds.

Devices that enable a faster rate of fire, such as the so-called bump-stocks used in last year's Las Vegas shooting that killed 58 people, will also be banned within city limits.

"This legislation is not only misguided, but it's illegal," Kim Stolfer, a gun rights advocate and co-founder of Firearms Owners Against Crime, told CNN affiliate WPXI.

According to state law: "No county, municipality or township may in any manner regulate the lawful ownership, possession, transfer or transportation of firearms, ammunition or ammunition components when carried or transported for purposes not prohibited by the laws of this Commonwealth."

The NRA did not immediately respond to a call on Monday for a statement but posted a statement on its website on Friday, pointing to the Pennsylvania state measure.

"The language of the statute is crystal clear. Municipalities like Pittsburgh may not pass their own firearms regulations. However, the simple statute wasn't simple enough for the reading challenged lawmakers of Pittsburgh and Philadelphia," the statement said.

"In pursuing their local gun control ordinances, [Pittsburgh Mayor Bill] Peduto and his anti-gun allies have demonstrated an extraordinary indifference to state law, judicial precedents, and the taxpaying constituents who will foot the bill for this political grandstanding," the statement said.

The NRA said it will use "all available legal avenues to ensure that the residents of Pittsburgh are never subject to these unconstitutional and unlawful proposals."

In a statement to CNN, Joshua Prince, an attorney for Firearms Owners Against Crime and the Allegheny County Sportsmen's League, said: "Contrary to what the mayor and city council believe, they are not above the law and will be held accountable for any action taken to enact these proposals."

City leaders have said they are ready for legal challenges, according to the Pittsburgh Post-Gazette, a CNN affiliate.

Peduto said the city has challenged the constitutionality of state laws before and can do so again, the newspaper reported. The mayor also rejected the NRA's position, according to the Post-Gazette.

Governor: We can't wait any longer

Should the laws pass, assault weapons currently owned by Pittsburgh residents will be grandfathered in. High-capacity magazines and accessories such as bump-stocks, however, will not; they will become illegal to own, regardless of when they were purchased.

The council will also consider empowering the city to temporarily take guns from those who law enforcement or family members deem a threat to themselves or others.

"We're doing it to protect our residents," Council Member Corey O'Connor, a co-sponsor of the measure, said Monday.

O'Connor and Strassburger both said they hope to work with other municipalities across the state to pass similar legislation.

"We want to build a coalition from the ground up that's going to fight for common sense gun laws," O'Connor said.

Pennsylvania Gov. Tom Wolf expressed support for the proposals in a statement Friday. "I stand in solidarity with all those in Pittsburgh and across the commonwealth looking to make their communities safer," he said.

"We simply cannot accept this kind of violence as a normal part of American life, and now we can't wait any longer," Wolf said Friday, WPXI reported.

Tim Stevens, a Pittsburgh activist and head of the city's Black Political Empowerment Project, thanked the council for taking on gun control during the public comment portion of Tuesday's meeting.

"There are rights, and there there's ridiculousness," he said.

"They had muskets," Stevens said of the framers of the Constitution. "You shot somebody, it was done. Now you can shoot somebody -- you can shoot a whole lot of somebodies -- in seconds."

"We found that out on October 27," he added. "We found it out on a regular basis in our African-American communities."

O'Connor told CNN Monday that the council planned to have public hearings on the matter. A final vote is not expected until February.

Officials hope the bills can be approved by February 14, the one-year anniversary of the fatal shooting at Marjory Stoneman Douglas High School in Parkland, Florida, that left 17 students and teachers dead, WPXI reported.