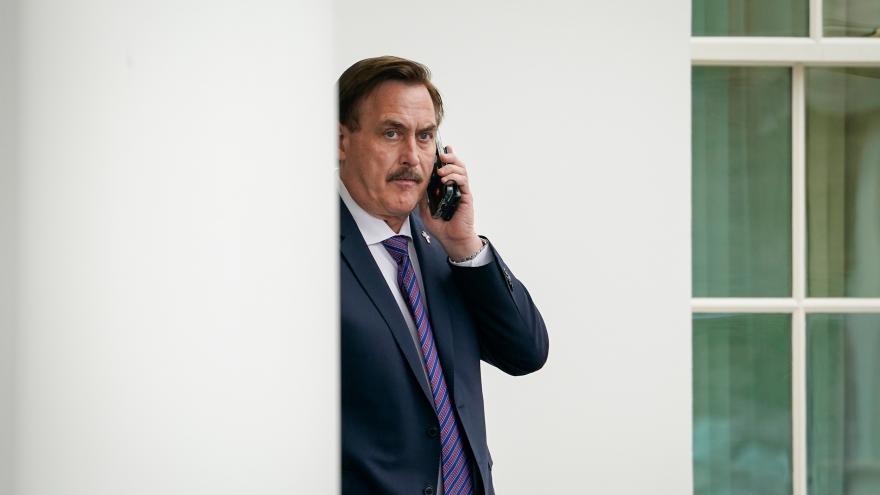 (CNN) -- Mike Lindell, CEO of My Pillow and prominent backer of former President Donald Trump's false voter fraud claims, said Tuesday the FBI served him with a grand jury subpoena for the contents of his phone as part of an investigation into a Colorado election security breach.

Lindell shared on social media and conservative media copies of a subpoena he said was served by the FBI.

In an interview with CNN, Lindell said agents asked him questions about Tina Peters, the Mesa County, Colorado, clerk who is facing state charges connected to a scheme that allegedly allowed an unauthorized person to access voting machines. Peters has pleaded not guilty.

The FBI is also investigating the security breach episode, CNN has reported.

Lindell said the FBI encounter occurred Tuesday afternoon while he was in his car in a drive-thru at a Hardee's restaurant in Minnesota.

On his internet show, "The Lindell Report," he said, "Cars pulled up in front of us, to the side of us and behind us and I said, 'These are either bad guys or the FBI.' Well, it turns out they were the FBI."

Lindell told CNN the agents presented him with the subpoena and asked for his phone.

Lindell initially objected, and consulted his attorney, but then relented and provided the device to the agents.

"I want to say this for the record, they were pretty nice guys. None of them had an attitude," Lindell said on his show.

Lindell told CNN he initially believed the agents were serving him with a subpoena as part of a large sweep of investigative activity in recent days related to the ongoing January 6, 2021, investigation. Agents told him it was unrelated.

An FBI spokesperson told CNN, "Without commenting on this specific matter, I can confirm that the FBI was at that location executing a search warrant authorized by a federal judge."

CNN has reached out to Peters' attorney for comment.