Pigs were spotted using tools for the first time, a new study says 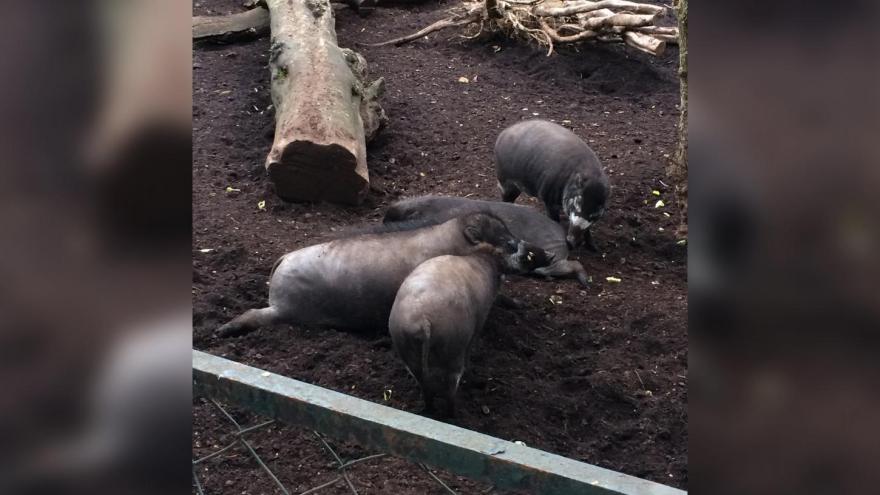 Pigs aren't heralded for their intelligence, but swine are smarter than they seem. They're test subjects in studies that lead to life-saving discoveries. They're reliable and beloved therapy animals. Thirty to 50 of them took Twitter by storm earlier this year in an early bid for the year's best meme.

(CNN) -- Pigs aren't heralded for their intelligence, but swine are smarter than they seem. They're test subjects in studies that lead to life-saving discoveries. They're reliable and beloved therapy animals. Thirty to 50 of them took Twitter by storm earlier this year in an early bid for the year's best meme.

Now, add handiwork to the list of pigs' accomplishments.

Researchers observed a family of critically endangered Visayan warty pigs using sticks to dig and build nests, evidence that the digitless swine are capable of using tools, according to a study in the journal Mammalian Biology.

Pigs aren't known for nest-building, and they certainly aren't known for their sophisticated use of tools. They'd never been observed using any before, a problem owed to their lack of digits and cloddish snouts.

Co-author Meredith Root-Bernstein, a conservation ecologist, stumbled across the findings at a Parisian zoo, where she witnessed an adult warty pig named Priscilla dig with a stick in her mouth.

"She would deposit some leaves, move them to a different spot on the mound, and dig a bit with her nose," she wrote in her observations. "At one point she picked up a flat piece of bark about 10 cm x 40 cm that was lying on that mound, and holding it in her mouth, used it to dig, lifting and pushing the soil backwards, quite energetically and rapidly."

Priscilla so captivated Root-Bernstein that she visited the exhibit again several times in 2015, 2016 and 2017 with a team of researchers who manipulated elements in the exhibit to see if and how Priscilla and her pen-mates would react to the tools.

The pigs didn't do much with gadgets during the first visit, but in 2016 Priscilla and her female offspring moved the sticks in a rowing motion to dig and build a nest.

Priscilla's mate Billie, also dug with a stick, though his attempts were "clumsy" compared to his female family members, researchers wrote.

In the 2017 trial, Priscilla dominated once again, using a stick to dig a whopping seven times.

But the study noted that digging with a stick in their mouths was less effective compared to digging with their hooves or snouts. So why, then, did the pigs do it?

Well, they may just enjoy it. Researchers said they might view tool use as a reward that "feels good." After all, it doesn't appear to be harming their nest-building.

But it could also be a behavior borne out of physical inadequacy. Or perhaps the behavior is truly beneficial to nest-building, and humans just don't know why yet. The study couldn't determine just why the pigs keep digging.

In any case, the behavior was likely learned among Priscilla's family. Visayan warty pigs live in family units and, much like human children, study each other to learn what goes right, according to the study.

Pigs had never been studied using tools before

Few species have been spotted using tools to their benefit, Root-Bernstein told CNN. Primates like chimpanzees and orangutans use them to forage for food. But pigs getting handy? It was virtually unheard of in science before her observation.

"Just using tools at all is very significant!" she said. "At the time, there were no scientific reports on tool use in any kind of pigs. That doesn't happen so often either."

Besides a win for pigs in the intellectual capacity department, the findings unlock a clue to how cognition evolves and how bodies are linked to their environments, she said.

"We might think that only humans manipulate the environment to affect their own lives, but in different ways many other species do this too," she said.