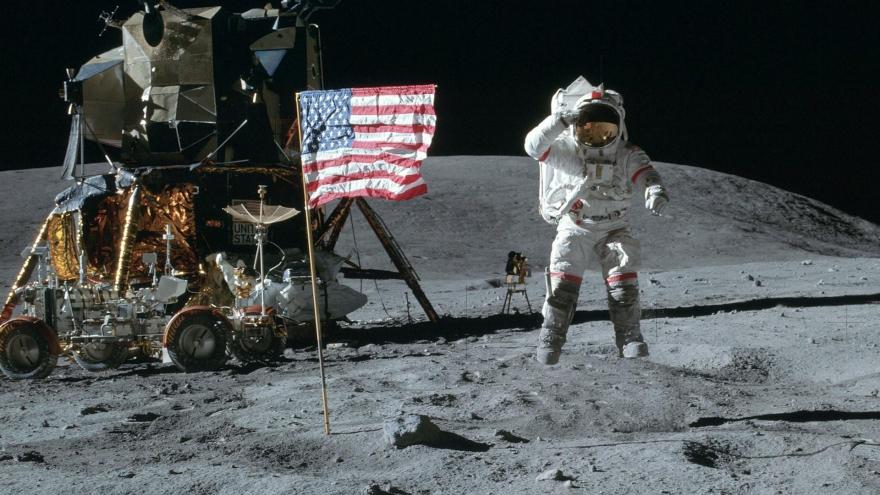 An auction house is selling a number of autographs, hardware and flown artifacts from the Apollo 11 mission just in time for the 50th anniversary of the first moon landing.

(CNN) -- An auction house is selling memorabilia and flown artifacts from the Apollo 11 mission just in time for the 50th anniversary of the first moon landing.

Among the items up for sale are a rare roll of film with images taken on the moon and a signed American flag that the crew carried with them into orbit.

The 70 mm film contains "126 of the most iconic images from the first lunar-landing mission," according to a statement from the auction house, RR Auction. Some of the images were taken by astronauts Neil Armstrong and Buzz Aldrin themselves.

Armstrong and Aldrin became the first humans ever to step on the moon on July 20, 1969. More than a half billion people watched that day as the pair stepped from the ladder of the lander onto the moon.

One image is Armstrong's first photograph after taking his historic first steps on the moon. Another shows the famous "Moon Man" image of Aldrin in a full-length pose.

The film was acquired by Terry Slezak, a member of the decontamination team at the lunar receiving lab at NASA's Manned Spacecraft Center, according to the auction house. Slezak was in charge of processing the film taken on the Apollo moon landings.

This roll of film sold for $11,718, according to RR Auction's website.

The American flag flown on the mission is signed and flight-certified by Command Module Pilot Michael Collins. It sold for $27,938.

Other items up for auction include Armstrong's Robbins Medal, which on the mission with him. The medal, which was produced by NASA for each Apollo mission, sold for $45,078. Also sold was a leather log book from Air Force One that was signed by all three Apollo 11 astronauts on August 13, 1969. The log book went for $8,264.

The auction closed on Thursday evening. The moon, meanwhile, hasn't been touched by humans since December 1972, when the astronauts with Apollo 17 left its surface.