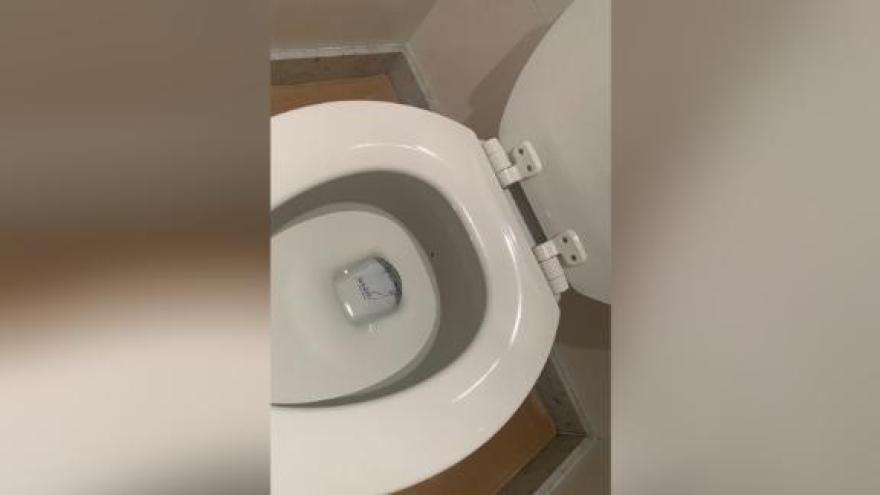 Maggie Haberman, a New York Times reporter and CNN contributor, is publishing the new images in her forthcoming book, "Confidence Man," and the images were earlier posted by Axios. CNN has previously reported how Trump flouted presidential record-keeping laws and would often tear up documents, drafts and memos after reading them.

He periodically flushed papers down the toilet in the White House residence -- only to be discovered later on when repairmen were summoned to fix the clogged toilets. Trump has denied the allegations, and in a statement given to Axios on Monday, a spokesman claimed that reporting about the practice was fabricated.

In the images revealed on Monday, it's unclear what the documents are in reference to -- and who authored them -- but they appear to be written in Trump's handwriting in black marker. Haberman said one image is from a White House toilet and the other one is from an overseas trip that was provided to her by a Trump White House source.

"Who knows what this paper was? Only he would know and presumably whoever was dealing with it, but the important point is about the records," Haberman told CNN's John Berman and Brianna Keilar on "New Day" Monday morning.

Trump had a pattern of disregarding normal record preservation procedures. In one occasion, Trump asked if anyone wanted to put a copy of a speech he just delivered up for auction on eBay, during a mid-flight visit to the press cabin Air Force One.

In other instances, Trump would task aides with carrying boxes of unread memos, articles and tweet drafts aboard the presidential aircraft for him to review and then tear to shreds.

A former senior Trump administration official said a deputy from the Office of Staff Secretary would usually come in to pull things out of the trash and take them off Trump's desk after he left a room.

A former White House official recalled that while document preservation was a key responsibility of the staff secretary, the rest of Trump's senior staffers lacked the sense of their obligation to maintain records of papers that moved through the West Wing.

Trump's haphazard record-keeping was the subject of a drawn-out fight earlier this year between him and the National Archives, and the Justice Department has been investigating the matter.