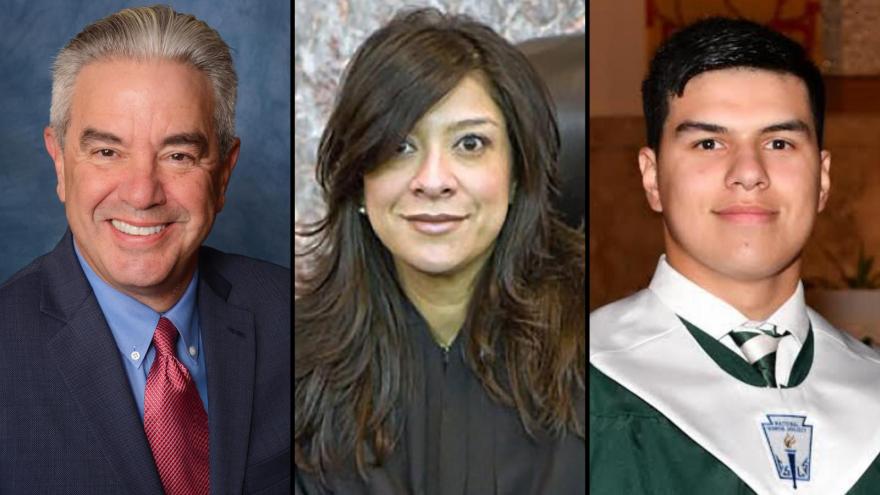 Officials found the name and photo of New York state's chief judge Janet M. DiFiore in a car associated with Roy Den Hollander, the man suspected of opening fire on Sunday at another judge's home.

(CNN) -- Officials found the name and photo of New York state's chief judge in a car associated with Roy Den Hollander, the man suspected of opening fire on Sunday at another judge's home, according to Lucian Chalfen, the Unified Court System Director of Public Information.

Federal officials contacted New York state Chief Judge Janet M. DiFiore after officials found her name and photo in the car, Chalfen said. The FBI agents did not indicate whether Den Hollander had intended to target DiFiore, he said.

On Monday, the FBI identified Den Hollander, an "anti-feminist" attorney with a long list of personal grievances and sexist and racist views, as the primary suspect in an ambush shooting at the New Jersey home of US District Court Judge Esther Salas.

See Also Suspect in fatal shooting at home of Judge Esther Salas described himself as an 'anti-feminist' lawyer, once argued a case before the judge
The judge's son, Daniel Anderl, a 20-year-old student at Catholic University, was killed in the shooting, and Mark Anderl, the judge's husband and a defense attorney, was injured, according to Freda Wolfson, US District Chief Judge in New Jersey. Judge Salas was unharmed, Wolfson said.

Mark Anderl is out of his second surgery and in stable condition, according to his law partner, David Oakley, who added that Anderl will need another operation Tuesday.

The discovery raises new questions about Den Hollander's mindset before and after the shooting and illustrates the dangers that judges -- particularly female judges -- face while carrying out their duties.

"We are in the midst of an investigation," Cuomo said, "but the circumstances are very troubling on this."

Authorities said Den Hollander is dead. His body was found in the town of Rockland in Sullivan County, New York, according to Trooper Steven Nevel of New York State Police.

Two law enforcement sources told CNN that the suspect died of what is believed to be a self-inflicted gunshot wound.

Initial reports from law enforcement said Daniel Anderl, with his father standing right behind him, opened the door to the family home to multiple gunshots, a law enforcement source told CNN. The gunman then fled, the source said.

A FedEx package addressed to Salas was found by officials in the vehicle associated with the suspect, according to a law enforcement source.

The gunman appeared to be wearing a FedEx uniform, a law enforcement official with direct knowledge of the investigation told CNN.

"We are aware of the media reports and are fully cooperating with investigating authorities," Jonathan Lyons, a spokesman for FedEx, said in an email statement.

The attack targeted a family closely entwined with the law. Salas became New Jersey's first Latina US District Court judge in 2011 after she was nominated to the bench by President Barack Obama and confirmed by the Senate.

Her husband Mark Anderl works as a criminal defense attorney with Anderl & Oakley, PC, which specializes in state and federal criminal defense and juvenile and municipal court matters, according to their website.

And their son Daniel Anderl, a rising junior at Catholic University in Washington DC, might also have had a future in law, Salas told New Jersey Monthly in 2018.

"I don't want to dissuade him, but I was pulling for a doctor," she said in the 2018 story. "He's been arguing with us since he could talk -- practicing his advocacy skills."

Suspect wrote extensively on his hatred of women

Den Hollander's extensive personal writings and legal work show his obsession with personal grievances and his abusive attitudes toward women.

He had unsuccessfully filed lawsuits against bars and night clubs offering "ladies' nights," claiming they violate the 14th Amendment. He filed suits against the federal government, challenging the constitutionality of its Violence Against Women Act -- the "Female Fraud Act," as he referred to it -- and against Columbia University, for its Women's Studies program.

Den Hollander argued one case before Salas in 2015, according to federal court records: a lawsuit where he represented a woman and her daughter as they sought to register for the military's selective service. In the case, Den Hollander's clients claimed the draft was unconstitutional because it barred women from registering.

He exited the case in June 2019 and handed it over to a team of lawyers at the large New York-based law firm Boies Schiller Flexner. He said he "would not be able to see the case through" because he was terminally ill, Nick Gravante, Boies Schiller's managing partner, told CNN on Monday.

In one of his writings, Den Hollander claimed he had been diagnosed with melanoma cancer in October 2018.

On his website, Den Hollander wrote an autobiographical document in which he personally disparaged Salas in racist and sexist terms.

While speaking about Salas, he claimed he often ran into trouble with female judges of Latin American descent, claiming they were "driven by an inferiority complex."

He attacked Salas' professional record and associations, and at one point, appeared to push a White nationalist belief that organizations are "trying to convince America that whites, especially white males, were barbarians, and all those of a darker skin complexion were victims."

In the so-called "Evolutionarily Correct Cyclopedia," Den Hollander made chilling remarks about "solutions" to what he called "Political Commies" and feminists.

"Things begin to change when individual men start taking out those specific persons responsible for destroying their lives before committing suicide," he wrote.