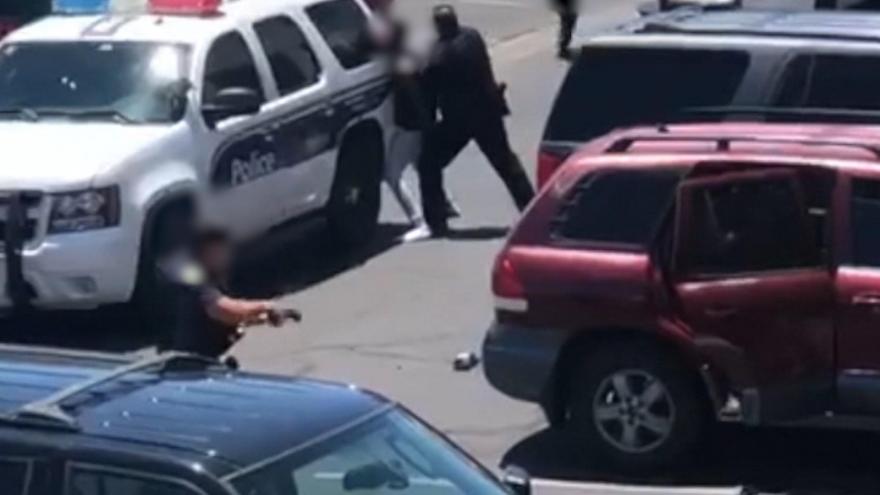 **Embargo: Phoenix, AZ** Phoenix police officers must now document every instance in which they point a gun at a person -- a decision that the city long considered but now has been made after recent public outcry about aggressive police tactics in Arizona's capital.

(CNN) -- Phoenix police officers must now document every instance in which they point a gun at a person -- a decision that the city long considered but now has been made after recent public outcry about aggressive police tactics in Arizona's capital.

From now on, Phoenix officers must fill out a form when an officer points a gun, and the incident will be reviewed by a supervisor, city officials announced Monday.

"When a gun is pointed at someone, that's a traumatic event," Police Chief Jeri Williams said at a news conference. "I think this is a first step in being ... that accountable, transparent organization that is willing to share what we do and how we do it."

The decision comes two months after a tense community meeting where residents vented about a well-publicized incident, in which video showed an officer pull a gun on a family during a shoplifting investigation outside a Phoenix dollar store in May.

The NPF made its recommendation after the city asked it to study a 2018 spike in officer-involved shootings in Phoenix (44 were reported that year, compared to a yearly average of 21 from 2009 to 2017).

"Our community has ... said that they want our police department to collect more data around the work they are doing in the field," Mayor Kate Gallego said at Monday's news conference.

"We know that what you measure is what you focus on."

Requiring officers to document when they point their guns at people is not unique. Cities with similar requirements include Dallas, Baltimore, Cleveland, New Orleans and Chicago, the foundation says.

How the data could be used

A Phoenix community panel had recommended gun-pointing documentation in 2015, when it was studying police relations with city residents.

It was not immediately clear how the city would publicize the gun-pointing data. But a co-chair of that 2015 panel, Carol Coles-Henry, told CNN affiliate KNXV on Monday the information could be useful.

City leaders and residents could use the information to learn how often guns are drawn, on whom they're drawn, and whether other actions could have been taken instead, she told KNXV.

"This gives an opportunity to tell the story factually," Coles-Henry said.

The police department initially resisted the panel's recommendation, saying in 2016 that it "had the potential to significantly affect officers' decision-making processes during critical incidents."

On Monday, Williams struck a more optimistic note -- suggesting that the documentation could also highlight what the department is doing right.

"I'm hopeful that we're about to articulate and document the number of times where we did, by policy ... point a gun at someone but at the same time de-escalated that, and didn't use that type of lethal force," Williams said.

Jeff Hynes, a Glendale Community College justice studies professor and a retired Phoenix police commander, is concerned that the new tracking could cause some officers to hesitate in life-threatening situations, he told CNN affiliate KPHO.

"If you have an officer take that reflective moment, that pause, it's going to reduce your numbers. But the other edge of that sword is, at what cost?" Hynes asked.

Williams, the police chief, said the May encounter outside the Phoenix dollar store still is under investigation.

"We are awaiting the results and awaiting due process to finish," she said.

In that incident, a Phoenix couple said officers drew guns on them in a parking lot after their 4-year-old allegedly stole a doll from the store.

Video from a bystander shows some of those moments: As one officer handcuffed a man, another officer pointed a gun at a vehicle. The officer holstered the weapon after a woman exited, holding a small child, with a second child by her side.

The woman had refused the officer's commands to put her hands in the air, and the officer feared that she was hiding something or was reaching for a weapon, according to a police report.

The couple filed a notice of claim against the city for $10 million, which serves as a precursor to a lawsuit. The two children who were with them were traumatized by the experience, the couple has said.

Police said stolen underwear also was in the couple's car. But the stolen property was returned, and store employees said they did not want to prosecute the case, so no one was charged.

The officers involved were put on desk duty, pending the investigation.