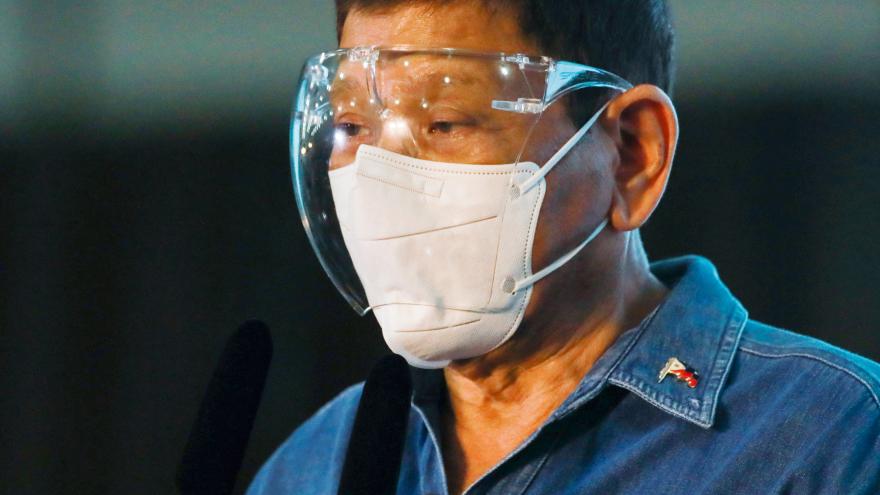 (CNN) -- Philippines President Rodrigo Duterte said on Saturday he would retire rather than run for vice president next year, in a surprise move that sparked speculation over his political future, according to the Philippines News Agency (PNA).

Duterte, 76, is barred by the Philippine Constitution from seeking a second term after his six years in office, but he said last month that he would campaign for vice president in the upcoming election in May.

His plan to pursue the largely ceremonial post was criticized by rivals and many Filipinos as an attempt to maintain his political power and avoid potential legal action at home or abroad.

But on Saturday, Duterte accompanied his longtime aide, Senator Christopher Lawrence Go, as he submitted papers to register for the vice presidential ticket in Pasay City.

"The universal sentiment of the Filipino has been reflected in the different surveys and in many forums, caucuses, and meetings to discuss what should I do in my life," Duterte said, referring to opinion polls that suggested the public opposed his plan, according to PNA.

A June opinion poll showed 60% of 1,200 Filipino adults surveyed believed his vice presidential run could violate the intention of the Constitution, PNA reported.

"And so, in obedience to the will of the people, who after all placed me in the presidency many years ago, I now say, sa mga kababayan ko, sundin ko ang gusto ninyo (my countrymen, I will heed your advice). And today, I announce my retirement from politics," he added.

Since coming to power in 2016, Duterte has presided over a brutal "war on drugs" that has left thousands dead, and experts say his attempts to seek a loyal successor are aimed at protecting him from potential legal action, either at home or by the International Criminal Court (ICC).

On Saturday, Duterte wished Go "all the best and good luck in his quest for the vice presidency" after having initially accepted the nomination to ensure the "continuity" of his programs, according to PNA.

Sara Duterte Carpio, 43, who replaced her father as mayor of Davao City and belongs to a different party, has given mixed messages about running, despite every opinion poll this year putting her as the number one presidential prospect, Reuters reported.

Boxing star Manny Pacquiao has also announced he is running for the presidency in next year's election, vowing to go after corrupted officials.