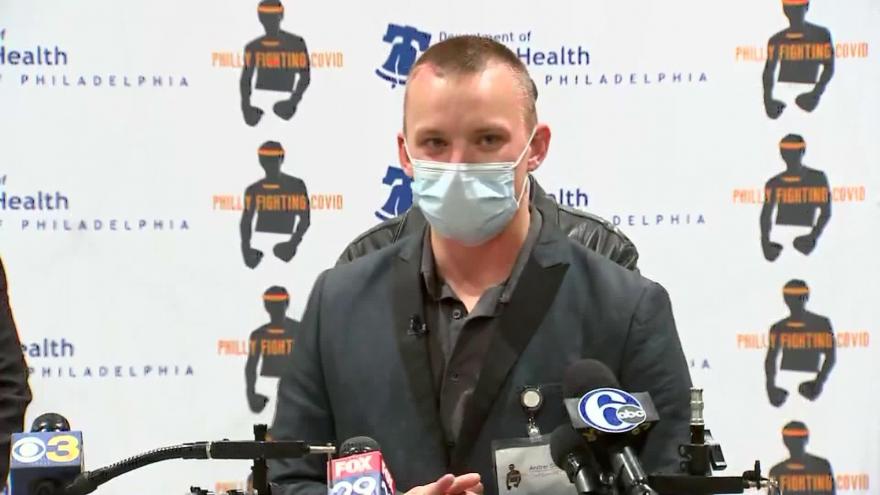 Andrei Doroshin, CEO of Philly Fighting COVID, is seen in this image from CNN affiliate KYW.

(CNN) -- The city of Philadelphia has cut ties with a Covid-19 vaccine provider, saying it lost "trust in them as an organization," after a slew of controversial moves by the group and its 22-year-old CEO, who admitted Thursday he took vaccine doses and administered them to four friends.

Additionally, Philly Fighting COVID (PFC) unexpectedly shuttered its Covid-19 testing operations to focus on vaccine administration and changed from a nonprofit organization to a for-profit entity -- a shift the health department said it learned about from local news outlets.

Concerns were also raised about changes to PFC's privacy policy that would allow it to sell patients' data collected through their online registration site, according to a report from a local news outlet.

"Trust is the most important thing we have when giving out vaccine, and we couldn't ask Philadelphians to trust an outfit that we no longer trusted," James Garrow, a spokesman for Philadelphia's Department of Public Health, told CNN on Thursday. "So we immediately ended the relationship."

The department announced Tuesday it "will no longer work with Philly Fighting COVID to provide testing or vaccines, effective immediately," following local news reports of growing concerns around PFC's operations.

WHYY, a public news outlet, reported on January 20 that the PFC's sudden shift to a profit-making business to "focus on vaccine operations" left some Philadelphia communities and residents without testing with no warning.

WHYY later reported on PFC's updated privacy policy, which Garrow told the outlet "could allow the organization to sell data collected through PFC's pre-registration site," though the city has no proof any data was sold. PFC's CEO has denied it ever sold any data.

On top of all that, 22-year-old CEO Andrei Doroshin said in an interview on NBC's "Today" on Thursday he had taken Covid-19 vaccines intended for eligible recipients and administered them to four of his friends.

Doroshin said he was trying to prevent the doses from going to waste and that he couldn't find anyone else who might need the vaccine more than his friends before they expired.

"The doses were about to expire," he told NBC. "We called everybody we knew. Every single person."

On Friday, Philadelphia Mayor Jim Kenney directed the health department to ensure that everyone who received a first dose of vaccine from PFC gets a second dose from qualified professionals.

He also called on the health department to produce a report on the city's failed partnership with PFC. Kenney said he was disappointed by what transpired with the organization but was relieved to learn that PFC was only allocated about 6% of the city's vaccine allotment.

"Still, this six percent represents thousands of Philadelphians eager to get their second dose," Kenney said.

Doroshin on Friday said he feels he is being used as a scapegoat for the city's "botched" vaccine effort.

"The city needs a scapegoat for why they botched the vaccine effort," Doroshin told CNN affiliate KYW. "They probably think they're embarrassed because a 22-year-old did a better job than they did."

On Tuesday, after the city announced it would no longer supply PFC with vaccines, Doroshin said in a statement he never hid the group's intentions to transition to a for-profit business.

"Vaccinating large groups of people takes resources, manpower, and ultimately financial help...We have always intended on scaling up the number of clinics to eventually vaccinate more people (we have been working for months on plans to scale-up vaccinations and have shared them with the city) and money is needed to do that," he said.

Doroshin said his PFC never had and "never would sell, share, or disseminate any data we collected as it would be in violation of HIPAA rules," and that "problematic" language in the company's privacy policy has been removed.

He also stated that his company pivoted from testing to providing vaccines because "we did not have enough resources to do both and made a choice to vaccinate as many people as quickly as possible, as we believe that is what will help end this pandemic."

Approximately 6,800 people received their first of two vaccine doses from PFC, according to the company. The city's health department says it is contacting everyone who received those doses to schedule their second dose with another facility.

PFC plans to have a news conference on the matter Friday, according to the Philadelphia Inquirer.

PFC was first awarded a contract from the city to provide Covid-19 testing services in August 2020, according to Garrow, the spokesman for the city's department of health. At the time, the group presented itself as a nonprofit.

Doroshin had previously been the subject of positive news coverage, focusing on his group's initial efforts to use a 3D printer to make face shields for hospital workers, before turning to testing, according to an NBC News report earlier this month.

It was mid-January when the health department "heard rumors of canceled testing events," but contracted testing providers are allowed to set their own schedules.

The health department later learned through news reports that PFC had canceled all of its testing events in mid-January, despite the fact the group is contracted to provide those services through January 31.

Garrow said Doroshin had "mentioned off-handedly" the group was considering switching to a for-profit entity in early January and was told it wouldn't be an issue, since the city has vaccine providers who are both for-profit and nonprofit. But the health department learned the change took place in December without its knowledge after news outlets informed health officials.

Philadelphia District Attorney Larry Krasner's office is reviewing allegations against PFC, according to a spokeswoman for the office.

In his own statement, Pennsylvania Attorney General Josh Shapiro said the allegations "are serious and any consumers who believe they have been misled should file a complaint with our office," either by phone or online.

"Taking advantage of people and their privacy under the guise of serving as a nonprofit is not only unethical -- it can also be against Pennsylvania law," Shapiro said.